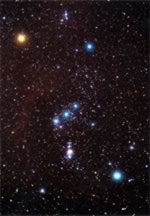 We lived in the country when I was a boy, far from the city lights. My father would take me outside at night and point to the stars. “That’s Orion,” he’d say, and he would help me trace The Hunter’s outline. “That’s the Big Dipper. The Big Dipper isn’t really a constellation, but it’s like one. And do you see that big red star over there? The one that doesn’t twinkle? That’s the planet Mars.”

I was in awe. A life-long love of space grew from this stargazing. Other astronomy highlights from my youth include:

Astronomy is a perfect low-cost hobby to share with children. If you want to introduce a kid to naked-eye astronomy, or if you’re curious yourself, find a copy of H.A. Rey‘s The Stars: A New Way to See Them. Rey — best-known for creating Curious George — published this book in 1952, but it’s just as useful today. How good is it? It was one of the texts for my college-level astronomy class. All 45 reviews at Amazon give the book five stars.

This book is meant for people who want to know just enough about the stars to be able to go out at night and find the major constellations, for the mere pleasure of it.

Normally I’d recommend borrowing this book from your local library, but The Stars: A New Way to See Them is so good and so useful that it’s worth spending ten bucks to own it. That one expenditure is all you need to enjoy naked-eye astronomy as a hobby.

Fun and easy astronomy projects include:

Astronomy is an excellent and cheap hobby. I haven’t spent a penny on it in years. Earlier this year, I released a free 400+ page book containing things to see every night of the year. We’re working on the 2007 version now, and it’ll be free too. There’s great advice in the book about how to get started, as well as plenty of links in the back.

Universe Today is a fine source for astronomy information. Other sites that I’ve found useful or fun include:

The news of Pluto’s demotion from Planet to Dwarf Planet sent shock-waves among the children I know. “If they can change this, they can change other things,” said precocious nine-year-old Lydia. “So why should I bother to learn anything?”

Six-year-old Antonio is concerned, too. He enters first grade this week, and he’s been learning about the solar system at home. He has a book on every planet, including Pluto. But now that it’s not a planet any more, what is he to do?

It’s great to see kids concerned about the subject. I love that their parents have taken the time to share the planets with them. Astronomy is a fun and inexpensive way to explore the universe around us.