Allow me to be sexist for a day.

Kris was working away Saturday, doing some chore or other, when she asked me, “What’s your schedule for today?”

“I don’t have one,” I said, and I could see that my answer made her tense.

“You are going to sweep the floors, though, right?” she asked, her voice filled with a blend of pleading and contempt.

I sighed, grabbed pen and paper, and drew a couple of diagrams that delineate the difference between how men and women view chores. 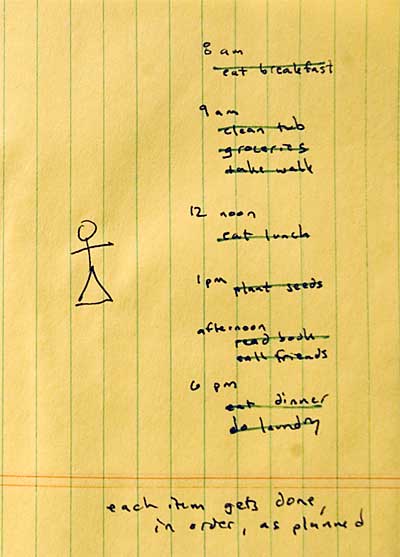 Men
Men have a cloud of chores. In his mind, a guy is aware of the things that need to be finished (which, of course, include those items on his “honey-do” list, but also include other things like sorting comic books or watching the latest episode of Beauty and the Geek). 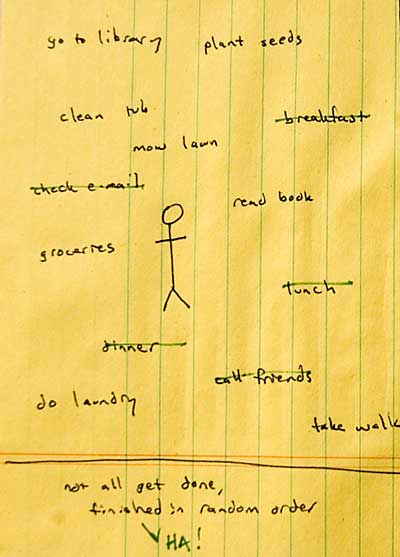 The man doesn’t attempt to complete these items in any particular order. He might start emptying the trash, for example, and notice that there’s a stack of books that needs to be sorted. Sorting the stack of books might not have been in the cloud of chores before, but now it is, and in fact it seems more pressing, so he begins to sort the books. After he’s finished, he sits down to admire his handiwork. While he’s sitting there, he turns around in the chair to check his e-mail. His friend Dave has sent him a message asking him to burn a copy of the latest Battlestar Galactica episode, so he does. He takes this disc downstairs so that he won’t forget it on Monday, and while he’s in the mud room he notices that it’s sunny, so he might as well get the peas planted since that, too, is in the cloud of chores. He goes outside to do this, but his wife comes up and says, “Let’s go for a walk.” They do. On the walk, she mentions that she’d like to rearrange the living room furniture. Now, re-arranging the living room furniture was neither in his chore-cloud nor on her list of chores, but when they get home, they spend four hours pushing chairs, arranging plants, shifting bookshelves, etc. When they’ve finished, the man is pooped, but he’s happy. He’s done a lot today. True, he didn’t finish much in his cloud of chores, but he did get a lot of other stuff done, and those chores will still be there tomorrow. Or next weekend. He’s pleased. His wife, who views his cloud of chores as a list of chores, is not happy. The list is incomplete. In fact, it has barely been touched.

Sometimes the answer to that challenge is Merry Maids.