On Saturday, Cody came over to hang out. In a lot of ways, it felt like we were kids again for an afternoon. (Forty-year-old kids but still kids.)

We spent several hours traipsing through nearby neighborhoods. We wandered through parks. We walked through Eastmoreland and imagined what it must be like to live in one of the mansions. We searched the hundred-year-old sidewalks, looking for clues about when they were poured and what the streets used to be named. For lunch, we stopped at Otto’s Sausage Kitchen. As we walked home on the Springwater Trail, we picked blackberries for dessert.

As I say, it was like we were kids again.

“How’s your back?” Cody asked during our stroll.

In April, Kim and I took surfing lessons in San Diego. While trying to “pop up” on my board, I felt my back give out. It hasn’t been the same ever since. And that’s just one of a long line of injuries that has plagued me this year.

“My back is better,” I said. “I’ve been seeing a chiropractor. I was skeptical at first, but there’s no doubt that my mobility has improved. I’ve even been able to do a bit of exercise this week.”

My fitness routine has been in the doldrums for most of the year — even before the back injury. Because of my injuries — and because of my workload — I haven’t exercised nearly as much as I need to (or want to). As a result, I’m fifteen pounds heavier than I was last year at this time. And that’s not fifteen pounds of muscle.

“How’s everything else going?” Cody asked. “I noticed you haven’t been posting on your blog lately.”

“Yeah, that’s a problem too,” I said. “I’m not just in the physical doldrums. I’ve been in the mental doldrums too. I haven’t written anything in weeks. It sucks. To be honest, I haven’t done much of anything for the past two months. I have a long to-do list, but I’ve ignored it all summer. I keep adding things to it, but nothing ever gets crossed off.”

“I get like that sometimes,” Cody said. “I’ll have a few days that are intensely productive and then it’s like I’m drained. I sit around and do nothing for a day or two — except maybe look at Facebook.”

“My pattern is a little different,” I said. “I’m productive for weeks or months at a time. But then something shuts off. Some switch inside my head is triggered and all I can do is watch TV, read trashy novels, or play videogames. After a few weeks in the doldrums, something toggles the switch in the other direction and suddenly I’m productive again.”

“Do you know what flips the switch on or off?” Cody asked.

“No,” I said. “I wish I did. My entire family seems to be like this. My brother has lost a lot of weight this year, for instance, but it’s because he’s completely devoted to his fitness program. He flipped a switch in his head and now he’s eating well and exercising. My cousin is like this too. It’s just a part of being a Roth, I guess.”

Note: I wonder if this “all or nothing” behavior style — something that both my ex-wife and current girlfriend have noted — is related to the relationship between moderators and abstainers.

“Fortunately, I’ve started pulling out of this current funk,” I said. “When Kim and I got home on Tuesday” — we took a long weekend motorcycle ride to the Oregon Coast — “we spent several hours cleaning the condo. The next day, I challenged myself to see how much I could get done on my to-do list. That was so satisfying that I did the same on Thursday. And Friday. I feel like I’ve turned things around. On Monday, I plan to sit down at my desk and start writing again.”

“Exactly,” I said. “When I’m in the doldrums, it’s just so easy to keep loafing, to keep doing nothing. But once I start moving, it’s as if that momentum has a life of its own. The trick is to force myself to get moving. That’s one reason that I like to exercise first thing in the morning. If I get out of bed and go to the gym, or if I get out of bed and go for a walk, then I know I’ve done that one important thing before the day has even begun. That knowledge helps propel me to do the next thing, and the thing after that. It’s like a snowball.”

“Exactly,” Cody said. “Plus, if you’re productive early, then if you reach midday and find you’ve run out of steam, you still have all of that stuff you got done in the morning. That’s satisfying.”

Cody and I continued to talk about life, the universe, and everything. We walked home, got on our motorcycles, and rode to the Portland Timbers match.

Sunday morning, I got up at five in order to participate in the Portland Bridge Pedal. By ten, I’d ridden my bike for fifty miles through the city streets. I was exhausted, but I felt good. I knew I’d exercised for the day. And this morning? This morning, I got up and started to write again.

It feels like I’ve pulled myself out of the doldrums, and that makes me happy. Being productive feels a lot better than loafing around all day. 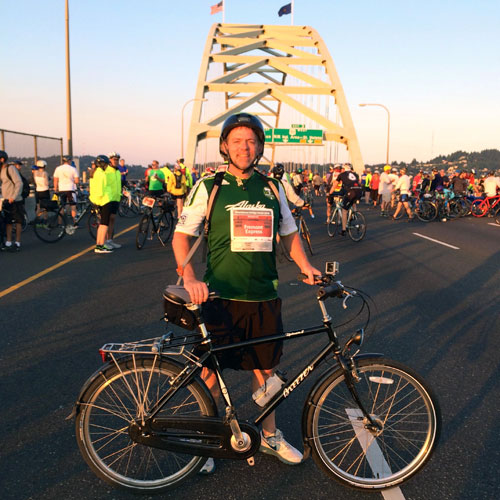 On the top of the Fremont Bridge, at the start of the bike ride.