Amy Jo, Frykitty — go away. You don’t want to be here today.

When I got to work yesterday, Jeff gave me news I’d been dreading. “Those dumb cats came from across the road this morning.” He meant that the kittens (who are no longer kittens) had discovered the wide open field across from the shop. For the six months that they’ve lived with us, our babies have stayed close to the office. We gave them a base of operations back in the tool shed, far away from the road. They have a warm, dry place to sleep there, as well as plenty of food. The eventual fate of most cats in this neighborhood is a resting place on the road, so we did our best to discourage them from going near it. And for a few months, it worked.

“I know,” Jeff said. “Plus, when I was pulling into my parking spot, Max was in the way. He froze in my headlights. He just stood there. I had to honk my horn to get him out of the way.”

A black cloud descended on the kitty-cat side of my brain. “Their days are numbered,” I thought. “Should I try again to convince Kris that we can take them home?”

This morning as I left for work, I told Kris about my worries. She’s not attached to my boys like I am, though, and to her it was just another story of life at the box factory.

It was a wet drive to work. The rain came down sideways in thick sheets. As I pulled into the parking lot, I breathed a sigh of relief that there were no little cat bodies on the road. My relief was short-lived. “Did you see Blackie?” Jeff asked.

Though I’m dressed nicely today in order to play Santa Claus to my customers, I trudged out into the monsoon, grabbed a shovel, and found Duke’s body at the side of the road. It was rigid, like a board, which I take to mean that he’s been dead several hours at least. Like most cats that are hit here, he only seemed to be sleeping. There was no blood. Except for the fact that he was soaked through, he looked exactly as he always did, sleeping on the chair in my office. 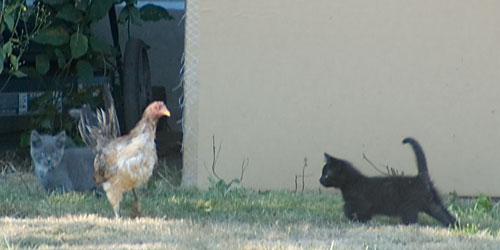 I will miss that little cat. I didn’t know him long, but I knew him well.

(Duke’s death brings to the forefront a huge moral quandary for me. I love Duke and Max. They’re great cats. I want to bring them home. Kris refuses. But if Toto were not there, she might be open to the idea. Toto is old an unpleasant. Ought I to get rid of her? But I’m bonded to her, no matter how much of a bitch she is. I’ve known her since the day she was born. She’s my familiar. But wouldn’t it make sense now to bring home Max and get rid of Toto? Which is more heartless? Leaving Max at the shop or abandoning my cat of thirteen years? Max loves it at the shop, though I don’t think he understand that Duke is gone. If I knew he’d be safe, I wouldn’t mind leaving him here. It’s a tough call.)