Ecuador 2013: A Short Visit to the Galápagos Islands

At last, after three weeks in Ecuador, I am home. I’ve actually been home for a week, but that week has been a whirlwind, and I’m only now finding time to write about the last half of my trip.

The Galápagos are filled with raw, natural beauty.

Most folks are familiar with the role this archipelago played in the history of science. As a naturalist aboard the HMS Beagle, the 26-year-old Charles Darwin spent several weeks surveying the flora and fauna of the Galápagos in 1835. His experiences there — and in South America an Australia — planted the seeds that grew into his theory of natural selection.

More than 25 years ago (!!!), I studied Darwin’s On the Origin of Species during my freshman year of college. Because of this, I thought I knew what to expect from the Galápagos. I was wrong. 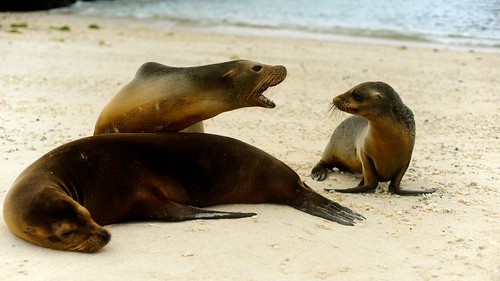 “Are you my mother?

The Galápagos Islands are an archipelago of volcanic islands some 620 miles off the coast of Ecuador. They’re a chain of small land masses still in the process of creation, floating on the “conveyer belt” of the Earth’s crust. The youngest islands are still being molded by occasional volcanic eruptions. The older islands, however, have had millions of years to mature. They sport lush ecosystems filled with fascinating plants and animals.

There’s lots to see on the Galápagos…

Most Galápagos tours are land-based. You fly to one of the handful of small towns and take day trips to nearby points of interest. I chose a boat-based trip through G Adventures, and I’m glad I did. My six-day tour included three nights aboard ship and visits to five of the thirteen major islands. It wasn’t enough. I plan to return to see everything at some point in the not-too-distant future. 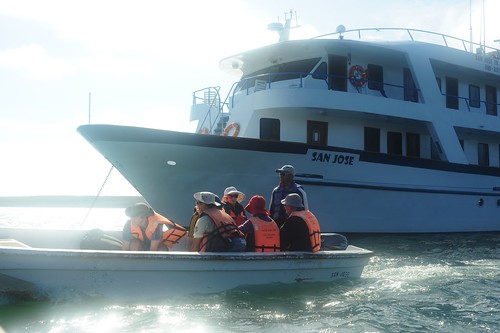 From our yacht, we took dinghies to the shore… 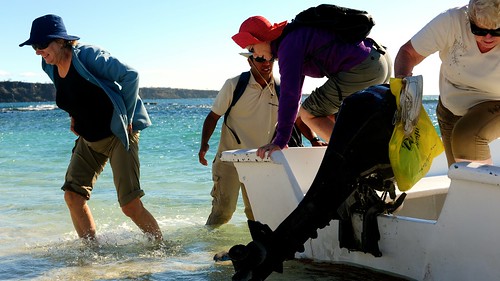 …where landfall was easier for some than others. 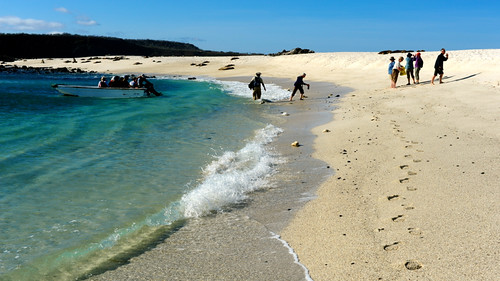 You have to be willing to get your feet wet on the Galápagos.

Some of my group of fourteen were disappointed by the land excursions because so much what we saw was similar from island to island. We saw iguanas (red here, green there, black everywhere), boobies (blue-footed here, red-footed there), frigate birds (so fun to watch!), gulls, owls, and — of course — sea lions. The sea lions rule the Galápagos. There are colonies of them on every island.

Everywhere you go, there are sea lions.

I, however, enjoyed the animal life. The diversity isn’t great because the islands are isolated. That’s kind of the point. And it was interesting to see that natural selection favored blue-footed boobies and red-skinned iguanas on one island while preferring red-footed boobies and green-skinned islands on others. 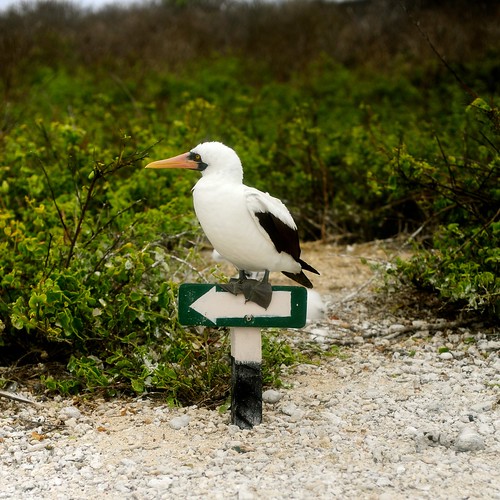 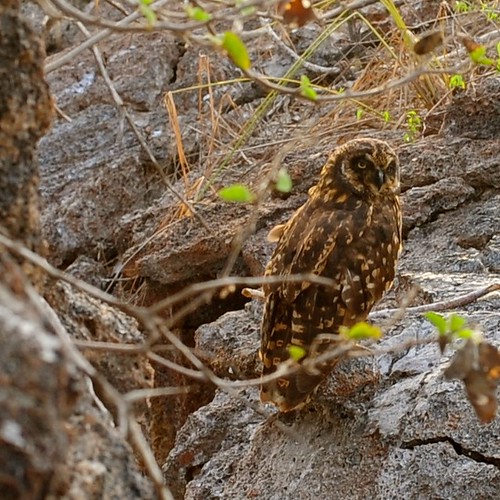 We spotted an owl on one island, which is rumored to be rare…

Plus, the Galápagos wildlife offers one huge advantage over any other animals I’ve ever seen: The creatures don’t care about humans. As in, they completely ignore us. Except for the bull sea lions, who will charge anything that enters their territory, the birds and the reptiles and the sea lions are perfectly content to come right up to visitors. If you’re not careful, there’s a real risk of trampling something. We were constantly dodging lizards. And once, while fiddling with my camera, I nearly stumbled onto a pair of sea lions napping in the carpetweed! 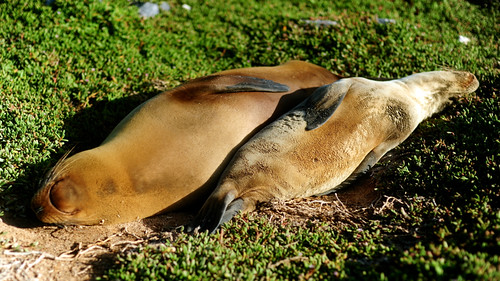 I almost tripped over this duo of snoring sea lions. 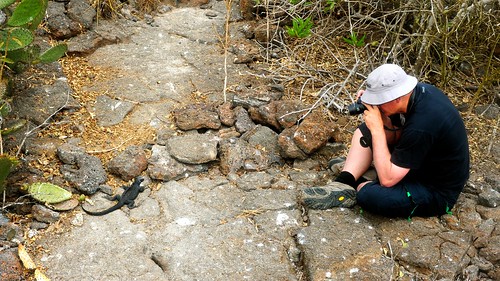 Brian bonds with an iguana… 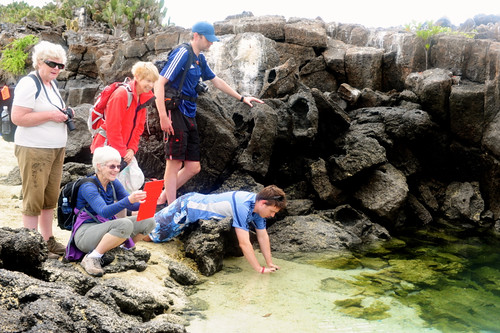 Even the fish in the tidepools would come say howdy…

The highlight of the trip for me, however, was the snorkeling. I’d never snorkeled before, and I’ll confess it scared me a little. But since I’m saying “yes” to life, I said yes to this. It was like drawing a winning lottery ticket. 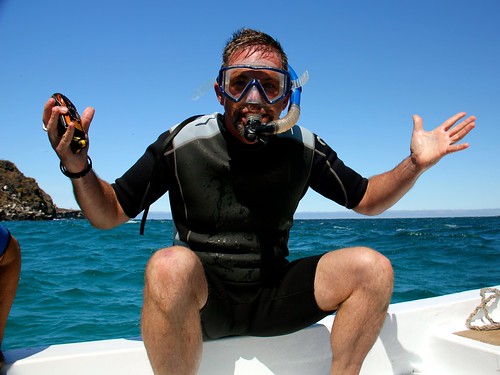 Preparing for my first dive… 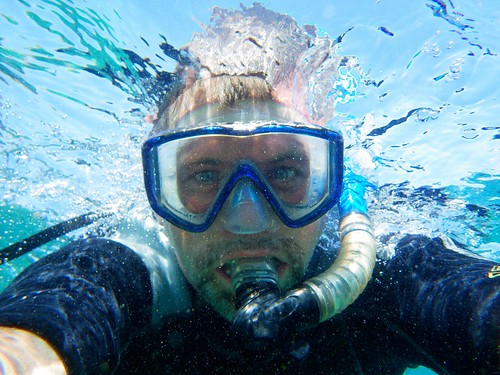 I splurged for an underwater camera. I’m glad I did.

Turns out I love to snorkel. It’s one of the best things I’ve ever experienced. When I put on the mask and look beneath the waves, I enter another world. An hour passes, and it seems like mere minutes. We snorkeled five times in my 72 hours on the boat. I could have done twice as much. 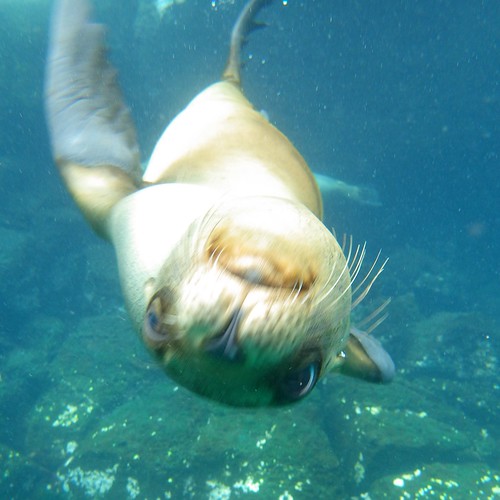 I was sad, however, to have missed the giant tortoises. They’re one of the main reasons I made this trip, and I was looking forward to getting up close and personal with them. It was not to be. On the morning I left the group, they continued on for tortoise-viewing. Before I left, though, they had a little fun with me; they found some tortoise footage on DVD and played it for me on the TV in the boat’s main cabin. 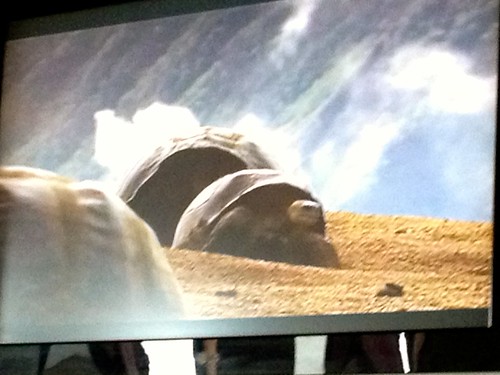 This is as close I got to the giant tortoises 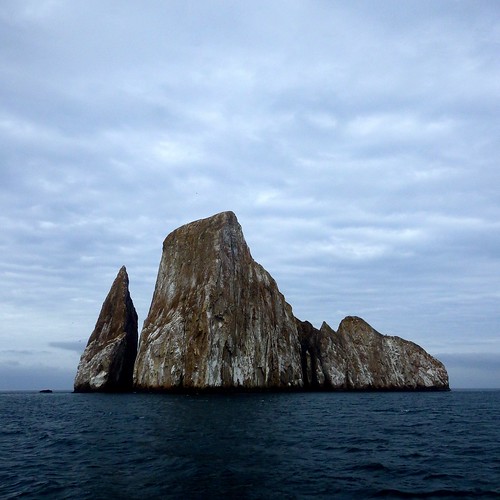 Kicker Island, where we did a final round of snorkeling…

Alas, my time in the Galápagos was all to brief. Before I knew it, I was back in Quito. And once there, I was pining for home. 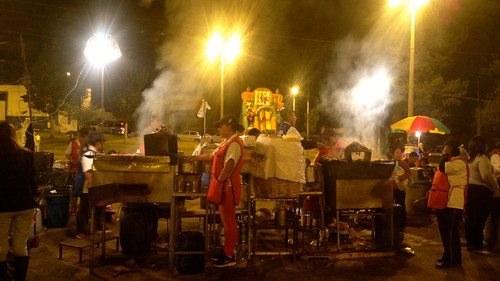 Quito is not without its charms, but the Galápagos are better…

Ecuador was marvelous, and I’m certain to return. Now, however, it’s back to Real Life. For the past week, I’ve been working hard on three different projects: my role at Fincon in three weeks, starting an online magazine, and (most importantly) writing an ebook about how to achieve financial independence. 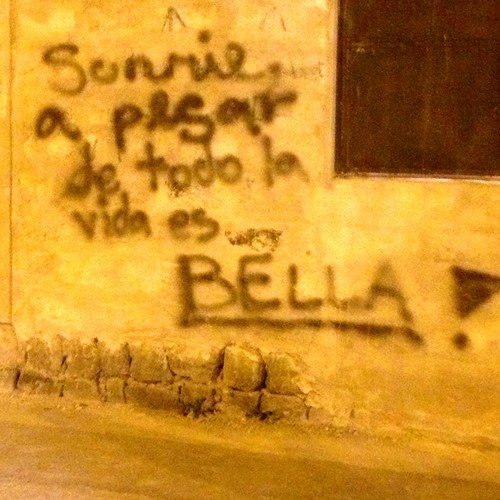 Graffiti in Quito: “Smile…in spite of everything, life is beautiful!”

Now I need to decide where to go next. The 2014 travel catalogs have begun to arrive, and they’re filling my head with visions of far-away places. Should I go to Australia and New Zealand? Kenya and Tanzania? Madagascar? Thailand and Vietnam? Wherever I go, I want to take Kim with me. This is the second September in a row that I’ve gone on an adventure without her. I don’t like it. I want us to travel the world together!