Note: This article is from J.D. Roth, who founded Get Rich Slowly in 2006. After a year off, J.D. is once again writing here at GRS. His non-financial writing can still be found at More Than Money.
¡Saludos de Ecuador!

For the past two weeks, I’ve been enjoying my third trip to that seldom-remembered continent, South America. I love this place, and love it more each time I visit. My past trips have been personal excursions for pleasure and introspection. But this trip was primarily business-related. (I am in the Galápagos at the moment, and that’s just for personal edification — unless we count the tortoise photos, which could be used for GRS promotion.)

You see, earlier this year, my colleague Mr. Money Mustache contacted me to ask if I’d like to take part in a chautauqua produced by Cheryl Reed of Above the Clouds Retreats. Of course I would! It’s my policy to say “yes” to requests like this. And so for one week in early September, MMM and I joined Cheryl and jlcollinsnh to present our philosophies to an enthusiastic group of 22 participants, most of whom were women and most of whom had reached (or were well on their way to) Financial Independence.

MMM has already shared his lessons from Ecuador. Today, I’ll share mine.

Note: At my personal blog, I’ve already posted photos of the trip and raved about the non-financial outcomes. This article will be about the financial lessons I took away.

Cheryl came to Ecuador on a volunteer vacation sixteen years ago. She did physical therapy for poor and disabled children. She loved the country, and was struck by the poverty. Five years later, she bought a 24-acre farm in the tiny community of Santa Elena, a couple of hours north of Quito. She’s tried (and failed) to farm various crops. At the moment, she’s farming coffee. She spends six months out of every year here; the rest of the time, she lives in the States.

Cheryl is passionate about improving the quality of life for the Ecuadorian people, especially those in Santa Elena. She sponsored one local boy through college, and she intends to sponsor more. She donated a laptop computer to another girl who wants to pursue a degree. And a portion of the “profits” from our week-long retreat will all go to Project One Corner, Cheryl’s charitable organization that works to improve her tiny corner of this planet. 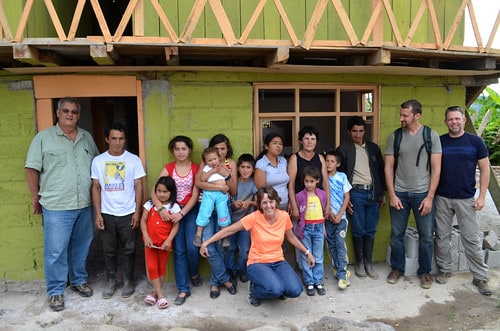 Some of the “profits” from our retreat will help families like this in Santa Elena.

Moved by Cheryl’s dedication to her community, MMM, jlcollinsnh, and I all donated our speaking fees to her cause. She used $1,500 of this money to help the above family rebuild their tiny home, which was severely damaged in an earthquake last year. This family of fourteen has been living in a chicken coop since then; with the money we contributed, they’ve been able to make their home livable once more.

During the prep for the chautauqua, we talked a lot about financial equivalencies. “The $1,500 we gave to that family is an espresso machine for some people at home,” MMM observed. “When I see that somebody needs help, and I see that I could help them with just half a day’s work, well I can’t say no.”

“I know,” Cheryl said. “At the end of our retreat, we’ll have a nice dinner at a restaurant in Quito. The first place I contacted wanted $42 per person. I couldn’t do that. That’s $1,200. That’s almost as much as it took to fix up that family’s house. I chose a cheaper place instead.” 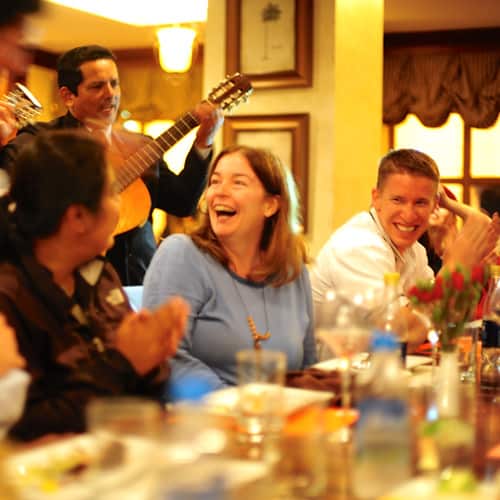 The “cheaper” farewell dinner was still lavish and fun.

Prior to this week in Ecuador, my exposure to Mr. Money Mustache’s philosophy was limited. I admired his presentation on how to blog last year at the Financial Blogger Conference, and spent an hour talking with him after he’d finished. But I’ve had more contact with Mrs. Money Mustache since then. (“She likes your writing,” MMM told me on the plane form Houston to Quito. “You’re all warm and fuzzy and not a bossypants like me.”)

But after spending ten days with MMM, I’m a convert. I’m in the process of reading his blog from start to finish. (You can too!)

A short summary of the Mustachian Way: MMM believes that this whole “get rich slowly” business is BS. He advocates getting rich quickly — but not through any magical means. The core of his philosophy is adhering to an extreme savings rate. If you can save 50% of your income, you can achieve Financial Independence in seventeen years. Bump that savings rate to 75%, and you can do it in seven years.

“I call this the shockingly simple math behind early retirement,” MMM said.

In general, Mustachianism emphasizes cutting costs. MMM believes that households with incomes greater than $50,000 per wage-earner have no excuse for not building substantial savings. He says it’s still possible to enjoy a luxurious life on much, much less. (He and Mrs. Money Mustache raise a young lad on $30,000 in household expenses.) The problem is that most people have a million excuses as to why they can’t reduce their luxuries. They drive SUVs instead of biking. They have cable television. They buy books and clothes and kitchen gadgets instead of finding low-cost (or no-cost) alternatives. As a result, they choose to postpone retirement until age 65 (or later) instead of retiring at 35. 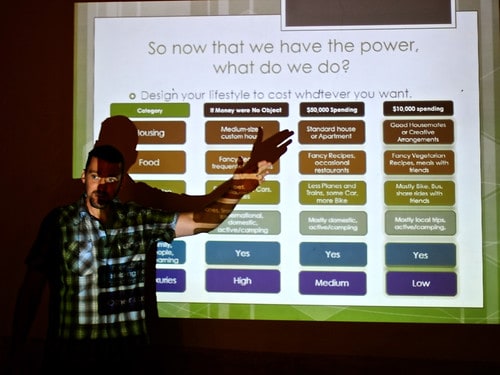 MMM shares his Mustachian vision for happiness and lifestyle design.

“The principles on my blog are that you can be happy with less consumption and more hard work,” MMM told me.

The attendees at our chautauqua were all living proof of what’s possible through extreme saving. Not all of them had achieved Financial Independence, but every single one owned responsibility for their current financial situation. Those that weren’t yet at FI see the path and know what to do. (And, in general, are very young.) Those that had achieved FI did so through extreme saving, careful investing, and optimizing income.

As part of the retreat, I met with thirteen of the 22 attendees. Nearly all of them showed me their financial situation. Most had achieved FI. The average person to have done so was a woman in her mid-forties who still continues to work because she likes what she does. But she could quit at any time and live comfortably for the rest of her life.

What about increasing income? MMM recognizes the value of doing so, but it’s not his focus. “I like to make fun of the ‘earn more’ crowd, even though I think earning more is a good thing,” he told me. “I just think it should be a by-product of being an ethical businessperson. Plus, my secret mission is to reduce the world’s consumption of Stuff, so I focus on that.” 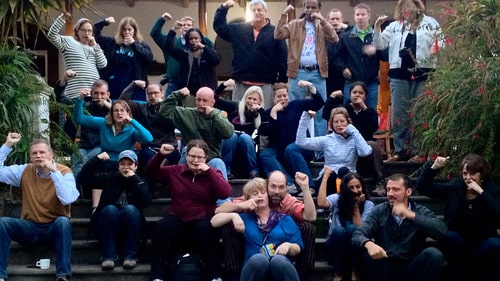 During my ten days with these fine folks, I didn’t just learn about Mustachianism.

Jim (who is known by jlcollinsnh online) gave a short, sharp presentation on how to invest. In short: Stick as much as you can in index funds, then ignore the account. Let the money grow. Resist the temptation to think you’re smarter than the market.

Jim also talked about the importance of “FU money,” having enough cash in the bank that you’re not tied to your job. Most people have so little saved that they’re tied to their jobs. They have no flexibility. But FU money is the little brother of FI. It gives you freedom to choose better opportunities.

Jim told a story about when he was younger (many, many years ago!), he was working at a job he liked. He wanted to take a few months off to travel to Europe, but his boss wouldn’t have it. “Fine,” Jim said. “I’m quitting.” He had saved $5,000 on a $10,000 salary, and that was FU money for him. Surprisingly, this shifted the balance of power. Suddenly his boss was more receptive to the suggested sabbatical. Jim got to take the trip and then return to a job he loved â€ all because he’d saved enough to walk away, if needed. 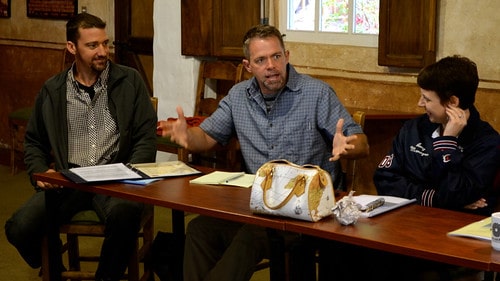 MMM and Amy O. look on as I make some brilliant point

Anita from Chicago — a corporate lawyer — is in her early thirties and just couple of years from being able to retire. How did she do it? Through very Mustachian extreme saving. She keeps her expectations low. “I have everything I want,” she told me. “I just don’t want very much.”

Val — who has been something of a nomad these past few years — has so much saved that she never has to work again. But this week, she just took a job that pays her more than she’s ever made in her life. Why? Because it sounds like fun. Val praised the power of Financial Independence: “FI takes away the wall of worry,” she told me. “You can just do what you want.”

I also enjoyed talking with the folks who aren’t very far along on their financial journey. Lise is a librarian from London, Ontario. She’s scared to invest, so her money is just sitting in a savings account. She’s overwhelmed by the options, and afraid to make the wrong choice. I hope my conversation with her — and Jim’s presentation — helped to remove some of that fear.

Note: My own presentation was about fear, flow (or happiness), and freedom. I talked about making meaning in your life, and about putting your own happiness first. I’ve uploaded the PowerPoint slides for my presentation. I’ll post a written version soon. It’ll appear at my personal site — or maybe at MMM’s site, if he’ll take it as a guest post.

I particularly enjoyed the time I spent with Jesse Meacham. Many of you probably know Jesse as the founder of You Need a Budget, the popular software that’s been helping folks for almost ten years. I’ve interacted with Jesse for years, but never met him until now. He’s awesome: a cheerful, open-minded, Crossfitting nerd who tells fantastic stories. He kept us all entertained for hours during cold nights at the hacienda. 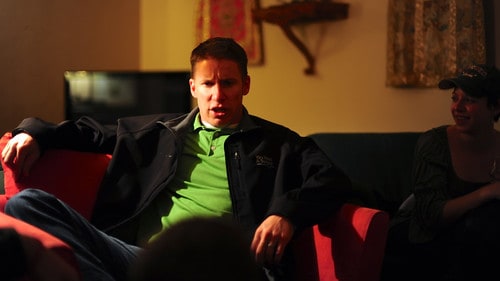 Jesse shared lots of great insights into financial management — and life. Gems like this:

At the end of a week of “crazy rich-person talk” (as MMM called it), everybody felt inspired to continue working to financial and personal freedom. But we also felt inspired to spread the wealth to others. For instance, MMM “hatched a slightly crazy plan to look into buying the 24 acres adjacent to Cheryl’s existing farm to turn it into a permanent gathering point which also generates money for charity.”

As for myself, this experience showed me the power of small-group gatherings. I’ve done a lot of organizing of and speaking at large conferences (such as World Domination Summit), but never participated in something like this chautauqua. It won’t be the last time. I have a slightly crazy plan of my own. I’m going to organize something similar much closer to home. Look for some sort of retreat here in Oregon in late 2014 or mid-2015. I look forward to more “crazy rich-person talk” — this time with you.