Note: I apologize for the delay in posting the story of our trip to Europe. As in 2007, we found it was actually tricky to find internet access abroad. And though we’ve been home a week, now is the first time I’ve had to write about our adventures. I plan to post day-by-day updates for Italy, and then three updates total for France, so this travel journal will have about 13 parts! Starting with this one.

Kris and I woke at 3 a.m. on September 25th to shower and finish packing. Tiffany drove us to the airport, where I actually managed to make it through security without incidence for once. (I always get stopped at security for one thing or another; I was stopped on our flight home from this trip!)

For our flight to New York, we were seated near the rear of the plane where we were surrounded by a large group of Ukrainians who drank copiously and bantered boisterously. One of the two bathrooms behind us had a faulty locking mechanism, so a flight attendant place it out of order, which produced long lines for the loo during the entire flight.

At JFK, we disembarked through the exact same gate we flew home from the last time were here, coming back from England in 2007. After walking to the far end of the terminal to wait out our four-hour layover, I passed the time by doing body-weight exercises: sit-ups, squats, lunges, and so on. I was very worried about going “soft” on this trip.

The flight from JFK to Venice was uneventful. We watched TV shows and movies and played videogames on the iPad. We dominated in-flight trivia. (I always dominate in-flight trivia. I had the top score for the flight, as usual.) Kris napped a little; I did not.

Arrival in Venice
After our flight landed in Venice, we cleared customs quickly (it’s only in the U.S. that customs takes forever) and walked to the waterbus (or alilaguna) terminal. The waterbus follows a heavily-tracked aqua-highway marked by hundreds of wooden pilings. Boats ply their way along this dredged canal (outside the pilings, the water is very shallow), speeding from the mainland to the island city of Venice. 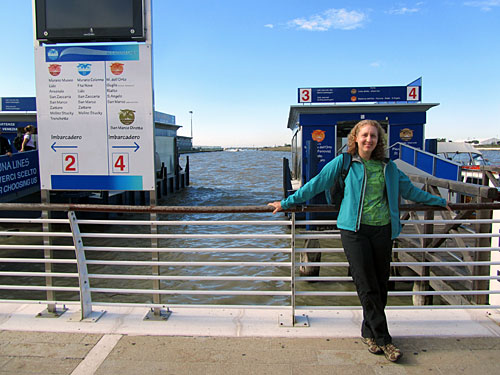 Kris, waiting for the alilaguna/waterbus to take us to Venice

The waterbus let us off at the Ponte di Rialto stop. The Rialto Bridge is the oldest of the four bridges that span Venice’s grand canal; the first bridge here was built in 1255, and the current bridge was completed in 1591 — when Shakespeare was alive.

From the Rialto Bridge, we made our way through the heavy crowd to the nearby Pensione Guerrato, our hotel. Immediately it was clear that Venice was like nowhere else we’d ever been. The city is built atop more than 100 small islands, and most of the buildings are hundreds of years old. The cobble-stone streets are often very narrow, and you’re constantly crossing bridges as you move from one place to another. Because of Venice’s nature, wheeled vehicles make no sense. Not even bikes. (You’d ride your bike 50 feet and then have to stop to carry it across a canal!) All traffic is on foot — or by boat. It’s awesome! 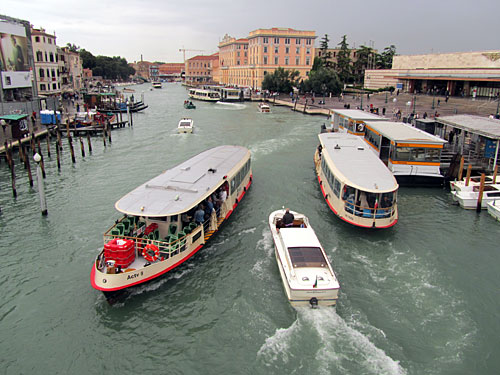 Water traffic on the Grand Canal, just in front of the train station (low building on right)

By 1300 hours in Venice, I’d been awake for 25 hours straight. It took almost precisely 24 hours to reach our hotel room from the time we woke up in Portland the morning before. (Which was 3 a.m., as you’ll recall.) Our goal was to go until 1900 or 2000 and then crash, so we showered and headed out for a much-needed meal.

We ate outside in the sun (too hot for me, just right for Kris) at Trattoria da Bepi. We were surprised at how well the staff spoke English — well enough to joke around with us. (But, as we’d learn, this was par for the course in the touristy spots of Italy.) I had mussels and chicken kabobs and 375ml of prosecco, Italy’s sparkling wine. (Note: Unlike most of the reviewers at the site I linked to, we found Trattoria da Bepi to be just fine. Nothing great, but not bad either.)

A quick walk through the city
After lunch, we wandered the wide boulevard of Strada Nova (the “new” street) toward the train station, over the bridge, and then back to the Pensione Guerrato. Along the way, we learned how Venice’s streets twist and turn like a fantastic maze. They also change names constantly. For example, Strada Nova started as Sesiere Cannaregio and ended as Rio Terá de la Madalena and Rio Terá San Leonardo. Confusing! 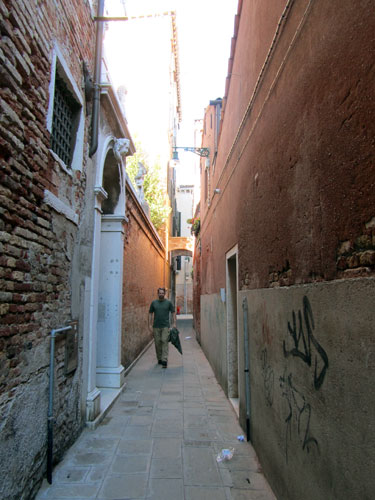 J.D., walking down a narrow street in Venice

The streets were crowded on this warm Sunday afternoon. We stopped for two scoops of gelato each, the first of many such scoops we ate in Italy. We also looked through a Venetian supermarket.

Our exhaustion and different travel styles — Kris wants everything spelled out, but I’d rather go with the flow and make things up as we go along — led to short tempers in Venice. Kris wanted answers to questions I couldn’t give her (“How will we know where and when to board the waterbus?” “Where does this street go?”). I’m perfectly content just muddling my way through, making mistakes as I go along. That means I’m willing to trust my gut in the tight and twisty unmarked streets, while Kris would rather verify that every street is either right or wrong before continuing. So we bickered.

Mostly, though, we were just tired and hungry.

Note: I know some people don’t like it when I write that Kris and I bicker, but come on! We bicker, just like all couples. And we often bicker while traveling (or doing home remodeling). To deny that is stupid, and to pretend we’re something we’re not. But we love each other even when we’re fighting.

After nearly 30 hours without sleep, I was ready to drop. So that’s what I did. After we finally made our way back to the hotel (it was a long walk), I crawled into bed and slept for twelve hours. 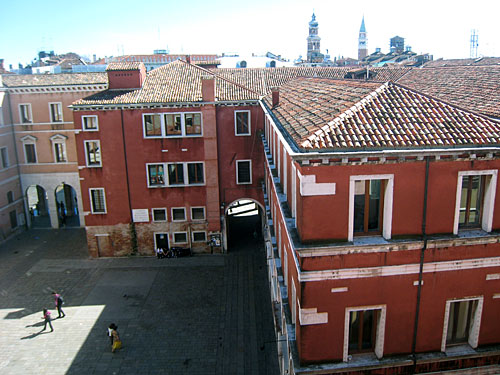 The view from the Pensione Guerrato 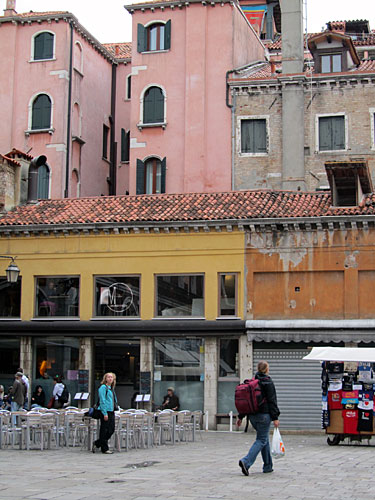