After nearly twelve hours of much-needed sleep, Kris and I both woke at 4:30 a.m. We read and wrote in our journals. I was famished, so I ate some of my stash of airline snacks. (On the flight to Venice, I’d carefully avoided the peanuts and pretzels — I wanted to stick to my diet!)

At seven, we headed down to the breakfast room of the Pensione Guerrato. There we had the first of many continental breakfasts, all of which consisted of hard rolls, yogurt, cheese, granola, and coffee (for Kris) or orange juice (for me).

Note: I hated these breakfasts at first, but by the time we left Paris, I had become accustomed to them. In fact, I liked them. My breakfasts now that I’m home? A hard roll, a slice of cheese, some smoked salmon, and maybe a glass of grapefruit juice.

After breakfast, we took the train to Padua (or Padova, as it’s known in Italy), about thirty minutes inland. We were both very nervous. This was the first time we’d ever ventured out on our own in a land where we could not speak the language. (I had studied a little Italian before we arrived, but only a very little.) Plus, we were both anxious about pickpockets. Everything we read warned us about pickpockets in France and Italy. (And as many of you know, Kris had money stolen from her purse within 15 minutes of arriving in London in 2007, so we know pickpocketing occurs!)

But we didn’t have any trouble.

We walked to the Scrovegni Chapel, where it took us about twenty minutes to figure out how to enter. (I’m not kidding!) We were able to take the tour despite not having reservations. We spent fifteen minutes looking at the frescoes by Giotto. Alas, we were not allowed to take photos — and a docent stood by to enforce the rule.

Later, we walked down to the university district and looked at the produce market. Many Italian cities have these semi-permanent open-air markets where vendors sell flowers, fruit, fish, meat, vegetables, and more. They’re like our farmers’ markets, but they occur every day instead of once a week. 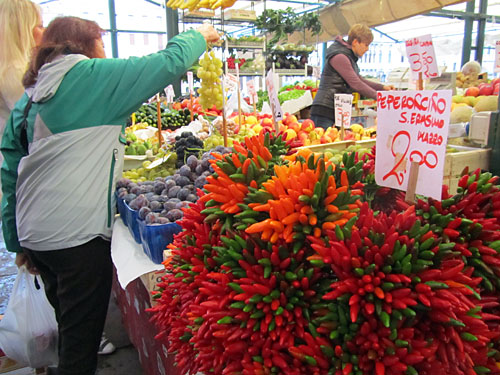 Shopping for produce at the Rialto market in Venice 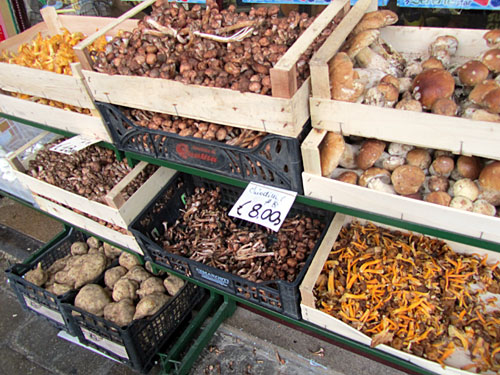 Mushrooms at the market in Padua 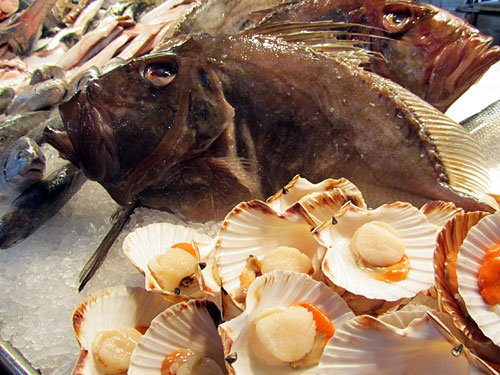 Seafood for sale at the Rialto market in Venice 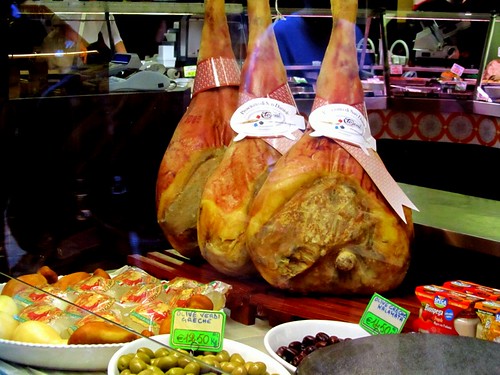 Prosciutto in a typical Ventian store (not at the market)

We bought a couple of slices of pizza and sat outside at a table to eat. Apparently, however, the table belonged to the cafe next door because they told us we couldn’t eat there.

Waiter: Prego? [Note: Prego is a sort of all-purpose Italian word. In many instances, such as here, it means “please”. Other times it means “you’re welcome” — and sometimes other things, as well.]
Kris: No. [As in, we don’t want anything.]
…A few minutes pass…
Owner: Prego?
J.D.: No.
Owner (almost growling): NOT FOR PIZZA!

This was our introduction to the concept of coperto. If you want to sit at a table in Italy — especially in northern Italy — you have to pay for the privilege. You can eat at the counter (or get your food to go) for free, but if you eat at a table, you pay coperto, a cover charge of between €1 and €3 per person.

Embarrassed, we picked up our pizza and left. 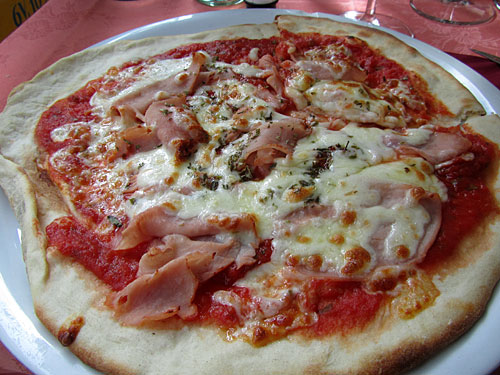 A typical Italian pizza, exactly like the ones they serve at Mi Famiglia

On our walk back to the train station, Kris got a compliment. A woman stopped her and began to ask directions in Italian. Kris smiled and tried to mutter a reply. The woman realized she’d made a mistake, shook her head, and walked on to find a real Italian.

Back in Venice, we took a nap. At 1600, we went downstairs to the breakfast room to meet our Rick Steves tour group, which comprised Sarah (our tour guide) and 25 other tourists. We spent about 90 minutes introducing ourselves and going over ground rules. Then we headed out for a short walking tour of Venice. 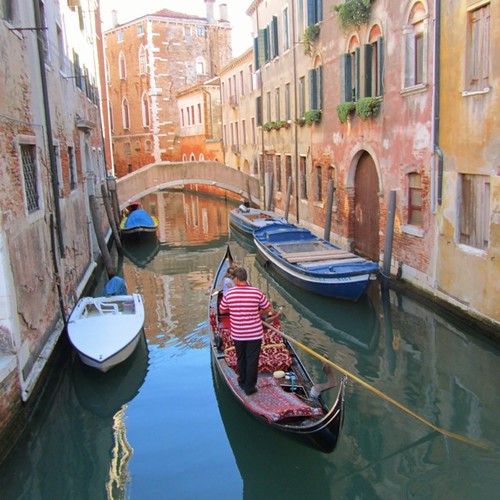 You see this dozens of times a day in Venice (one reason I want to live there!)

The walking tour led us to Anonimo Veneziano — or The Anonymous Venetian — where we got to know other members of the group over a long dinner, which included:

After dinner, some of us took a short stroll to Piazza San Marco (a.k.a. St. Mark’s Square), where we heard orchestras playing and watched other tourists crowding around — just like us!

I apologize for the focus problems — my camera has limitations

We fell asleep to the sounds of noisy chatter in the plaza below the Pensione Guerrato — and the strains of Lynyrd Skynyrd’s “Sweet Home Alabama”.