After another breakfast consisting of yogurt, a hard roll, and orange juice, the Rick Steves group met Elisabetta, a native Venetian and our guide for a tour through the heart of the city.

We headed south from our hotel (Pensione Guerrato), making our way slowly through the crowded streets to the Accademia Bridge (so named because it’s located next to the Accademia art gallery). Along the way, we stopped to tour the Basilica di Santa Maria Gloriosa dei Frari, yet another church. (Sorry to be dismissive. We toured many churches in Venice, and a few more in France. They blur together after awhile. Kris liked this one. Ask her to tell you about it.)

We also stopped at a shop that makes Venetian masks, where Elisabetta told us their history.

Sorry, I didn’t write down the name of this mask shop…

As you can tell from the video, Elisabetta was a kick. Besides having a great sense of humor, she was the best source we found for information on what life is really like in Venice.

Trouble in Venice
Most people believe that the biggest problem Venice faces is flooding. They think the city is sinking. Elisabetta says that actually the city’s current crisis is depopulation. Venice had 250,000 inhabitants in the 18th century and 160,000 people after World War II. But today, Venice has only 60,000 people.

She says the top reasons for this rapid drop in population are the difficulty finding work along with rising expectations. (Or, as we say around Get Rich Slowly, lifestyle inflation.) Plus, everyday costs are greater in Venice. Elisabetta said, “Milk might cost €1.25 here in Venice, but only €0.60 in Mestre [just across the water on the mainland]. It costs more to live here because things cost more to transport.”

Though Elisabetta didn’t mention it, I wonder if the tourist trade also has caused the cost of living to increase. There were a ton of tourists in Venice, even in late September. In fact, it seemed like the city is mostly tourists — like a Disneyland for old, rich white people.

Elisabetta also talked a bit about the wonderful Venetian practice called the ombra. This is like a coffee break, but with a glass of wine. In fact, one morning I watched as a construction worker took a break at 10 a.m. to go into a shop for a glass of white wine (perhaps prosecco, a local sparkling wine). According to Elisabetta, folks who start work early (like garbage collectors, whose days begin at 4 a.m.) might have a glass of wine at 6 a.m. — but she doesn’t recommend it.

Note: I was shocked at how much wine people drank in Italy. I mean, I knew wine was popular, but wow! As I’ll mention when we get to Florence, one day we say three men order two liters of wine — for lunch! Yet another reason I loved Italy…

Back to our tour…
When we reached Piazza San Marco (a.k.a. St. Mark’s Square), the group parted ways. Kris and I scouted out a place near the river for pizza and prosecco. After lunch, we returned to Piazza San Marco to tour the Doge’s Palace, the highlights of which were the very dungeon-like dungeon and the Ponte dei Sospiri (or Bridge of Sighs). 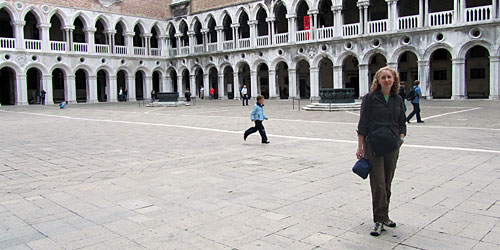 Kris, in the courtyard of the Doge’s Palace 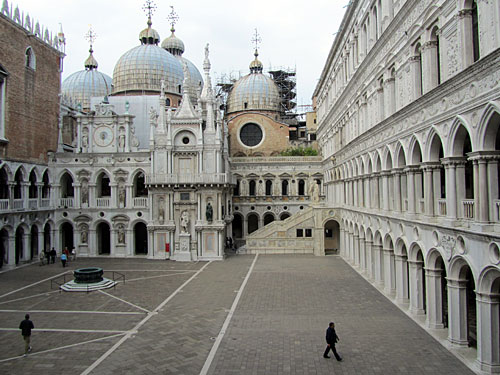 The Doge’s Palace and St. Mark’s Cathedral (under restoration) 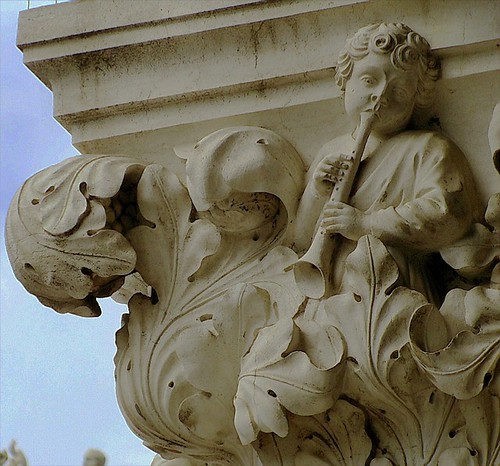 Detail from a cornice of the Doge’s Palace
History lesson:

Italy hasn’t always been a unified country. In fact, for most of its history, the region has been a collection of independent city-states, of which Venice was once one of the most powerful. Because of its isolation (it’s located two miles from the mainland), it was easy to defend. It became a great naval power and an important center of trade.

For over one thousand years, Venice was ruled by The Doge (or Duke), who was elected for life by the city-state’s ruling elite. The Doge’s Palace was built in 1324; it’s nearly 700 years old. Its walls ooze history. In the 16th century, the palace was linked to the prison by the Bridge of Sighs. (The bridge was so named by Lord Byron in the 19th century, and is meant to suggest that the prisoners being led across it are sighing as they pass from Venice into captivity.)

Construction on St. Mark’s Basilica next door began in 1071, but wasn’t completed for over 600 years. (As you can see from the photo above, they’re still working on it.) St. Mark’s is probably the top tourist site in Venice — and yet Kris and I barely saw it. (I’ll mention why tomorrow.) We regret that…but it simply gives us another reason to return.

We met the tour group at 6 p.m. for a “pub crawl”. We went to three different cicchetti bars for wine and snacks. Cicchetti are basically appetizer plates, which I found similar to Spanish tapas. They might be olives or meats or small sandwiches or even just vegetables. It’s good stuff.

At the second cicchetti bar, I chatted with the server about soccer, which goes by the name calcio (or “kick”) in Italy. He gave me advice for seeing a match in Rome on Sunday between Lazio and an out-of-town rival. (Lazio is the region of Italy — like a state, I guess — in which Rome is located.) If the timing was fortuitous, the group might get to Rome in time for me to watch the match.

At 8 p.m., the group took an hour-long gondola ride on the Grand Canal. We were serenaded by a guitarist and vocalist, which I tried to capture on video.

Our night-time gondola ride in Venice

After the gondola ride, Kris and I stopped to buy sweets on the way back to the hotel. (In Venice, Kris developed a taste for meringues.)