At breakfast, we said good-bye to the other members of the Rick Steves tour group that we’d been traveling with for the past ten days and set out on our own. We left our bags at the hotel while we headed out for a day trip — with no guide!

We took the Metro A train to the Termini Station, then made the long walk to transfer to the B train, which took us to the Piramide stop. From there, we took a 30-minute ride on the commuter train to Ostia Antica. (The Rick Steves guidebook says that it’s a sixty-minute trip from downtown Rome to Ostia Antica, but it took us ninety.)

For much of the trip, Kris was tense. After ten days having a guide directing most of our moves, suddenly we were on our own again, having to figure out train schedules and transfers. She didn’t like that we didn’t have definite answers to our questions as we made our way. But you know what? It all worked out just fine! 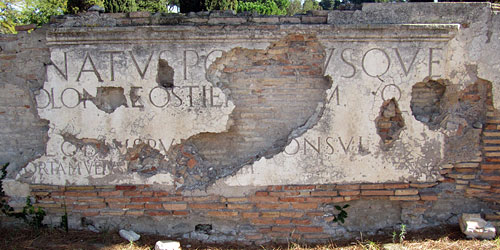 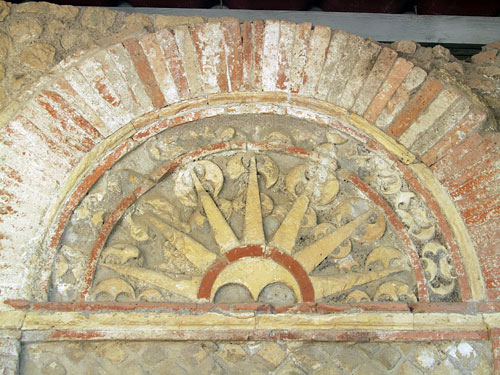 In the graveyard at Ostia Antica 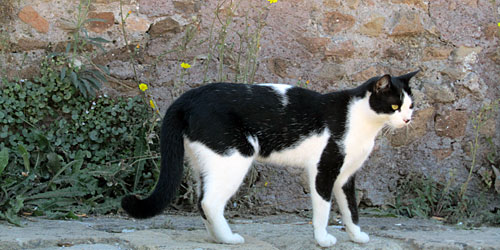 All trip, Kris and I craved cats. This cat at Ostia was very friendly.

Ostia was the harbor city of the ancient Roman empire. (Antica just means “ancient”.) For over a thousand years, Ostia was a thriving city. But in time, it fell into decay. Eventually, they city was abandoned, and slowly covered by sediment from the River Tiber. The ruins have been recovered now, and this little-known site is now considered a better example of an ancient Roman city than Pompeii.

A small portion of Ostia Antica

There were few Americans at Ostia Antica, but there were tons of German tourists in the ruins. (I actually found them more annoying than Americans!) We did meet one woman from Houston, though. She told us she tries to come to Europe once every year, and has been doing so for 25 years. I got the impression she was fairly well-off, but she also talked about how she makes sacrifices in other areas of her life so that she can travel. (This was a common refrain from fellow travelers, by the way.) 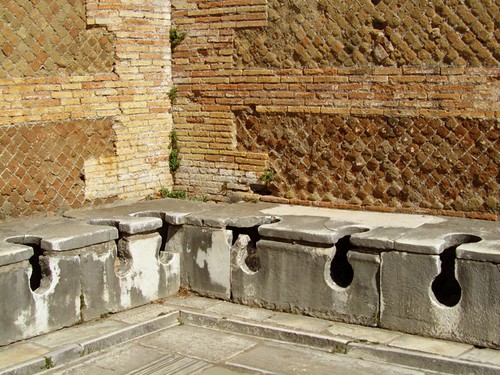 Roman latrine at Ostia Antica. Note the lower hole, which is space for a “sponge on a stick”. 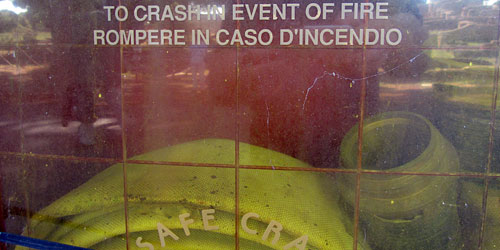 I could do a whole post on the hilarious English we saw in Europe, especially in museums

After touring the ruins, we took the train back to Rome, where we ate a large lunch (cheese plate, steak with salt and rosemary, and a liter of wine), then collected our bags and returned to the Termini Station. There, we spent a few hours on the platform, waiting for our train to Paris. I wandered the station, reveling in the feel of it all.

Our train trip was mostly uneventful — it grew dark soon after we left Rome, which saddened me. I wanted to watch the countryside go by.

This video is for my nephew Noah, who loves trains.

Again, Kris was tense. She was unsettled by the unfamiliar situation, and full of uncertainty. It made her crazy! (“I think they forgot to turn our beds down!” “How will we know where to get off?” Etc.)

During the night, I woke as we passed through Florence, and then again in the early morning as we stopped at the platform in Lausanne, Switzerland. But when I woke for good, we were in France…