Though Kris slept soundly on the train from Rome to Paris, I did not. I woke at 21:00 in Florence, around midnight in another Italian city, at 06:00 in Lausanne, Switzerland, and again permanently at 07:30 on the outskirts of France. None of my sleep was restful. 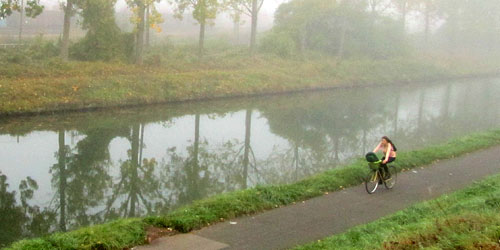 For unknown reasons — though possibly because of strikes, which we had to contend with during our entire stay in France — our train was two hours late arriving in Paris. Today was my turn to be tense. I was tired, hungry, and disoriented, and there were too many people around.

When we left the train station at Gare de Lyon, we quickly found the nearby subway stop, but we were puzzled for a bit by the process for buying tickets. This was made worse by the crowds, our luggage, the lack of a chip-and-PIN credit card — and the drunk man trying to sell us discount metro tickets. (Turns out his tickets were legit and a good deal, but I wasn’t willing to take the risk.)

Map of the Paris train system — the Metro (subway) and RER (commuter line). Click to enlarge.

Without too much hassle, we found our way to the Hotel Muguet near Rue Cler. (Our Metro stop was École Militaire on the 8 train.) Rue Cler is a quiet, traditional Parisian street that’s been popularized by Rick Steves through his television show and guidebooks. It made a good “home base” during our stay in Paris. 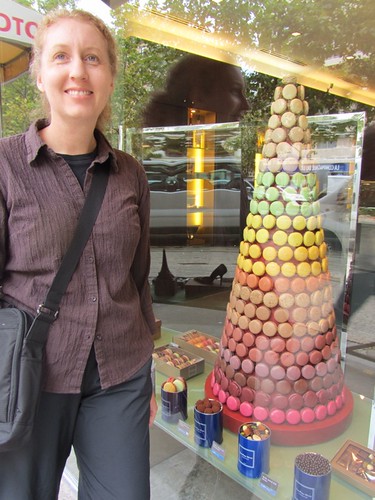 Kris, next to a column of macaroons

We ate lunch at Tribeca, an Italian place on Rue Cler, then dove into France. We bought two-day tickets for the red double-decker hop-on/hop-off tour buses, which we took through the heart of the city. (Well, the heart of the tourist portions, anyhow.) 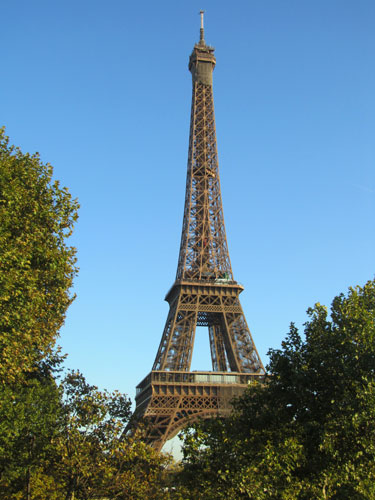 The Eiffel Tower as seen during our bus tour 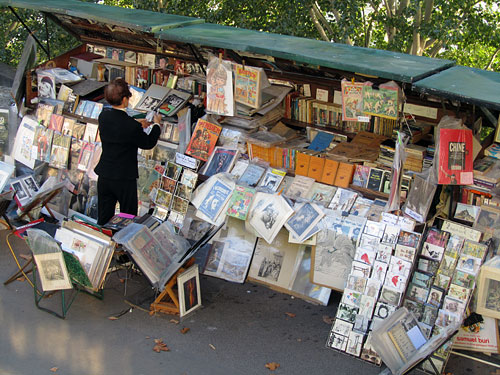 These bookstalls are common on both banks of the Seine, and have been since the 1500s
Note: While many people hate double-decker bus tours, Kris and I love them. Whenever we arrive in a big city, we try to take the bus tour as soon as possible. As I’ve mentioned, one of my superpowers is maps and directions, but in order to use this power, I need some sort of orientation. These bus tours are perfect. I spend an hour or two on a bus, and then I can get around the city with few problems. We’ve done this in London, New York, San Francisco, and Paris, and I plan to do it whenever we have the chance.

After the tour, it was already getting late. We took a brief walk through Rue Cler and the surrounding neighborhood before choosing to eat dinner at a small bistro. We both had the delicious boeuf bourguignon.