Before we could get to Versailles, we had to buy tickets on the RER, the commuter line that runs to the outskirts of the city. This oughtn’t to have been too tough, but we made it so.

Our ticket-buying adventure
First, we tried the self-service ticket machine. No dice. When it came time to pay, my credit card wouldn’t work. Unlike the rest of the world (including France), the U.S. hasn’t adopted the chip and PIN system, so the machine couldn’t accept my card for payment. (You can use U.S. cards at most places in Europe — but not all of them.)

Because our cards wouldn’t work, we tried to scrounge for enough cash to buy the tickets — but the machine only accepted coins. The balance due was €6.20, but we only had €5.20 in change. No problem!

There was a ticket office right next to us, so we went inside to buy tickets from a human being. (Or to get change.) But the ticket office was closed, so we were out of luck. No problem!

Nearby stood one of the ubiquitous Parisian newsstands. Kris went over to get some coins — but the vendor wouldn’t break her bills. In fact, he wouldn’t even let her buy anything to get change for the machine. He refused to sell to us!

Flummoxed, we tromped across the Seine to another newsstand (one standing almost directly above the point in the tunnel where Princess Diana lost her life). I bought a copy of the International Herald Tribune (an abridged English-language international version of the New York Times). Or three. “Troi, monsieur?” asked the puzzled vendor. “Mi dispiace,” I said, substituting Italian for French. Oops.

In any event, we got the €2 coin we needed, which gave us enough to buy tickets for the train. We tromped back across the bridge to find that the ticket office was now open! We conserved our coins (they’re very useful in Paris) and bought tickets with cash from the man in the office — which gave us even more coins in change.

That trauma over, we finally boarded the train to Versailles. For twenty minutes, we sat across from a young man who was hacking and wheezing and looked pale as death. This came back to haunt us in a few days… (Foreshadowing!)

The palace of Versailles
In the village of Versailles, we ate a small lunch before heading to the palace. We bought a fresh, warm baguette at a bakery in town, which we combined with some goat cheese Kris had brought. I also ate my new favorite: pain au raisin (or raisin bread, which I wish I could eat for every breakfast). We dined in a lovely little park, watching the locals and the birds.

After lunch, we toured the palace and gardens of Versailles. For one hundred years, this was the capital of the kingdom of France. It was also a symbol of royal decadence. When the French Revolution came, the palace was seized by the people, before eventually becoming home to Napoleon. Though large (well, enormous is a better word), beautiful, and opulent, the palace seemed somehow hollow, as if it were all glitter and no gold.

Part of the palace’s exterior 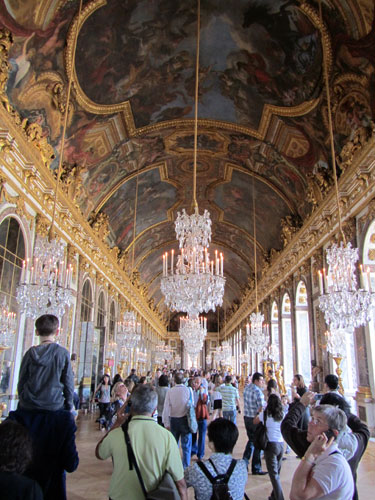 The Hall of Mirrors in the palace of Versailles

The gardens, on the other hand, were spectacular. We spent hours wandering the property. At one point, we ate yet another mediocre French meal. That was forgotten, however, as we resumed our stroll of the grounds. It was impossible to see everything — there are over 800 hectares (2000 acres or three square miles) of gardens. 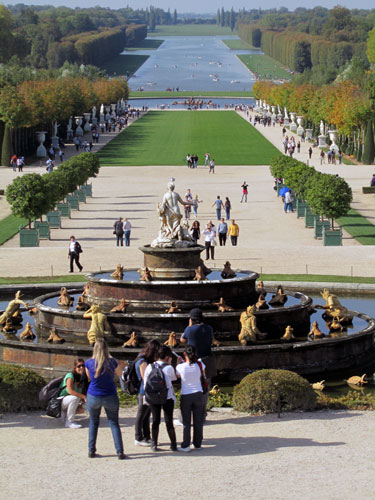 Looking down the park at Versailles toward the Grand Canal 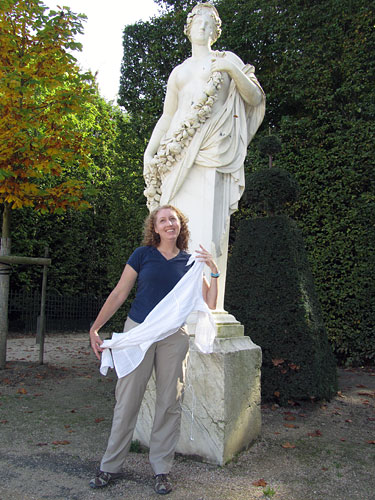 The highlight of the day came when the 300+ fountains put on their show between 1530 and 1730. We had two hours in the warm sun to watch the displays. Often, they were literally like fireworks with water. I did my best to capture them, but neither video nor photos did them justice. And two hours wasn’t enough to see all of the fountains we wanted. 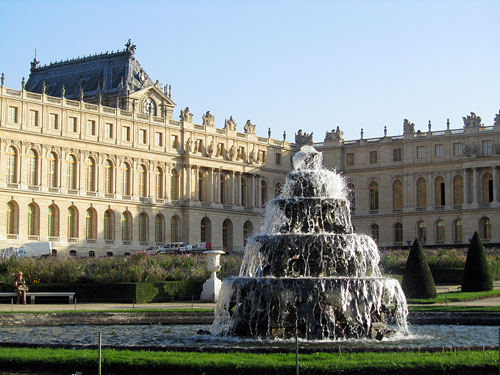 One of over 300 fountains in the gardens at Versailles 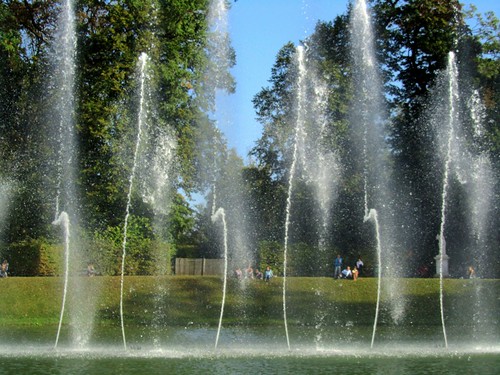 The mirror fountain at Versailles was just like fireworks with water

If you go to Versailles, go when the fountains are on. They’re on for festival days and summer weekends. It’s well worth checking in advance to be sure you get to see the display. I’m not kidding.

Here’s a two-minute video that features highlights from our day at Versailles:

Note: For some unknown reason, Versailles is currently hosting an exhibit by Japanese artist Takashi Murakami. Murakami’s stuff is fine — but it’s not congruent with the art at Versailles. It’s very Japanese, by which I mean almost manga-esque. Manga and classical styling don’t blend well. At all.

Back in Paris, we spent our evening at the laundromat. We had to decipher the instructions, which were oblique even when translated to English. With the help of a young French man (who didn’t speak English but could tell we were lost), we finally figured out how to buy soap and get the machines started.

Note: As many have noted, doing laundry in a foreign country can be a fun experience. In Italy, one of our group accidentally bought a bunch of condoms when she though she was buying soap!

Clean clothes in hand, we packed for the next day’s transfer to our river cruise! 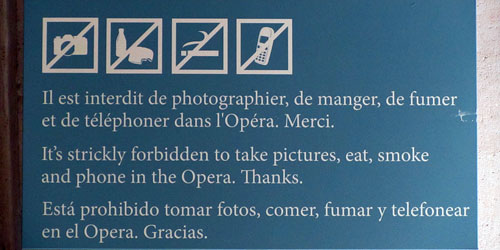 Strickly speaking, this isn’t good English. The laundry video has another funny misspelling.