We slept late because we didn’t have much planned for this Sunday. After breakfast, we packed our bags and boarded the metro to move to the boat for our river cruise. In the process of packing, I discovered I’d lost my wireless keyboard (which I brought for my iPad). I’d used it in Rome, and took it out on the train to Paris — which is probably where I left it.

After dropping our bags at the River Baroness, Kris and I decided to kill some time by wandering around the city. We took an impromptu stroll through the neighborhoods near Parc André Citroën. The streets were quiet on this warm Sunday afternoon in early autumn. We saw an old man biking lazily down the middle of the road, a young boy carrying home two long baguettes, and a gaggle of teenagers giggling about something. But no tourists. 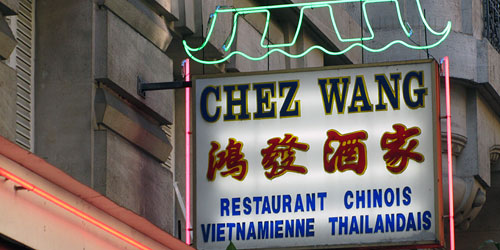 Along Rue Saint-Charles, we stumbled upon a street sale. The neighborhood folks were out in force, selling their Stuff and browsing the crowded sidewalks looking for treasures. It was fun to see a Parisian rummage sale, looking at the things the French wanted to part with with. 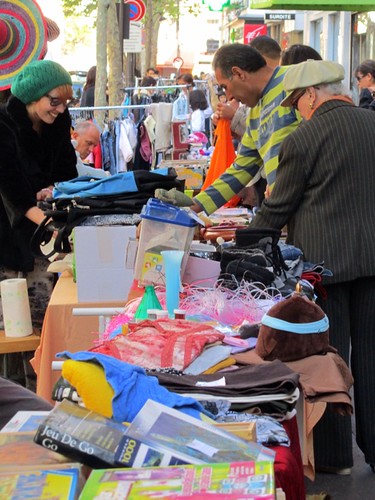 Kris used her mad French skillz to buy a pair of chaussures for €3.

On the way back to the River Baroness, we strolled through Parc André Citroën Park, which is really rather lovely.

The boat set sail at 17:30, heading up the Seine toward Normandy. During dinner, we mingled with the other passengers. Though Kris got on well with people, I felt out of my element. Of the 120 other tourists, we were certainly among the youngest. Most were in their 60s or 70s — even older than those in our Rick Steves tour of Italy.