Overnight, the River Baroness docked in the commune of Les Andelys, about 100km from Paris. In the morning, the passengers came ashore for a short hike to the ruins of Château Gaillard, a medieval castle (built by Richard the Lionheart) that overlooks the River Seine. 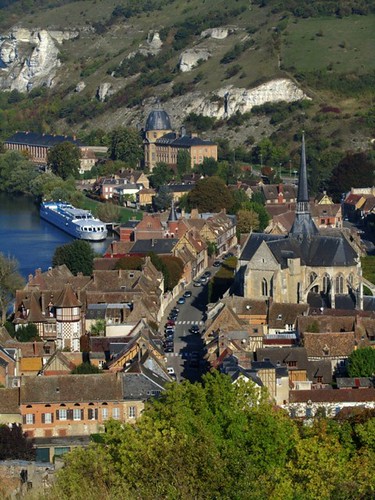 Les Andelys, with our ship on the river

I was mostly unimpressed, although I think Kris found the view stunning. For one thing, I thought our tour guide was from the same dull, humorless school as Luca, our guide in Florence. She was like an encyclopedia, but I wanted something more personal.

Mostly, though, I marveled at the alarming physical condition of our companions. True, we had to climb 300 feet to reach the castle, but our pace for that half-mile walk was very, very slow. It was like taking an easy stroll up a bluff to get a better view of the countryside, but many folks struggled. On the return to town, I heard people complain about how tough the walk was and how after this much exercise, they could eat anything they wanted for the rest of the day.

This was alarming. It was a wake-up call. Though I’ve lost a lot of weight this year and am in good physical condition now, I can’t capitulate. I can’t return to what I was before. I need to stay healthy and active so that in twenty years, I’m not complaining about simple hikes.

Note: This experience inspired a recent Get Rich Slowly post in which I argued that your health is your most important asset.

Back in Les Andelys, Kris and I stopped at a convenience store — or the French equivalent, anyhow — for coffee and cigarettes. While she ordered an espresso, I bought tobacco. (Note for those who don’t know me in Real Life: I don’t smoke regularly. In fact, I smoke hardly at all. But I do like to have fun cigars and cigarettes around for the 5-6 times a year I do smoke.)

And here we had a little cultural communication breakdown. Because we were speaking English and the shop owners were speaking French, and because Kris was doing one thing and I was doing another, she thought I’d paid for her coffee when I bought my cigarettes. I hadn’t. So, as we were walking away from the store, the owner had to run outside and holler at us to come back and pay. (I’m sure that he and his other patrons were thinking, “Stupid Americans!”) It was embarrassing — but not much. Mostly, it’s a funny story to tell our friends.

Back on board, we ate lunch as the River Baroness set sail. In the afternoon, we sat on the deck, soaking in the sun and watching the beautiful French countryside float by. I smoked one of my new cigarettes. (The rest will probably last me a couple of years!) 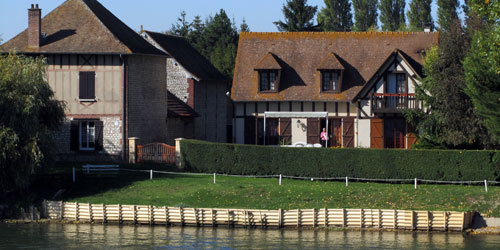 A typical French home along the Siene.

In the evening, we ate dinner with Richard and Deana Sansing. Richard is an accounting professor at Dartmouth. He seemed unimpressed with both Custom Box Service and Get Rich Slowly! I, in turn, thought a some of his ideas were academic and theoretical and not really applicable to the Real World.

After dinner, we attended a fine violin concert: