After just a couple of days, the boat was driving me crazy. I’d felt cooped up in Italy, but that sense of confinement was nothing compared to the river cruise. At least in Italy, we were walking most places, and if I needed to escape to be on my own, I could. That wasn’t true on the River Baroness. I was trapped on a ship full of old people.

So, on our second morning in Rouen, I rose early to join a small group for Nordic walking:

Our small group walked for about 2km, stopped to do calisthenics, and then walked 2km back to the boat. As we walked, we chatted. I got to know Mark, from Vancouver, B.C., and Roger, who is 65 but looks 45. By the end of the cruise, Roger had become a sort of role model for what I want my fitness level to be like in 25 years!

After breakfast, we took a walking tour of Rouen, a city the size of Salem, Oregon. The tour was short and slow to cater to the old folks. We saw the medieval downtown area, the shopping district, and the place where Joan of Arc is supposed to have been burned at the stake. 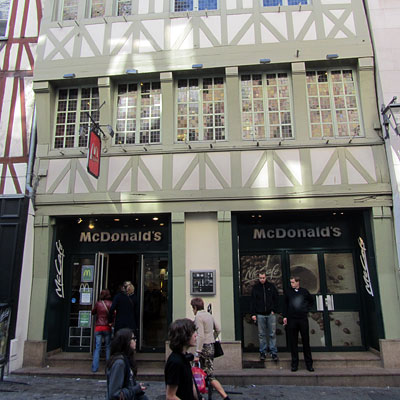 Kris loved this McDonald’s, which is housed in a centuries-old building

Later, Kris and I did some shopping on our own. Kris bought a (men’s) scarf, and I hunted — unsuccessfully — for Peanuts in French. Apparently Charlie Brown and Snoopy are a hit in Rome, but not in Paris. We spent a lot of time in a French supermarket, marveling at all the stuff that’s different from home. (We do this in every country we visit, by the way.) I was particularly impressed that you could buy fine Scotch whisky from a grocery store.

We spent the rest of the afternoon resting on the boat. In the evening, we watched The Da Vinci Code, so now I can finally say I know the story.