We woke a bit early to catch our bus from Florence to Rome. The bus climbed out of Florence into Umbria, the region south of Tuscany (which contains Florence) and north of Lazio (which contains Rome). I was eager to reach Rome because I wanted to attend a calcio (soccer) match at 15:00 between Lazio and Brescia at the Olympic Stadium. Alas, this was not to be.

Instead, we exited the autostrade (freeway) near Orvieto and climbed the hills into the Umbrian countryside. After half an hour of twisting and turning, we reached Poggio della Volara, an agriturismo set on a grape and olive orchard. An agriturismo is a farm that, with a subsidy from the Italian government, has converted part of its operations into what we might call a bed and breakfast. This program gives tourists a relaxed, slow-paced place to escape, while also providing a way for farms to stay in business.

Poggio della Volara is owned by Marco, who took some time to tell us about his farm:

Marco, describing how his farm became an agriturismo

The day was lovely. It was hazy and warm, with just a tinge of autumn in the air. Marco served us four wines produced by local vineyards, as well as a light lunch of bread, cheese, and meat. It was lovely, and well worth missing a calcio match. 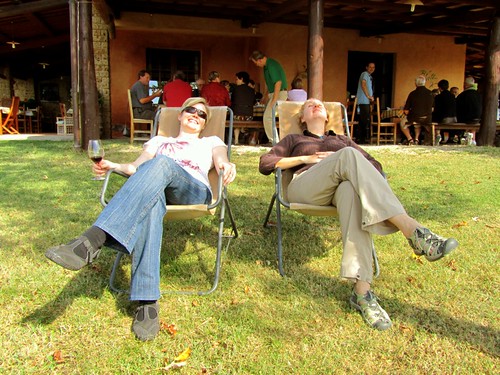 Though most of us would have rather stayed with Marco, the bus continued on. We reached Rome at 15:30, spent 90 minutes getting settled, then grouped for an evening stroll. We boarded the subway at the Repubblica stop (near our hotel) and ventured to the Spagna stop nar the Spanish Steps. 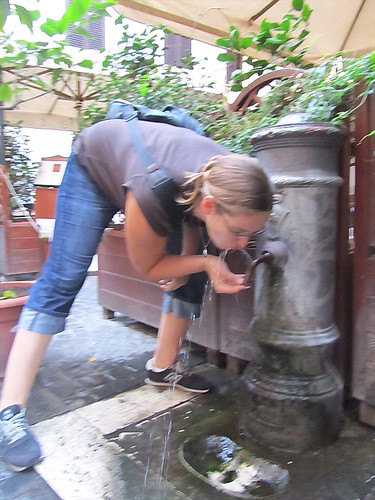 Sarah (our tour guide), demonstrating how the Roman fountains work

Sarah then led us to the Trevi Fountain and the Pantheon.

Wes, who always has his camera ready, trying to get a shot of the Trevi Fountain

Because it was Sunday, the Pantheon was closed. Our tour guide, Sarah, spent some time describing the construction of this amazing building. The ancient Romans built the Pantheon as a shrine to all of their gods. The current building was re-built by the Emperor Hadrian in about 126 A.D., and was eventually taken over by the Catholic Church, which ousted the Roman gods for the god of Christianity. The building is a near sphere (except that it doesn’t extend below the ground), and includes an occulus (or hole) in the ceiling that looks out to the sky.

Finally, we walked to our restaurant, the name of which escapes me. The food was good, but not great. That’s okay, though, because we enjoyed our dinner conversation. We sat with Joy and Phil again, but also with Cindy and Deno, who happen to live just a few miles from us here in Portland. (They live in Wilsonville.) Cindy and Deno both recently lost a lot of weight, and both have backgrounds in public education. They were interesting to talk with.

After dinner, we crossed the Tiber River to see the Castel Sant’Angelo. Most of the group then caught a bus back to the hotel. I wanted to walk &mash I needed to stretch my legs. Plus, the weather was perfect, and I thought this would be a fun way to see the city.

Sarah seemed a little taken aback and initially tried to talk me out of it. “Do you know how far it is?” she asked. “It’ll take you two hours!” She warned me that Rome is huge and the streets confusing. She said I might get lost. But I was confident in my map, my sense of direction (it’s one of my super powers, remember?), and my sense of scale. I knew I could find my way back, and that I might even beat the bus if I hustled. The walk was lovely and liberating. And it only took 35 minutes. I arrived at the hotel just a few minutes after the rest of the group. 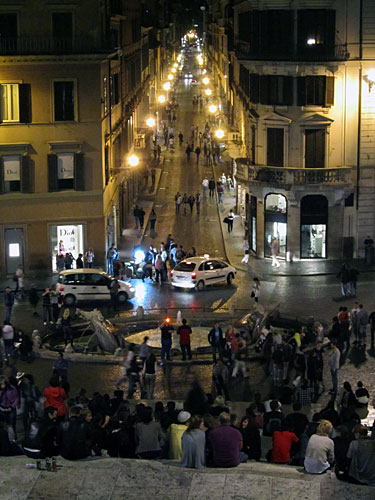 Looking down from the Spanish Steps at night

That night walk through Rome was one of the highlights of my trip. (Other highlights: the morning run in Venice, my solo walk through Paris, and the church of San Clemente, which I’ll talk about tomorrow.)