After a standard breakfast, our tour group caught the Metro, riding from the Repubblica station (near our hotel) to the Cavour station. Some folks — including me — were a little on edge because the U.S. State Department had issued a travel alert warning of possible terrorist attacks on mass transit in major European cities. It was big news this morning. But, fortunately, nothing happened.

At the Cavour stop, we met Francesca, our local tour guide (and something of a celebrity to Rick Steves die-hards). Francesca’s English was outstanding (her father was Italian, but her mother American), and she didn’t drone on and on like our local guide in Florence. She was sharp and witty, and had a real depth of knowledge and passion for her subject: ancient Rome.

First, Francesca took us to the Basilica di San Clemente. The current church of San Clemente is interesting by itself in that the frescoes on its walls depict the (mythical) life and death of Pope Saint Clement I.

During the reign of Emperor Trajan, Clement was banished to Crimea, where he was forced to work in the mines. There, his missionary work among the soldiers and other prisoners was so successful that the Romans got ticked off. They tied him to an anchor and threw him into the Black Sea.

Later, the Black Sea receded around the spot where Clement had been drowned, revealing a tomb built by angels. Inside lay Clement’s body, which was recovered and buried on an island.

Every year after that, the Black Sea receded again, revealing the angelic tour. On one of these annual ebbs, a child was trapped by the returning tide and swept away. He was recovered safely the following year, however, when the waters parted and revealed the magical angelic tomb.

What was really exciting about San Clemente, however, was that the current building is constructed atop not one, but two previous iterations of the same church. You can see all three levels, descending into the damp and dark, almost literally stepping back in time. It’s awesome to find yourself on actual streets of ancient Rome, forty feet below the surface. This was a highlight of our trip.

We took a quick break after viewing San Clemente, during which some of us bought produce from a local vendor. My mid-morning snack? A gigantic carrot — and a Coca-Cola Light. (Coke Light is the European equivalent of Diet Coke.)

Next, we got a whirlwind tour of the Colosseum, which Francesca says is not what the ancient Romans called it. (She says they simply called it the Amphitheater.) Our tour of this colossal structure seemed too brief. The scale of the thing was amazing, and I wanted to linger longer. 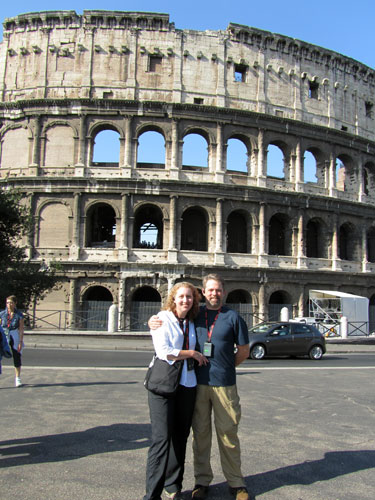 Kris and J.D., in front of the Colosseum (photo by Phil) 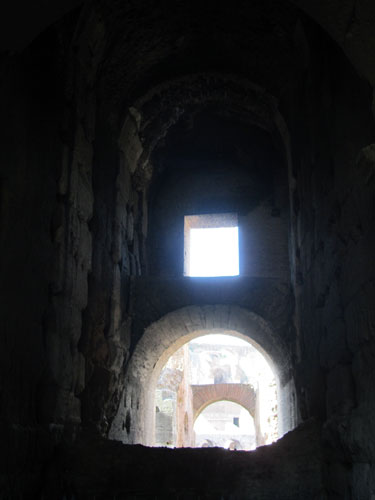 I liked looking down the tunnels into the Colosseum
A panorama of the Colosseum — our tour guide, Francesca, can be seen at the end

We finished our tour of ancient Rome by strolling through the Roman Forum, the former city center. After Francesca left us, Kris and I climbed the Palatine Hill and walked among the ruins. 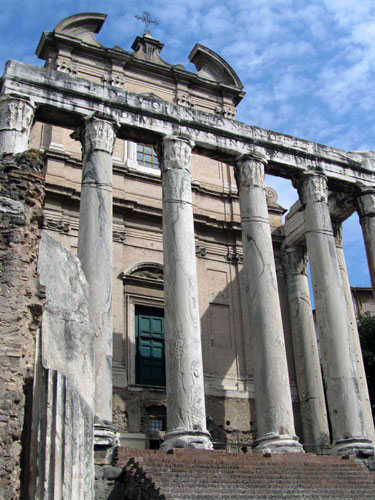 It was already mid-afternoon, and the sky — which had been spitting at us all morning — threatened to open wide at any moment, so we dodged our way through Roman traffic toward the Pantheon. We stopped first, however, for a l-o-n-g and delicious lunch (during which we shared a liter of wine — which I mostly drank myself). Our meal was served by a young waiter who spoke seven languages. (His goal is to become a tour guide.)

Note: We found that many Italians spoke good English, and that most spoke at least a little. This was fortunate because our Italian was terrible. By the end of our ten days in Italy, however, we could actually fumble our way through most situations pretty well. Italian is a pretty intuitive language, or at least the root words are. If, like me, you’ve dabbled in Spanish, French, and Latin, then Italian is filled with cognates, which makes reading, at least, fairly easy. Because of this, I think Italy is a great choice for people just starting to travel, or who are traveling with children.

We finished lunch at 16:00, then walked to the nearby Pantheon. The Pantheon was once a temple to the gods of ancient Rome, but as with many things in Italy, it was taken over by the Catholic church. I found it vastly disappointing. Though the concept is cool — a dome-shaped building built 2000 years ago to enshrine the gods of the day — its current form as a Catholic church is not nearly as awe-inspiring as I imagine the original must have been. Still, the inside is beautiful:

The inside of the Pantheon, including the occulus (the hole in the roof)

Kris and I spent the evening in our room. Though neither of us was really hungry, I picked up McDonald’s just for kicks. It was a mistake. The food is just as awful in Rome as it is back home.

The big event of the evening, though, was that Kevin Kelly (co-founder of Wired magazine and uber-geek) published a glowing review of my book, a review that was cross-posted to mega-blog Boing Boing. As a result, Your Money: The Missing Manual briefly vaulted into the Amazon top 100 list! Very, very exciting for me.