Hola, todos! For the past week, I’ve been traveling in southern Peru and northern Bolivia. While not quite as intense as the first part of my trip (about which, more details will follow as time allows), it’s still been a hell of a lot of fun.

Yesterday morning was our final leg of trekking in Bolivia, a gentle 90-minute walk to the mountain town of Botijlaca, the entire economy of which is based around the hydroelectric plant (one of many that dot the valleys of Bolivia). Botijlaca has a fun mascot: a smiley face with a light bulb for a nose. 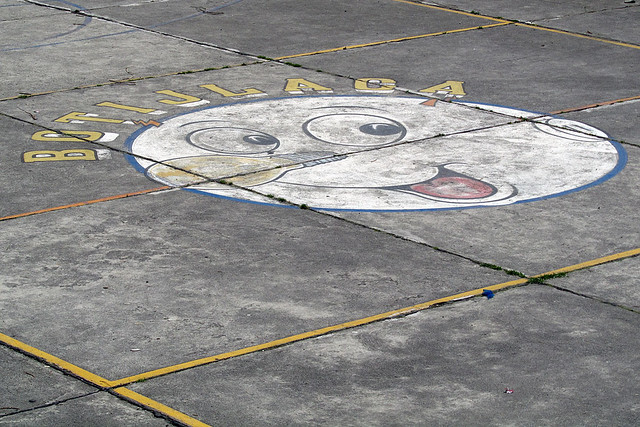 The basketball/football pitch in Botijlaca

We stopped briefly in Botijlaca for a mid-morning snack: salteña, a traditional Bolivian food eaten between 8am and 11am. Salteñas are pastries filled with meat and vegetables and maybe a little bit of gravy. They’re delicious. 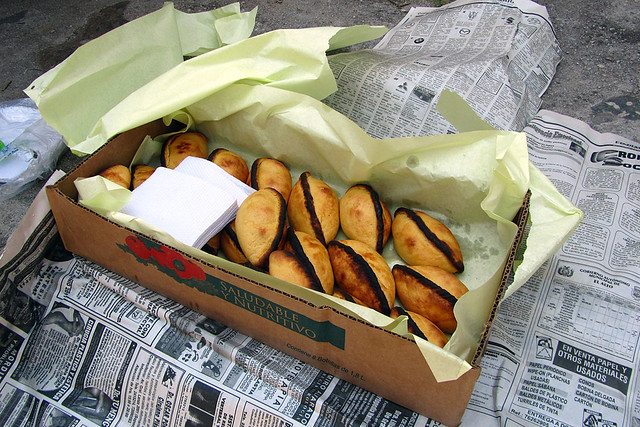 As we were eating our end-of-trek treats, a shy boy peeked from the edge of a nearby building. Our local guide, Freddy, called the boy over and gave him a salteña. He ran off. Before long, he returned with a couple dozen of his closest friends. We happily handed out fruit and candy and other food, which the kids shyly accepted. 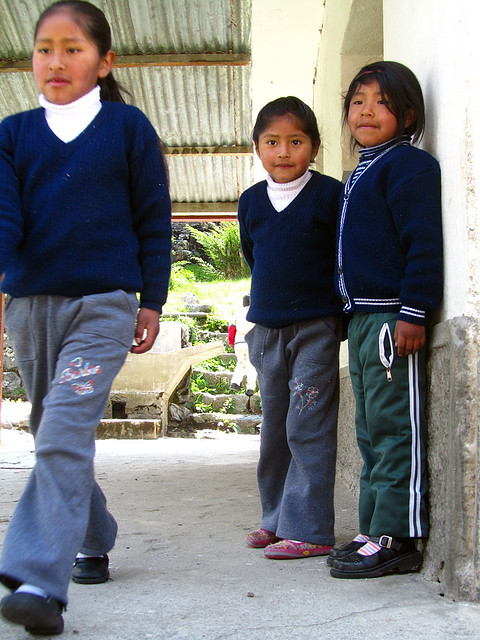 Our bellies filled, we piled in the minivan for the three-hour drive to La Paz, the capital of Bolivia. Though this wasn’t the worst ride of our holiday (that honor goes to the journey from Copacabana, Bolivia to the start of our Condoriri trek), this ride wasn’t without adventure. 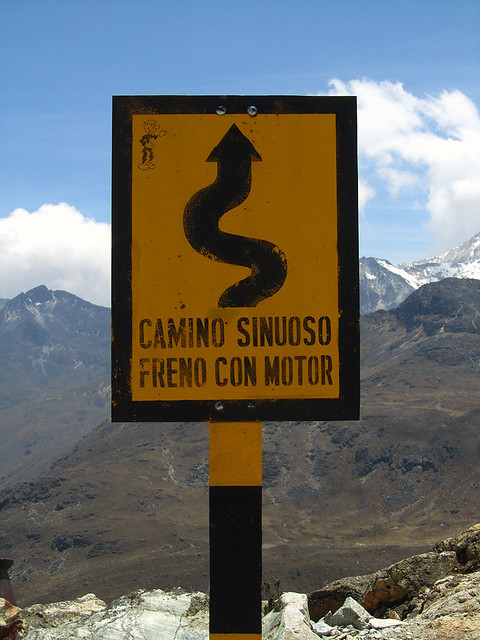 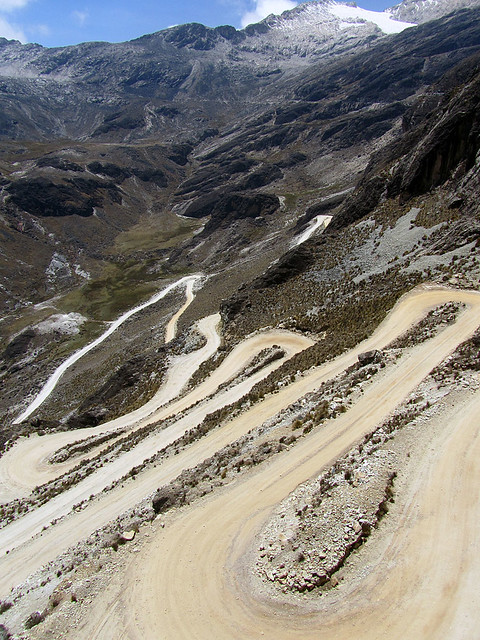 This time, however, we were prepared. Everyone took motion-sickness pills (thanks, Anita!). Besides, the riotous ride wasn’t without its rewards, such as these views of Huayana Potosi: 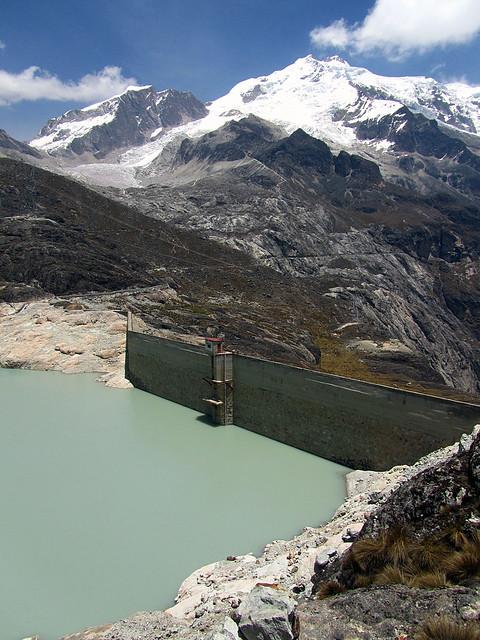 Huayana Potosi and dam (this photo was taken near the refugio) 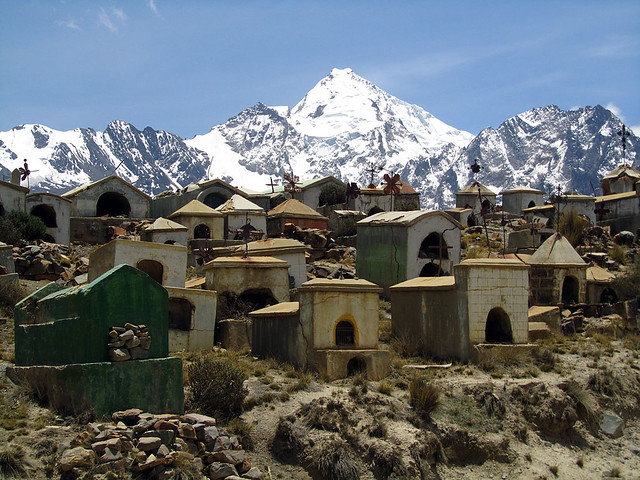 A tin miners’ graveyard outside La Paz, with Huayana Potosi in the background.

After arriving in La Paz, we took much-needed showers. Then, in true adventurer fashion, we gathered in the hotel bar to drink the local beer (Paceña, which isn’t as good as Peru’s Cusqueña) and swap photos. We also compared travel journals: 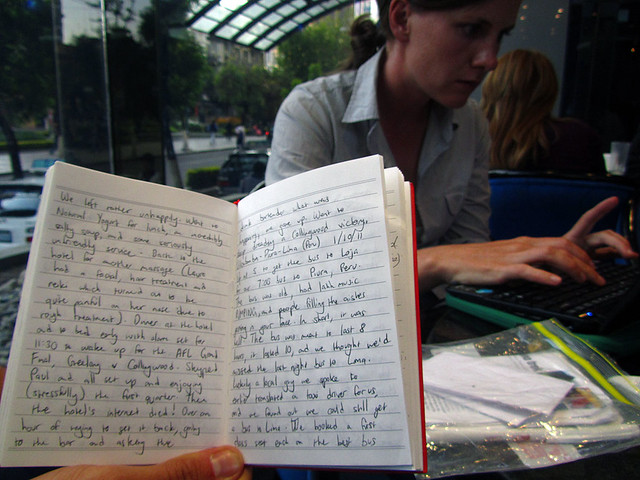 Laura’s travel journal (with Laura sorting photos in the background).

We went to bed relatively early — it’s tough to break the habit of being in the tent at 20:30 and waking at 06:00! — and woke early too. This morning, Freddy took us on a three-hour walking tour of his home town. He took us past the San Pedro prison, where the scent of onions filled the air. Then he led us up to El Mercado Rodriguez, where old women sat in their stalls eating pan (at 0.40 bolivianos per roll, or about a nickel a piece) and sipping coca-leaf tea.

Note: I love coca. It’s used as a flavoring everywhere in Peru and Bolivia. You can have coca tea, coca candy, coca drinks, coca everything. Many people chew (or suck) on the leaves during the day, especially the morning. I’ve actually picked up the habit myself. But I’d better get my fill while I can. I’ve been told I can’t take anything coca back to the U.S., which is a shame. There’s a big difference between coca and its derivative, cocaine. 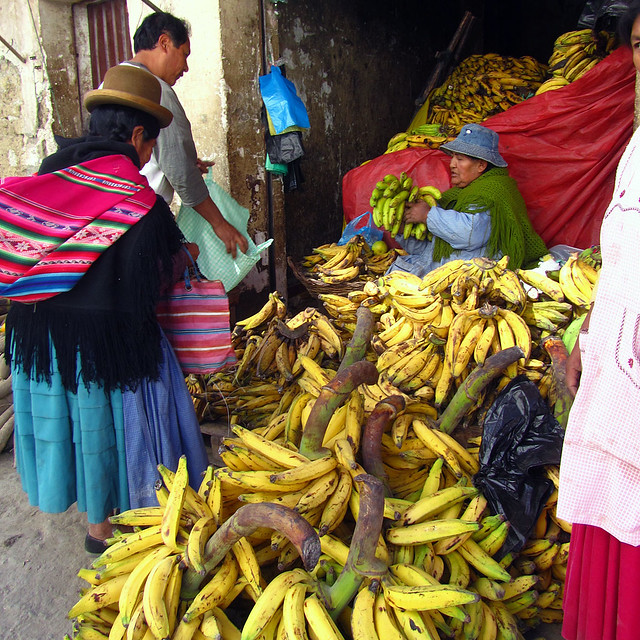 A woman selling plátanos (bananas). You can’t see it, but she has bread and coca tea by her side. 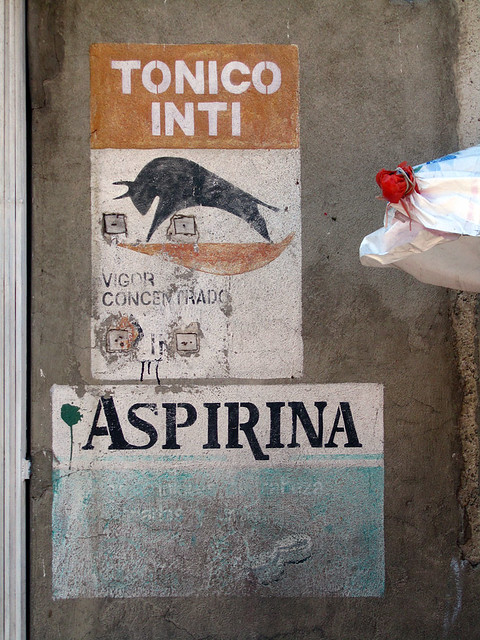 Signs painted on the wall outside a pharmacy in La Paz

Next, Freddy showed us el mercado de las brujas, the witches’ market. (Or, more aptly, the tourists’ market.) As we were walking up the street, we met a group of grade-school kids who were out greeting foreigners as part of a “tourist appreciation” program. It seems a little absurd, but it was fun to hear them chant, “Welcome to La Paz, bienvenido a La Paz.” Their teacher asked me to pose for a photo with the class. I had him take one with my camera too. 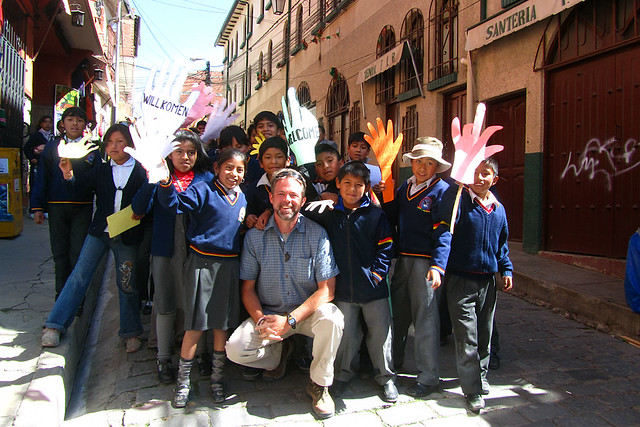 These kids gave drawings to some of our group. I got a photo instead.

Eventually, we made our way to Plaza Murillo, which was filled with pigeons and protestors. The pigeons flocked to whomever was the most likely food source, which was often children. Anita, one of my fellow travelers, is frightened of pigeons (though she’s fine with other birds), and had to be led through the swarm. 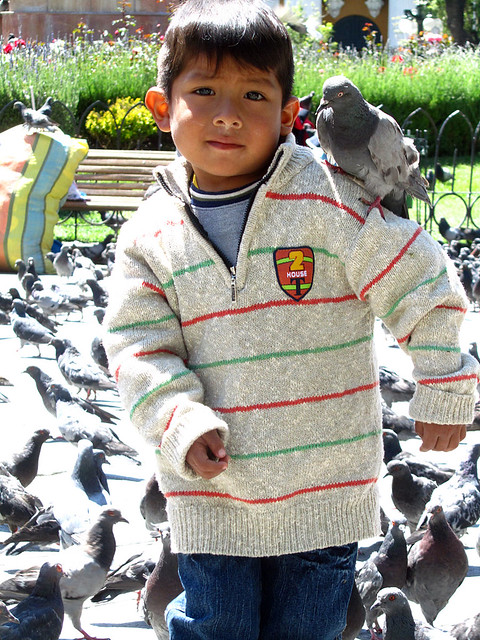 I couldn’t tell if this boy liked the birds or not, but he liked having his photo taken.

The protestors were disbanding after days of occupying the plaza. Television and radio crews were interviewing them about the successful outcome of their complaints. (The President of Bolivia, who campaigned on a pro-indigenous peoples platform, had managed to piss them off because he’d pushed through a trans-Amazonian highway. Apparently he backed down recently, and the highway won’t be completed.) 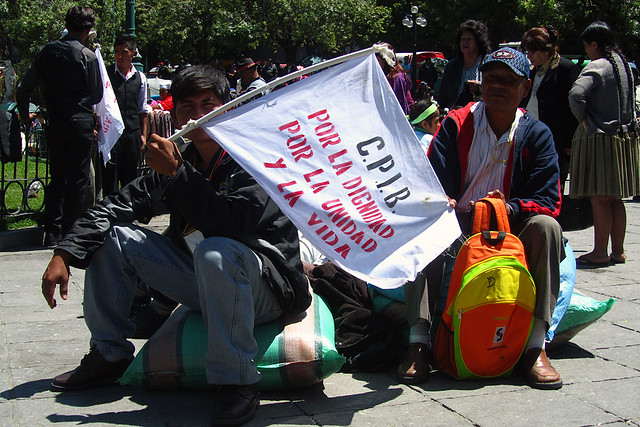 The protestor’s flag reads: “For dignity, for unity, and life.”

After parting ways with Freddy, Stephen and I wandered around on our own. He picked up some gifts for his son. I let a barber talk me into a shave and a haircut. We carried on an awkward but amiable conversation in Spanish. He wanted to talk about the news, but my vocabulary just wasn’t up to it. Besides, I’ve been in total media isolation for nearly a month. I have no idea what’s going on in the world. 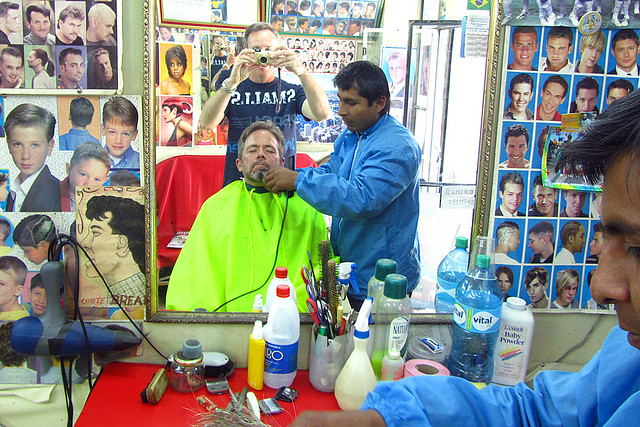 A shave and a haircut in La Paz, Bolivia — photo by Steve

After my 50 boliviano ($7.50 US) grooming, Steve and I headed back to el mercado de las brujas. We stopped in a shop so that he could buy several charms. While he looked around, I struck up a conversation with the proprietress. She was pleased that I spoke Spanish — or tried to. She asked us where we were from, what we were doing in La Paz, and where we were going. She asked about the magazine I was carrying around (Zumate): where I bought it and how much I paid. She even borrowed it for a few minutes, flipping through the pages while Steve finished his shopping.

We said good-bye — and the woman wished us safe travels — and returned to the hotel. “You know,” I said, as we neared our destination. “I like La Paz. I almost think I could live here.” I know it’s silly to judge a city after only 24 hours (and after only seeing a few square blocks), but I like the size and scope of this town. It almost feels like home. 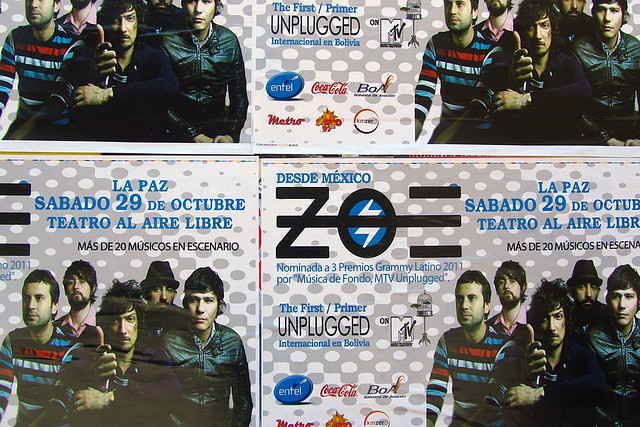 Concert posters for Zoe, one of my favorite Mexican bands. I love their song “Soñe“.
Simple Pleasures

Helado (ice cream) is very popular in La Paz. After lunch today, some of us waited in line (under the blazing sun) at Bits & Cream, which offers two-for-one specials on Tuesday. For 18 bolivianos (just under $3 US), we were able to buy two gigantic ice cream sundaes.

We ate our helados in the hotel lobby. But after weeks of small portions, I couldn’t possibly finish mine. It was huge. I offered it to Steve. “You sure, mate?” he asked.

“I could eat ice cream all day,” he said, digging into my sundae. “If there were some sort of contest for ice cream eating, I’d win it. What sort of food could you eat all day, J.D.?”

“Bacon,” I said. “Definitely bacon.” I was thinking of the amazing bacon I’d had with my llama steak last night — the best bacon I’ve ever had. Salty and smokey and delicious.

“I could eat ice cream all day, too,” Anita said. “But I’m lactose intolerant.” Stating this aloud seemed to make her think twice about the giant sundae she was working on. She passed it along to Steve too, who happily accepted.

“What about you, Grace?” Steve asked. “What food could you eat all day?”

“Corn,” Grace said without a moment of hesitation. “Seriously,” she said after I laughed at her. “I could eat corn all day. You just boil it up and yum!” And here she made a motion like eating corn-on-the-cob in the classic typewriter style.