It’s mid-September as I write this, and I’ve been spending the past few days scrambling to prepare for my trip to Peru. I’ve been packing, of course, but I’ve also been editing reader stories and writing blog posts for my absence. While bustling around, I stumbled across an old document. I’ve shared this before, but it’s been a while. Since it’s an important part of my financial history, I’m going to share it again today.

In the beginning
As most of you know, I struggled with debt for more than a decade. When I graduated from college in 1991, I had the start of a credit card problem. By the time my father died in the summer of 1995, I’d managed to accumulate over $20,000 in credit card debt, most of which came from spending on computers and comic books and other frivolous things.

In 1998, I transferred my credit card debt to a home equity loan. I destroyed the cards and closed the accounts. This was a smart move in one respect (because it helped me kick the credit card habit), but it didn’t prevent me from finding other ways to take on debt; I took out personal loans, and I borrowed from family members. By the summer of 2004, I had accumulated over $35,000 in consumer debt. And when we bought a hundred-year-old house, I finally felt stretch past the point of bursting.

It was at this time that I decided to get serious about money. Instead of paying lip service to getting out of debt, I started to read about how to really do it. Friends loaned me books; I read them. Slowly, I put the ideas from these books into practice.

The debt snowball
One of the first books I read was Dave Ramsey’s Total Money Makeover. In this book, Ramsey advocates a different approach to debt repayment. While most experts recommend repaying debt from highest interest rate to lowest interest rate (because, of course, this minimizes the total amount of interest paid), Ramsey ignores interest rates completely.

“Forget math,” Ramsey seems to say. “If you were a math whiz, you wouldn’t be in debt in the first place. Math isn’t the problem. Psychology is the problem.” He recommends starting with the smallest balance first and working up from there. He calls this method the debt snowball.

I took this advice to heart. Mostly. Based on the debt snowball, I sat down and drafted a plan for paying off my debt. Here’s what it looked like: 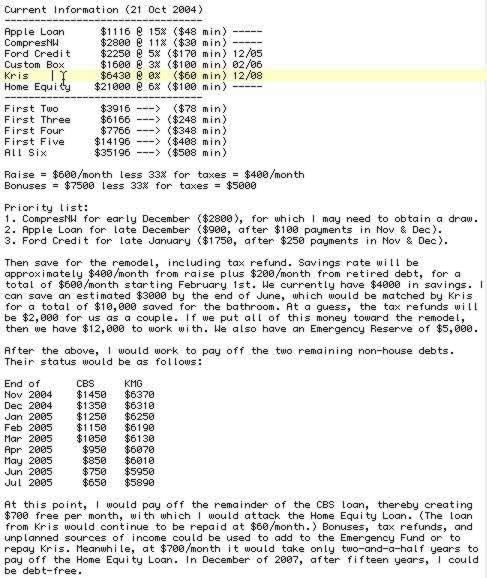 As you can see, I didn’t follow a strict debt snowball. Instead, I tweaked the order of repayment to consider interest rates a little bit. (I put off the 3% loan from the box factory and prioritized business-related debt.) Adam Baker at Man vs. Debt would call this method a debt tsunami. I don’t care what it’s called. All I know is it worked.

Finding financial stability
After drafting this spending plan, I continued to read personal finance books. I subscribed to personal finance magazines. And I started sharing my progress on this blog. There were ups and downs — no doubt! — but from the point I drafted this, I made progress.

In fact, I consider this one text document to be the key to my entire financial turnaround. Its forecast proved surprisingly accurate. “In December of 2007,” I wrote, “after fifteen years of debt, I could be debt-free.” And I was. On 02 December 2007, I said good-bye to nearly 20 years of debt. It felt amazing.

So, today is a sort of personal holiday. It’s a time to remember where I used to be, and to be grateful for how far I’ve come. In a way, it’s fitting that I’m far from home now. (If all has gone well, I’m on Lake Titicaca at the border of Bolivia and Peru. If all has gone very well, there are updates on my trip at Far Away Places.) My travel is physical manifestation of the financial journey I’ve made. And it makes me happy.

It’s my hope that you, too, have made (or will make) a similar journey.

Can you point to a similar turning point in your own financial life? Was there a time you hit rock bottom? Did you create a written plan? What did it take to make you become fiscally responsible? (Or were you born that way?)