One Day in Peru

Hola, todos! After more than a week of roughing it, I’m back in Cusco, where I have my own computer and a reliable internet connection. Tomorrow I head back out on the road — this time for Lake Titicaca and trekking in Bolivia. Eventually, I’ll share details of our trek around Salcantay in the Peruvian Andes. For now, I’m going to share my adventures yesterday in Aguas Calientes (near the base of Machu Picchu).

Yesterday may have been the best day of the trip so far, but it didn’t get off to a good start. I woke to a second day of diarrhea, which prompted me to start on the Cipro. (I only have six pills, so I’d been holding it in reserve for an emergency. I decided this qualified.) I’ve been lucky so far. Nearly everyone else in my group has suffered diarrhea or vomiting or altitude sickness of some sort. My problems waited until we’d returned to the land of indoor plumbing.

Note: I know this probably grosses some of you out, but getting sick is a part of traveling. It happens. And because it happens, it’ll be a part of this blog. (Just not very often, I hope.)

Our group of fourteen rose early to catch the bus to the top of Machu Picchu, the ancient Incan city set high on a mountaintop. We were treated to a dry three-hour tour of the ruins. (A guide with personality can make such a difference!)

Machu Picchu is beautiful, but to be honest, I think most of us found it to be a little anti-climatic after a week of trekking through the Peruvian Andes. The natural beauty we’ve seen has left us numb to man-made wonders. Still, there’s no mistaking the wonder and immensity of these ruins. 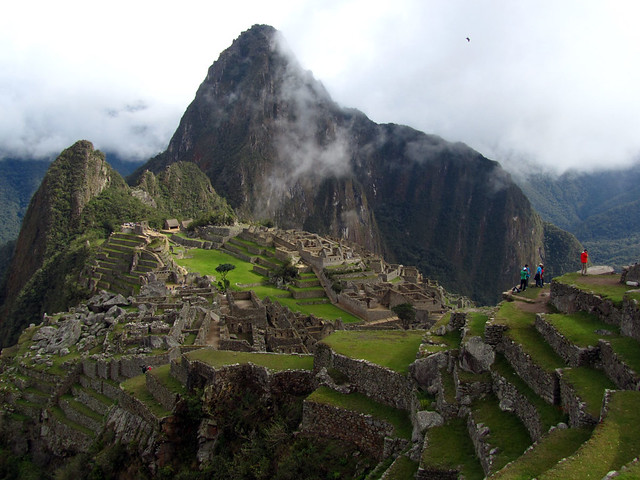 Machu Picchu — or a part of it

After a quick snack, I decided to walk down the roughly 500-meter mountain instead of taking the bus back to Aguas Calientes. The pathway is steep (and hurt my aging knees), but the entire trip only took 55 minutes (as opposed to 20 minutes by bus).

Back in town, I sat on a bench in the main plaza, watching the world go by. After a few minutes, the fellow sitting next to me struck up a conversation. He introduced himself as Carl, a traveler from Antwerp, Belgium. Carl has been traveling on-and-off for the past five years, and continually since May of this year. For ninety minutes, he and I talked about walking (he’s walked all over Europe!), traveling, journaling, relationships, and more.

At one point during our conversation, we were approached by three children: Sanaís (?), Alis (or Alex), and Dulcea. They wandered over to our bench and started talking to us, taking our woeful Spanish in stride. Because each of them were just two or three years old, we got along just fine. 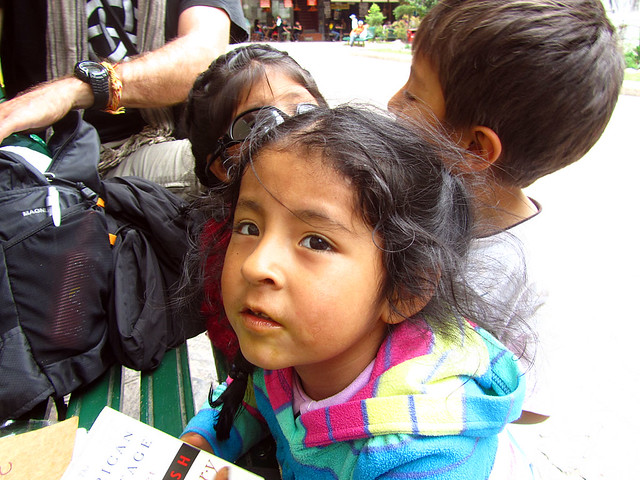 In this photo: My travel journal and Spanish dictionary, Carl’s arm, the kids (with Sanaís wearing my sunglasses upside-down), and the main plaza in Aguas Calientes

The kids climbed on the bench and looked through our stuff. “Bebida!” they told Carl, demanding to drink from his water bottle. When they grew tired of us, they ran back through the pigeons in the plaza to their parents, who were watching from the steps of the nearby church.

After chatting with Carl, I met my group for lunch at El Manu. I had a limonade (made with limes in Latin America, of course) and the causa limeña, which is mashed potatoes stuffed with tuna fish. It was quite tasty. (The potato originated in Peru, and the Andes produces thousands of varieties, though globalization is killing this diversity. Stop buying Yukon Golds, people!) 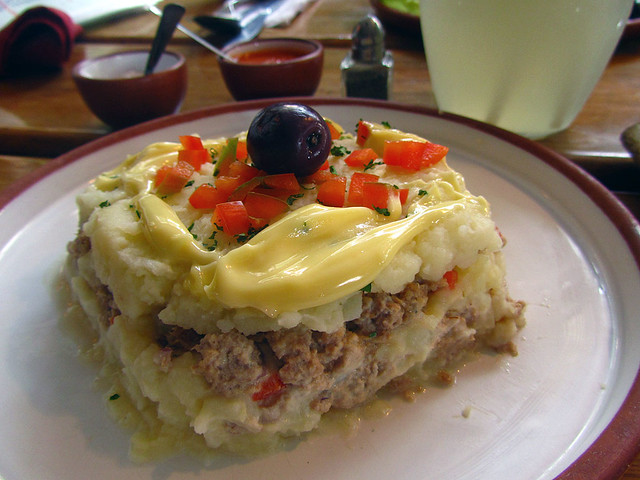 My lunch, the causa limeña

As we ate, the restaurant’s TV played a concert from the group Alborada, which hails from Cusco. They blend traditional Andinan musical forms with modern instruments. They sing in both Spanish and Quechua (the latter being the language — or family of languages — spoken by nearly ten million people in Peru. I only know a handful of words, including “michi”, or cat.) I loved the music. Here’s a representative song from Alborada:

Ananau by the group Alborada

Lunch ran late, so we had to rush to catch our train from Aguas Calientes back to Ollantaytambo. Despite the rush, I had time for a few photos. 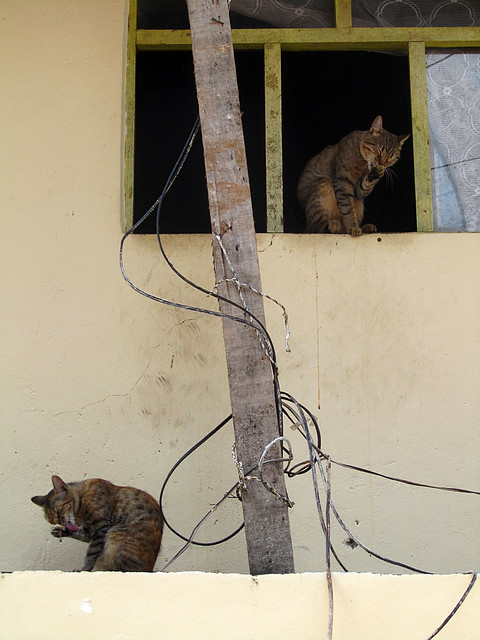 In the mercado near the train station, I was waylaid again by children. (Not that I minded.) They were playing with bugs. I squatted to look closer. “Qué es eso?” I asked one girl.

“Mi mano,” she said, indicating her hand. I laughed.

“Mariquitas!” the kids said in unison, and they held up their arms to show me the ladybugs. Then they started putting them into the palm of my hand, counting them off: “Uno, dos, tres, quatro, cinco.”

I laughed again. “Gracias,” I said. “Me gusta, pero estoy muy tarde. Debo salir.” I smiled and waved as I stood to leave. They waved back. 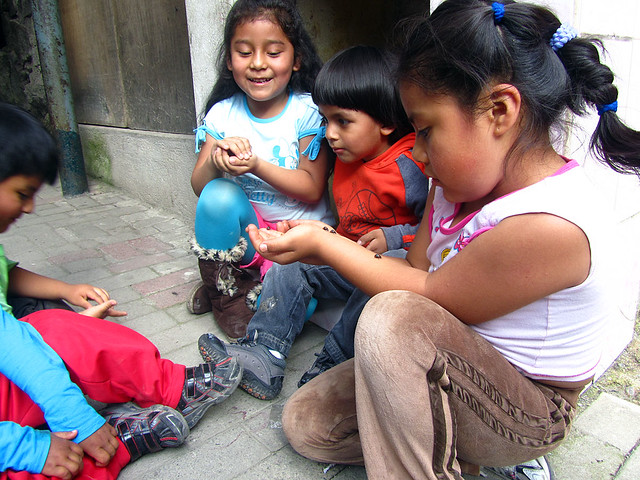 Niños playing with mariquitas in the mercado of Aguas Calientes

I expected the train ride from Aguas Calientes to Ollantaytambo to be a dull affair, but it wasn’t. Looking out the windows and consulting a map, our group picked out the places where we’d walked along the Urubamba River. We talked about future plans and enjoyed the on-train entertainment, which included music, dancing, and a fashion show (!!!). 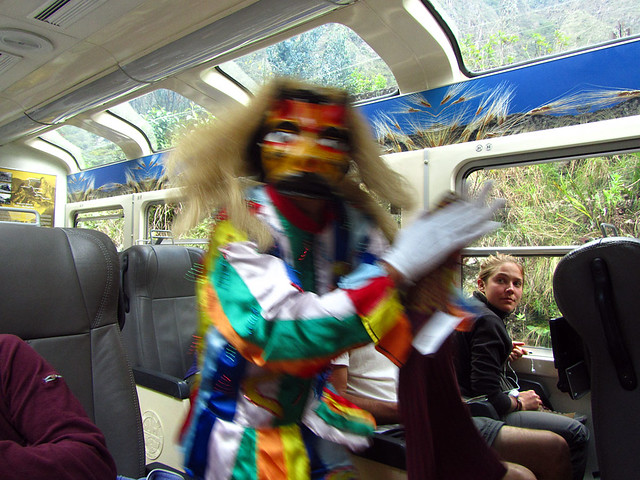 When we reached our hotel in Cusco at about 19:30, we experienced our first real glitch of the trip. After two weeks on the road, we were all eager to do some laundry, and our guide (Pepe Lucho) had arranged for a laundry woman to meet us at the hotel. All well and good, except our bags weren’t waiting for us. We were all carrying small daybags, but the bulk of our possessions had been separated into two other bags, and most of the dirty laundry was missing.

After half an hour in which we all imagined wearing the same stinky clothing for another ten days, our bags finally appeared. We sorted the laundry, then headed for a fine dinner at Pacha Papa, which we’d enjoyed during our first stint in Cusco. I had the ají de gallina (a sort of Peruvian curried chicken) and two maracuyá (passion fruit) sours.

It was a fine ending to a fine day.

What made the day so special? I’m not sure. For one, little was planned. Everything (except the tour of Machu Picchu) happened spontaneously. For another, there was tremendous variety: the natural beauty of the mountains, the splendor of Machu Picchu, the strenuous walk down the hill, the lengthy chat with Carl from Antwerp, the interaction with the kids, the delicious food, the enchanting music, the surreal train ride, the problem with the luggage and laundry, and so much more. (I haven’t even mentioned the wild van ride from Ollantaytambo to Cusco over the dark and dangerous Peruvian roads!)

This entire trip has been amazing, but I think yesterday was my favorite day so far. And now it’s time for me to stop writing. I want to go out and see Cusco. I want today to be amazing, too.