Four years ago today, my best friend killed himself. Paul (aka “Sparky”) and I didn’t see each other much in the years leading up to his death, but every time we did, I learned something about myself and about life. I miss him. To commemorate Paul’s passing, today I want to share the eulogy I wrote for his memorial service.

Paul was one of my best friends for 25 years, but we never could remember when we’d met. It must have been in junior high school. In my eighth grade yearbook, he wrote: “Your a nice friend and a good bud”

Despite this, we had no real memory of each other until sophomore year of high school. We were seated together in Mr. Nichols’ second-period American Lit class. Paul was sat behind me on the left edge of the classroom where we quickly formed a coalition of wisecracks. Who knew John Steinbeck could be so hilarious?

Before long, Paul was my best friend. We shared a locker. We shared music. We shared clothes. And we began to share ideas. From the start, Paul and I had radically different world views, though that did not stop our friendship. Instead, we each saw it as a challenge: how could we persuade the other fellow that he was wrong. 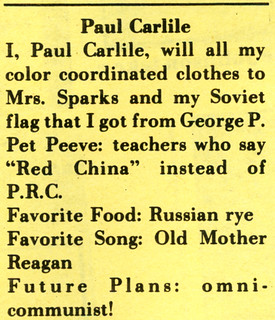 I remember one night I drove Paul to a football game in Newberg. I don’t know if we ever got out of the car. We sat in the parking lot and debated the existence of god and the nature of the universe. When the game was over, we drove home, more satisfied than if had actually sat in the bleachers and showed school spirit.

We shared soccer together, too. Paul was always the better player. He had more passion. He was more competitive. At one soccer practice at the start of our senior year, the coach had us play a game of “mob tag”. Paul took it upon himself to tag me, which he did by throwing me to the ground and falling on top of me. I was angry with him after that. He tore up my knee. For the rest of the season, he ran up and down the field while I hobbled on the sidelines, walking on crutches.

I forgave him for that, though. How could I help it? His laughter and enthusiasm and spontaneity were the perfect counterpoint to my own contemplative nature. He was yin and I was yang. He dragged me to see Frankie Goes to Hollywood in concert. I roped him into joining me for Bible study. He convinced me to go out dancing on a Friday night. I persuaded him to stay at home and watch foreign films with me the next.

We went to different colleges, but we still made time to see each other. During our freshman year, we managed to scrounge up enough cash to buy tickets to see U2 play in Vancouver, B.C. We boarded a bus in Portland at 9am, rode all day, watched the concert, and then rode back home all night. We were dead tired, but it was a transcendent experience.

As we grew older, I settled down. I got married and bought a house. Paul did not. Paul was a nomad. He worked odd jobs and traveled. But a few times every year, we’d get together to play racquetball or to go play videogames at the nickel arcade or to ride our bikes. Sometimes we’d argue about philosophy. Paul was always challenging me, and I tried to challenge him. 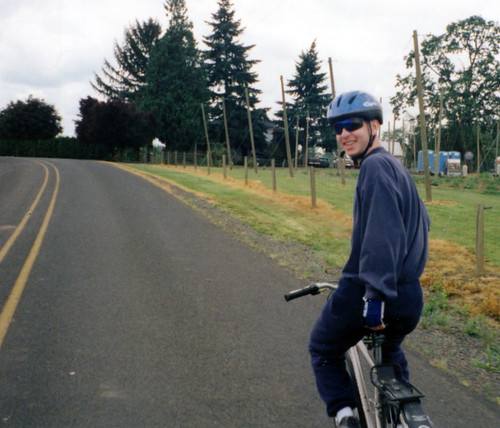 In 2002, I began to play soccer again for the first time in 15 years. I joined an adult league in Portland. My career was short-lived. In the second game of the season, my knee gave out, that old high-school injury coming back to haunt me. The doctor told me I’d torn my ACL and would need to have surgery. Soon after this — but before the surgery — Paul came up to see a movie with me. We were climbing a wet and grassy slope to reach the theater when my knee gave out. I fell to the muddy ground. “This is your fault, you know,” I said angrily over my popcorn. But I couldn’t stay angry for long. We laughed about it, and before the previews began we were reminiscing about the high school soccer team.

And that’s the thing about Paul. He always made me laugh. He pushed my comfort zone, and made life fun. He encouraged me to try new things, and to be better than I was. He believed in me more than I believed in myself. He made me a better person.

Paul is gone now — but he’s not. I’m reminded of him every day in countless little ways. First thing in the morning, when I get out of bed and walk downstairs, I have to shuffle sideways like a crab. My bum knee hurts. That’s Paul. When my knee hurts, I think of Paul, every single time. It’s as if a piece of him is in me. When I hear U2, I think of him. When I get on my bike, I think of him. And every time I meet and talk with one of you, I will think of him, too.

Four years later, I think about Paul all of the time. I think, especially, of the memorial service at the University of Oregon. An overflow crowd squeezed into a room in the library. We shared memories of our friend. A week later, after the church memorial service in Portland, a group of us went out for drinks. That brought a bunch of us together who hadn’t really reconnected in years. Four years later, we’re still in touch.

I’ve regained some old friendships because of Paul’s death. It reminds me of a Spanish proverb that means a lot to me: No hay mal que por bien no venga. In English, that would be “There is no bad from which good does not come.” Or, more colloquially, “Every cloud has a silver lining.” I’m grateful for the friendships that have been rekindled due to his departure, but I still miss Paul very much.