Getting a Haircut in Istanbul

Tonight, I got the best shave and haircut of my life.

One of the things I like to do when I travel is to get my hair cut in other countries. I’ve also become accustomed to getting a shave. (A professional shave can be expensive in the U.S., but it’s surprisingly cheap elsewhere in the world.)

In Cusco, Peru, I asked for a shave at the hotel salon. It was terrible. The woman was very nice, but she had no idea what she was doing. She shaved my entire beard using teen tiny amounts of shaving cream. It was essentially a dry shave, and it hurt like hell. 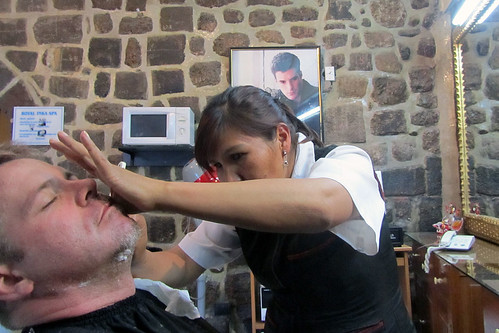 I had a nice chat with this woman, but the shave was miserable

I had to finish the job myself back in the hotel room. It was a miserable experience.

A few weeks later, though, I had a great haircut from a young man in La Paz, Bolivia. We tried to talk to each other, but my Spanish was just too weak. (Though it was better than his English.) The haircut was great and only cost about $7 US, including tip. 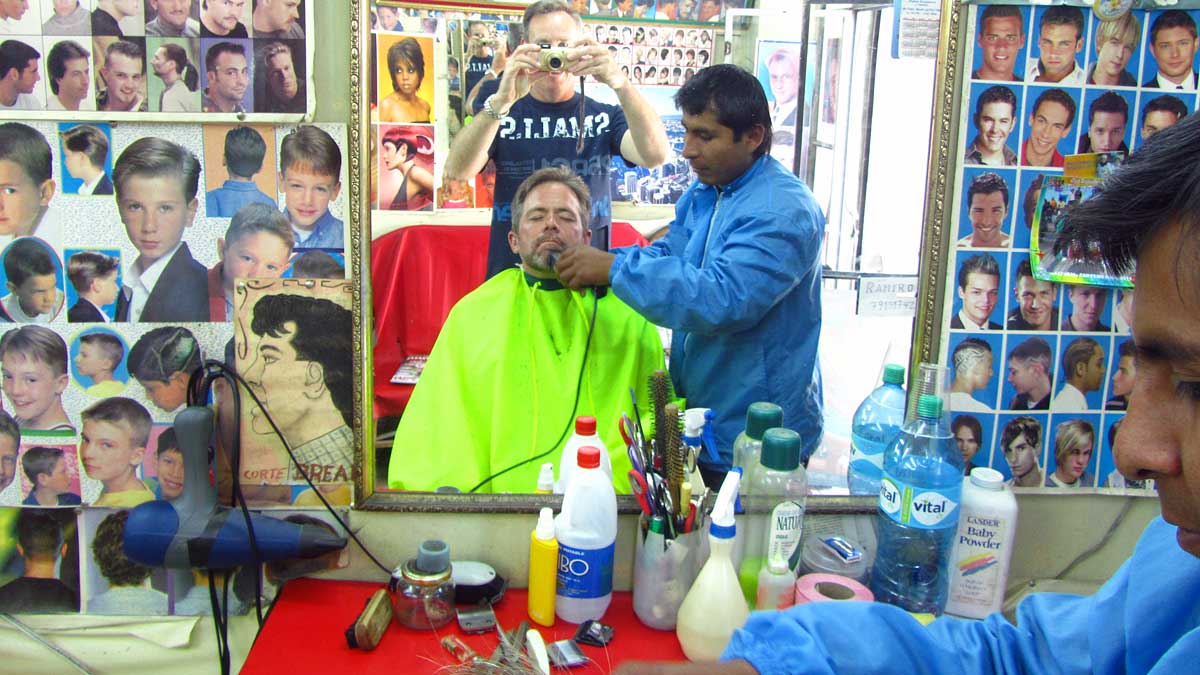 Getting my hair cut in Bolivia

So, of course, I told Nick that one of my goals while we’re in Istanbul is to get a shave and haircut. I just didn’t expect it to happen so soon.

But today after we toured the Dolmabahçe Palace, we took the funicular up to Taksim Square. From there, we walked down İstiklâl Caddesi, a pedestrian mall lined with shops and restaurants. The place was jam-packed, but the side streets were much more interesting and much less crowded. (On one side street, we tried stuffed mussels. But Şalgam, the drink I chose, was awful!)

Near the bottom of İstiklâl Caddesi, we passed a barber. “You could get your haircut and shave here,” Nick suggested.

“Nah,” I said. “I don’t feel like it.” But at that moment, the barber saw us and beckoned us inside. This is a very minor come-on compared to most in Istanbul — merchants are aggressive here — so I gave in. I did need a shave and a haircut, after all.

“How much?” I asked, but the barber didn’t speak English (and I don’t speak Turkish). Still, he understood what I meant. He pulled out a ten lira note. I agreed and sat in the vacant chair. The barber’s partner entered the shop and put a towel around my neck. The process began.

My barber — whose name was Ibrahim — started by lathering my face for what seemed like an eternity. It was very relaxing. Then, he shaved me in short, sure strokes. He pulled my skin taut and scraped quickly. Before long, he’d stripped me of all my facial hair, even my mustache and goatee. 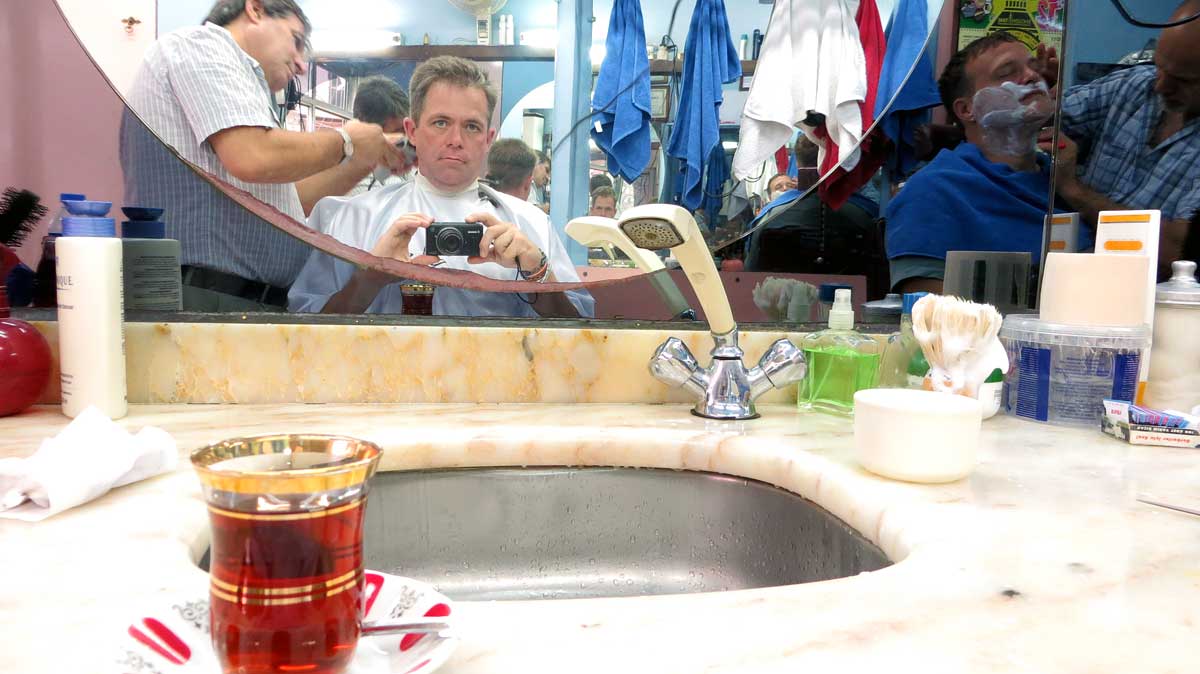 A cleanly-shaven J.D., which doesn’t happen very often. Nick is to my right.

“Chai?” Ibrahim asked me. At first I refused, but eventually gave in. He scurried next door and returned with a glass of hot tea for me and one for Nick (who had succumbed to the other barber’s pressure and was getting a shave in the seat next to mine).

After I’d begun to sip my tea, Ibrahim shaved me for a second time. When he was finished, he pulled his fingers through my hair. “Cut?” he asked. Again, I refused, but Ibrahim’s gentle insistence was enough to win me over. Even though I just got my hair cut two weeks ago, I agreed to let him cut it.

The haircut was meticulous. He took twenty minutes going over every single hair on my head. It was as if he were manicuring a lawn.

Then a couple of surprising things happened. I was sort of drifting off to sleep (I still have jetlag) when I felt a strange burning on my ears. I opened my eyes to find — WTF!?!? — Ibrahim was singing my ear hairs with a cigarette lighter. In my 43 years on this earth, I’ve never had a barber do that to me. I didn’t even know it was a thing! 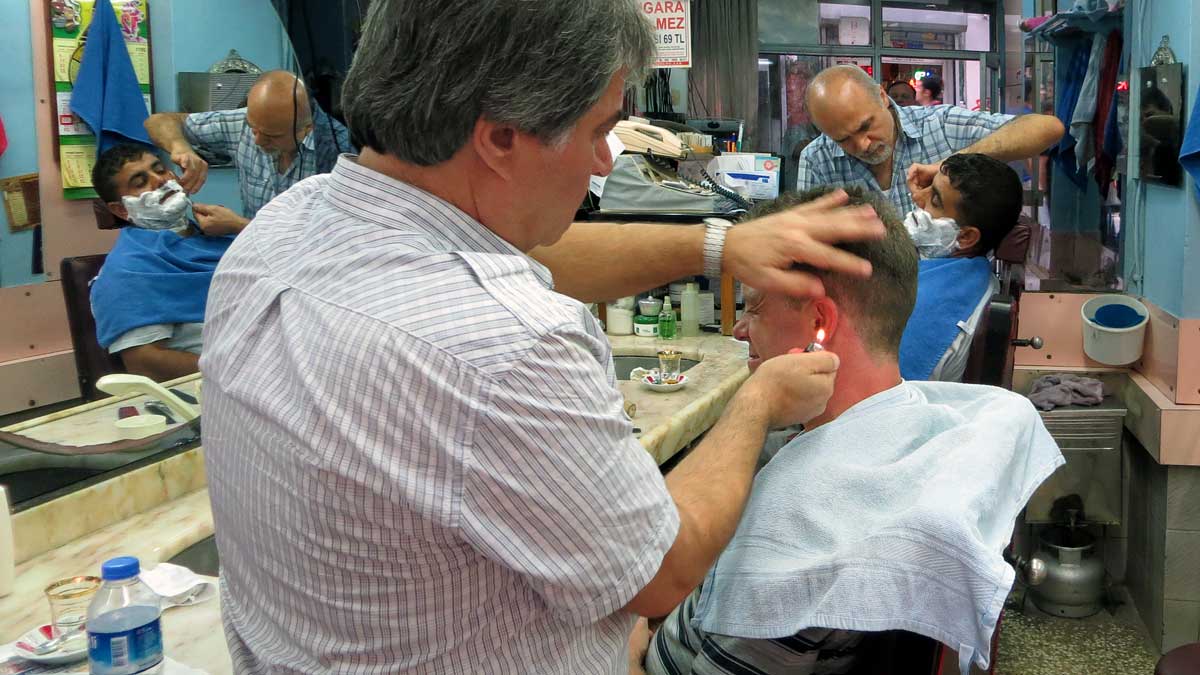 Next, Ibrahim had me put my head face-down in his sink. He turned on the water, lathered up with soap, and then washed my entire head, front and back. Strange, but satisfying.

Finally, he doused me in aftershave and cologne. The aftershave didn’t just go on my face; he poured a generous amount over the top of my head and massaged it into my scalp. After give squirts of cologne, I felt as if no woman could possibly resist my scent!

When Ibrahim had finished, he whipped away the apron with a flourish and waved his hand to indicate the master had finished his performance. “How much?” I asked. He wrote the answer on a pad of paper: just 25 Turkish lira. I gave him 35, or about $20 US. Best haircut I’ve ever had in my life, and a bargain at twice the price.

I’m telling you folks: If you want to have fun, get a haircut (or a shave) when you visit another country. Or find something similarly mundane. When you don’t know the language and you don’t know the culture, the commonplace can be a fun way to connect with other people.