My father would have turned 61 today. In memory, here’s a piece that my Aunt Virginia posted at her site a few weeks ago: her memories of growing up with Dad.

We tiptoed around the house, everything had to be quiet.  My mom tied a hankie around my nose so I wouldn’t breathe out any germs.  I quietly approached the bedroom and under the window was a basket, and in the basket was a tiny new baby.  It was a brother.  I looked at him, but I dare not touch him, I might give him some germs that were on my hands.  He was so tiny and looked so sweet, how I longed to touch him, but that must wait.

As he grew older (at about 9 months) his crib was kept in the living room.  He learned that by standing up and pulling on the edge of the crib and wiggling back and forth, that he could make the crib move, and that is just what he did, from one end of the living room to the other.  The only problem, at one end of the room there was a wood stove.  I always worried that he would run into the stove and get hurt but he never did.

As he grew older he would follow me whereever I went.  I loved my little brother and played with him by the hour.  We made mud pies  (without germs. of course) and we made roads in the dirt with his roadgrader and dump truck, my big brother helped us and we built a road from the house to the woods which was over a quarter of a mile away (I’ll probably get some feedback on this) but we drug the hoe behind us to scrape the ground wide enough for our trucks.  There was a cowpath most of the way so it wasn’t too hard. It went through the barnyard, down the lane, through the woods and over to a patch of timber which my father was having someone log it.  The big firs were on the ground and there were little houses to be made under the limbs that were held up by their branches.  There were logs (little short limbs we would cut with an ax) and bring them up to the house to be put in the log pond that my older brother had dug and filled with water.  We played for hours. 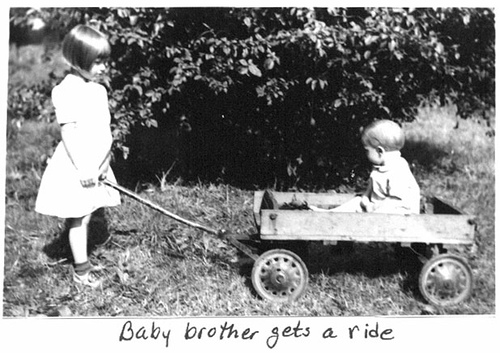 Soon he was old enough to enjoy the Bobsey Twins (books) and I read to him by the hour.  We were together almost everywhere.  I remember one time we were staying at my aunts house and we found a tame chicken. We played with it and dressed it until the poor thing died. Of course we had to have a funeral.  My cousin (who is a preacher today) preached his first funeral sermon that day and after the burial and so much mourning. We decided to play funeral.  We took turns being the dead one and the only thing we could find for a casket was the bathtub. So first one of us and then the other would take turns being dead while they other would solomly and mournfully sing “Jingle Bells”  (the only reason I know this is because my aunt told it many times in my hearing)

For many years while we were growing up we would stay with my aunt for a couple weeks. We would look forward to this vacation with anticipation. We turned summersalts and cartwheels on the lawn in the evenings. One evening as he was teasing me I went running around the house to get away from him and straight into my boyfriend who had arrived and was talking to my dad at that moment.  (Pop still teases me about that, the problem is, I didn’t know he was comming and was caught in my playclothes, not dressed up at all)

As we grew older Steve and I would talk together about our plans and dreams for the future.  I got married at 16 and Steve worked for my husband peeling cascara bark during one summer. He went away to school and we sold his VW for him. He wrote, I wrote.  He just loved my first baby and would carry her around when ever he could.  He was a great tease and of course would tease my little girls till it was a fright.  He would tell them he would put them on the roof of the house if they wouldn’t be good. Of course they loved him dearly in spite of all the teasing, there was no one like uncle Steve.

Time goes on, he fell in love with a pretty young lady and was married, had his own children and they grew up.  The day came when he told me he had cancer and of course after a long hard battle he was gone, and all I have today are memories, but, Steve…