How are you? How is mother? I am fine. It is difficult for me to hold this pen in my cloven hoof, so I will be brief. Ungulates will never be scribes, I fear.

It has been many moons since I’ve returned home to Bloodhoof Village. I miss the grassy plains of Mulgore, but I feel I am doing right. The humans and the elves and the gnomes press in from every side, threatening to take our land from us. The dwarves (dwarfs?), especially, are very upsetting. They dig deep mines in the Earth, carve great gashes into the mountains, all in the quest for shining metal. They scar the world, and the world cries out. I hear the cries. Though it never pleases me to kill, kill I must. I admit to some satisfaction when I pierce a dwarven heart with my arrows. Dwarves are foul, nasty, smelly creatures. 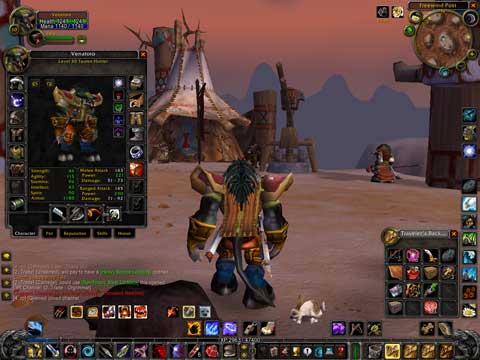 Since I left the herd, I have learned the ways of the hunter. It is difficult for me to hold the bow, ’tis true, but I do my best. My training as a hunter complements the teachings of the Earth Mother, fits well with the way of the tauren. I grow more in tune with nature every day. I have learned to speak to the animals. I tame wild beasts, and together we seek to cleanse this land of evil. Presently my companion is a bear from Ashenvale Forest. He is a good sort of bear, friendly, and quick with a joke (though bear jokes tend to be esoteric). His bear name is unpronounceable, so I just call him Jolly. He eats too much, and is often sorely wounded, but I like his company. I’ve also acquired a pet bunny that I call Snowball. Snowball doesn’t talk much, but he’s a cute little thing, and Jolly hasn’t eaten him yet, so that’s good. 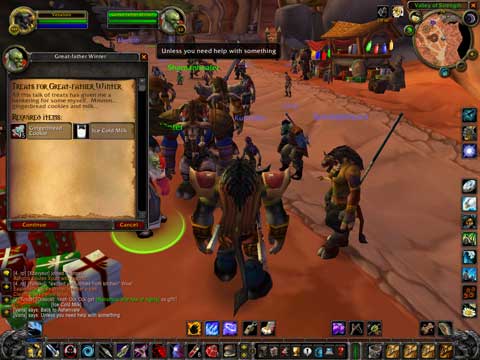 You remember, of course, that I found my way to Orgrimmar in the orcish land called Durotar. The city is huge, as big as our Thunder Bluffs, if not bigger. There are all manner of friendly people there: orcs, trolls, and tauren from other herds. (There are also a few undead about. I know Thrall has allied himself with the zombie lord, but I cannot abide his minions. They are grotesque mockeries of nature, these living dead. I will never work alongside one.) From Orgrimmar, and from encampments in the Barrens, and in Thousand Needles, and in the Stonetalon Mountains, I am given tasks by wise and powerful men. “Rid our land of the greedy goblins who deforest our hills,” they tell me. “Discover the source of the polluted waters. Kill the giant sea monster that has been terrorizing the coast.” I do as they bid and they pay me well. 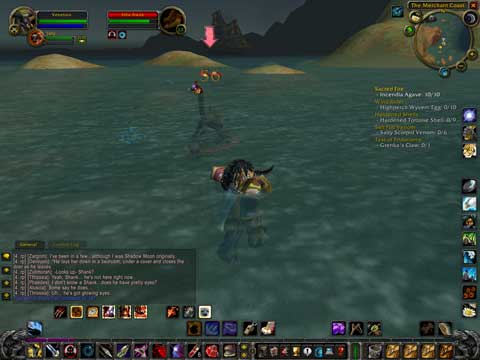 You would not believe the places I have seen. I have flown through the sky, father, on the back of a giant bat! I have swum in the ocean! (Not an easy task with hooves.) I have ventured deep into the heart of a mountain, fighting terrible lizards and cursed elven druids! I have traversed salty deserts, and cut my way through thick tangles of jungle. This world of ours is vast and beautiful. Just today, I raced through Feralas, a wooded land that lies south over the mountains from Bloodhoof Village. Danger swarmed all around: the wolves and bears would kill me if they could, but I made my way to Camp Mojache, a tauren outpost. It pleased me to think that we were only a few miles apart, even if we were separated by an impassable wall of rock. 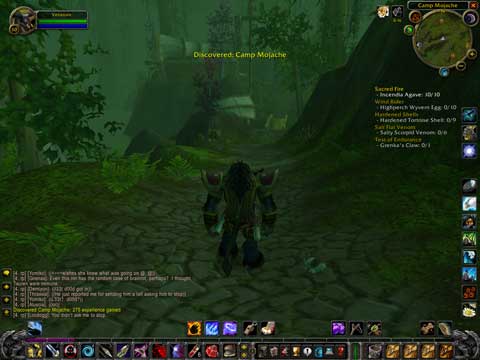 I have made some friends. Zephyrus is a member of another herd; I believe he is from Northern Mulgore, near the Red Rocks region. He is a shaman of uncommon insight, wise even in the ways of the hunter. His advice is invaluable. Bulla is a fierce trollish warrior, and perhaps my closest friend in all of Azeroth. I do not see him often, but when I do, we cut a swath of righteousness through the world. Together, we recently purged a dwarven infestation from the Barrens: we destroyed dwarves, mining equipment, and even flying machines. I’ve also recently met Cotys, a young orcish shaman who is kind and quiet, but sure to be a friend in the future. 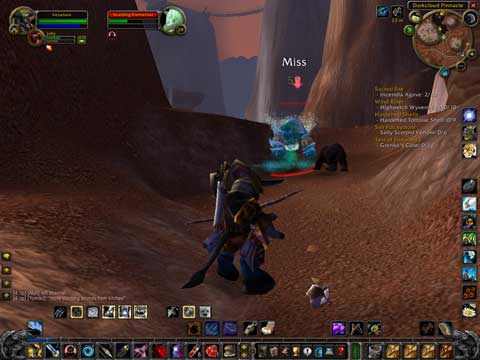 In addition to my talents as a hunter, I’ve developed an affinity for botany. You remember how as a calf I was fascinated with all the various flowers and herbs to be found in the hills? I’m afraid I’ve carried this obsession further now that I am nearly a bull. As I wander from place-to-place, I keep my eye out for fascinating plant life. I harvest every new flower and herb and vegetable, and I place seeds and cuttings in a special bag. I have quite a collection now, more than I can possibly use myself.

For a time, I sold my extra seeds to vendors in the villages. My expenses are high, though, and I discovered that I could earn more money if I sold my plant materials at the auction house in Orgrimarr. I kill many animals on my journeys, and as you taught me, I always skin their flesh so that it does not go to waste. These leathers and hides I also sell at the auction house. And here, father, is where I make a confession. I am ashamed. I am no better than a dwarf. I, too, have become a profitmonger. 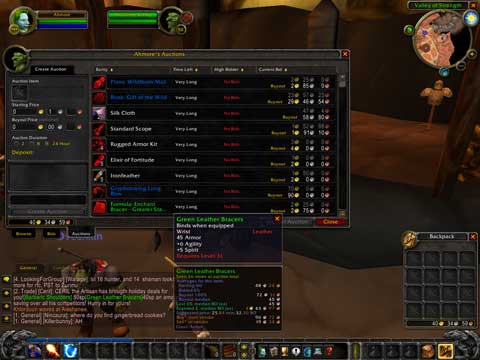 It started innocently. As I sold my flowers and leathers in the auction house, I noted that sometimes others would be selling theirs for less. In order that my goods would sell, I was forced to buy these cheaper items, and then to offer them at the same price as the goods I’d gathered. When both lots sold, I would have made a tidy profit. Then I noticed that, through chance or design, people often sold swords and bags and magical essences for less than market price. It occurred to me that I might finance the purchase of a better bow if I were to buy these cheap items and then resell them for what they were worth. And so I did, and so I profited. Copper turned to silver, silver turned to gold. I grew rich. It’s true, father: I grew rich. In only three weeks’ time, I transformed two pieces of gold into one hundred fifty! One hundred fifty gold pieces! Can you believe it? That’s enough to feed the entire herd for decades, and yet I am still not satisfied. 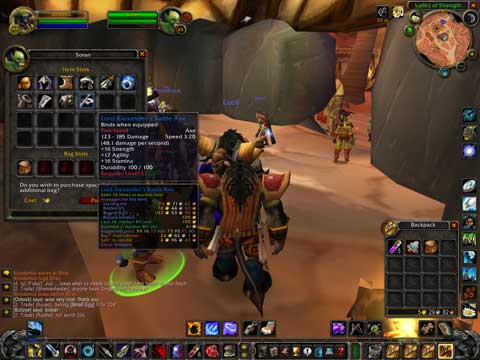 I have formed a partnership with a sickly trollish mage. He is too frail to adventure, so he spends his time in Orgrimmar, watching the auction house. I mail him all my goods, and he sells them at great profits. Using this capital, he snatches up whatever bargains are to be had. The more gold I acquire, the more profits are I can obtain. When I had only ten gold pieces, I could only buy inexpensive items and make small profits. Just yesterday, father, I purchased a powerful bow — one I cannot wield for months or years — I purchased it for fifty pieces of gold and in four hours I had sold it for ninety. Ninety pieces of gold! Forty gold in profit! My head swims.

This morning, as I took stock of my inventory, I counted 148 gold pieces in my purse. Secreted in a bank vault, I have ten pieces of valuable equipment, including Lord Alexander’s Battle Axe. This is a powerful weapon, father, one that I could easily sell for 80 gold pieces. My trollish partner has even more equipment such as this.

Can you believe it? I am rich! I am amassing a fortune. I can dream of a day when I will be the richest man in Azeroth. For you and mother, I will build a private range filled with the juiciest leaves and grasses. You will no longer have to work for the chief; mother will not have to carry water from the well. We shall suck on the teats of fortune and grow fat. Is this wrong of me to say? So be it. The Great Bull has blessed me.

Walk with the Earth Mother. Your son, Venatoro.