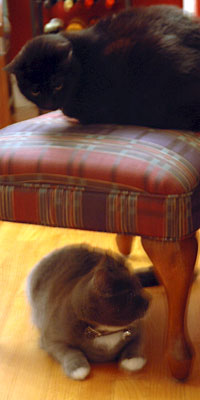 It hasn’t taken Max long to become my favorite cat at home. He’s lovable: he’s soft, he’s cuddly, he’s playful, he’s quick to purr. He’s quick, intelligent, ornery, and non-aggressive. Simon and Nemo are warming to him, though they’re both worried he wants to play a little too much. Even Toto sometimes forgets to growl or hiss at him.

The only real trouble is that Max is lost outside. When he lived at Custom Box he was outside most of the time, but he spent that time with his brother (and their chicken friend). I’ve begun to let him outside here for supervised exploring, but he seems confused. “This isn’t the place I’m used to,” he seems to say, and he bolts to the bushes.

On Saturday morning, Max had an adventure.

“You should take Meatball outside,” Kris told me. I was laying in bed. “His brothers are outside, and he’s complaining about the injustice.”

I pulled on my pajamas and called Max to the door. He bolted outside, exhilarated by the cold air on his fur. He ran up to Simon and bumped noses. Then, as Simon sniffed the discarded Christmas tree, Max ventured into the trees and bushes at the south edge of the property. I stood back, watching him. He sniffed everything. Eventually he made his way to the street and began to cross it.

“No no, Meatball. Guess again,” I said. I picked him up and carried him back to the lawn. He returned to the shrubs.

He was intrigued by the neighbors’ yard, but annoyed at the chain-link fence that separates the spaces. No matter. He used his cat-like reflexes to leap onto the fence and then drop to the other side.

“You meatball,” I said. He wandered from tree to rock to bush to camper, sniffing everything. Then I heard the dogs barking.

The neighbor dogs are friendly enough, but they’re dogs. If they see a strange cat, their dog-minds turn to sport. They mean no harm. They’re just dogs. “Max,” I called softly. “Max. Come here. Come here, Meatball.” He ignored me, as cats are wont to do.

I went to get Kris. “I need your help,” I said. “Meatball’s in the neighbors’ yard.” She grabbed their Christmas basket and we walked next door. The dogs — Jasmine and Larry and Charlie — came to greet us. We looked around, but we couldn’t see any sign of Max.

We spent a few minutes visiting with Tammy. We gave her the gift basket. She gave us some rum cake. Then we mentioned that we had a new cat, a new cat that was currently someplace in her yard. She laughed and called the dogs inside. We went out to find our boy.

I checked under the camper. Kris checked in the arborvitae hedge. “Max,” I called, “Maxie!” Kris called for him, too: “Meatball. Come here, Meatball!” He was nowhere to be found.

“I wonder where he could be,” I said. “Maybe he went back over.”

Just then Kris spotted him. “There he is,” she said, pointing into the neighbors’ magnolia. “What a meatball.” He was as high as he could get — 20-25 feet off the ground — out on a limb.

“I’m too old for this,” I said, when I realized what I had to do. Magnolias aren’t great climbing trees, not even grand old magnolias like this one. But I did my best. I climbed about halfway to Max, and then tried to coax him to me. He understood my intention, but, quite frankly, didn’t find “down” as easy as he had found “up”. It probably took him ten minutes to scrabble down five feet to where I could reach him.

I steeled my mind (as one must do in these situations). “Pain doesn’t matter,” I told myself. “Whatever he does, no matter how much he scratches, it’s most important to get ahold of him.” I grabbed him and pulled. He squirmed and clawed, but I managed to pull him to my chest and soothe him. Then I realized there was no way for me to descend, especially while holding a cat. “Here,” I said, and I dropped Max onto a large branch below me. From there, Kris was able to grab him.

I ran back to our yard while Kris carried Meatball to the fence. She dropped him into the underbrush, and he ran for the mudroom door. “At least he knows where home is,” I said.

Max spent the rest of the day inside, cuddling with Mom and Dad. 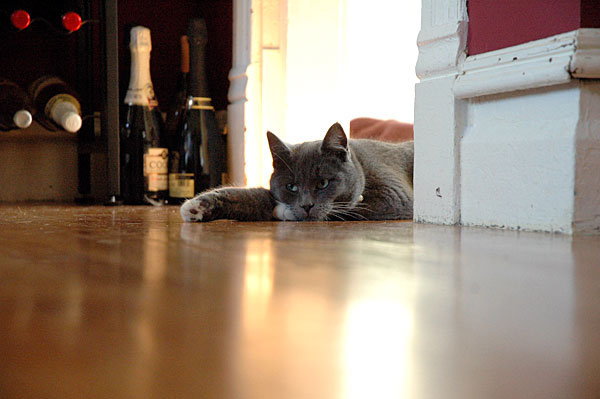