When I was a boy, I loved motorcycles. I was fascinated by the exploits of Evil Knievel, and liked watching motorcycle riders on the highway.

In college, Kris had a Honda Spree scooter. That was fun. When we moved to Canby, though, she sold the scooter, and for twenty years, I didn’t ride again. Then, last year in Turkey, I spent an amazing day riding a scooter through Cappadocia. Combine that experience with a girlfriend who loves motorcycles (Kim has ridden them since she was twelve), and suddenly I had a goal. I wanted to get my motorcycle endorsement.

That’s not just a formality here in Oregon. To get your motorcycle permit, you need to pass a written test. (Which I did on a whim last October.) To get the motorcycle endorsement on your license, you need to take an officially-sanctioned three-day motorcycle training program. Kim and I have been talking about doing this together for over a year. In August, we finally made it happen. 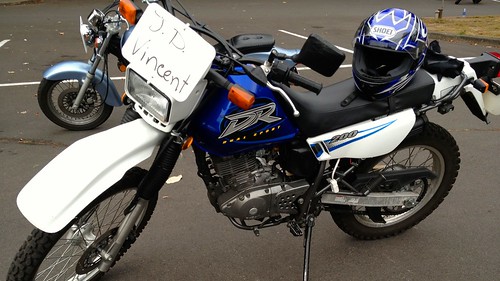 I learned to ride on this Yamaha dual-sport bike. 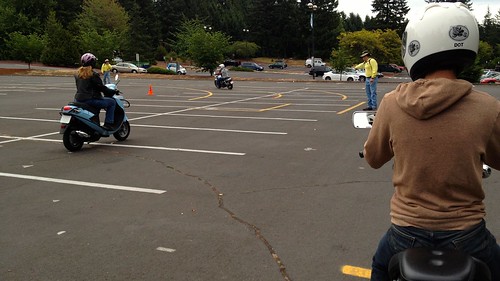 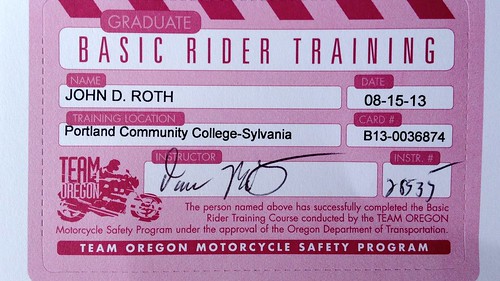 At the end of July, Kim bought her father’s Harley Sportster 883. He rode it from Boise to Portland; we drove him home. While in Boise, we all went shopping at the Harley store. Kim came home with these kick-ass riding boots. 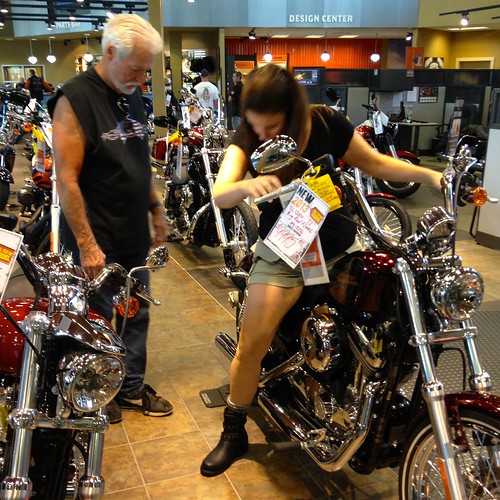 After I finished the motorcycle training program, I looked around for a “starter bike”. It didn’t take long to find a white 2006 Honda Rebel with only 3400 miles on it. 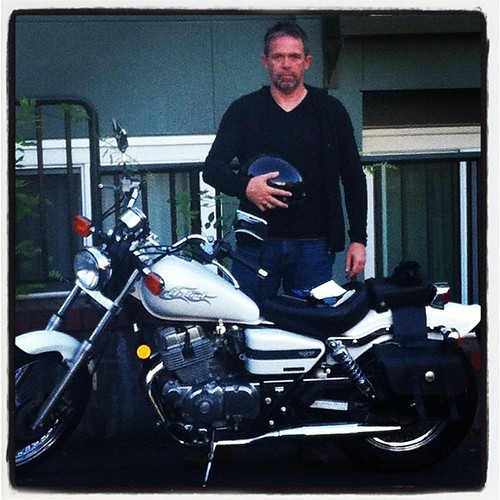 Our friend Cody also wants to learn to ride. The first free Sunday, we took him to an empty parking lot and taught him the basics. The three of us spent a couple of hours going around in circles, weaving between water-bottle cones, and practicing quick stops. 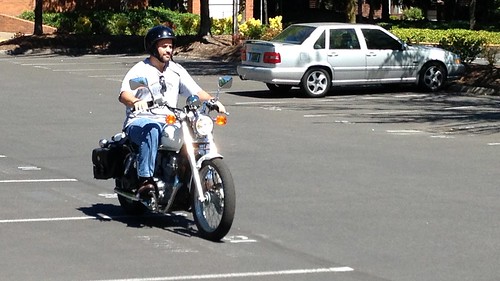 Cody on my Rebel, getting the hang of gentle turns.

Feeling confident, I started riding my bike for errands. Very fun. And so much better to make dumb mistakes (I keep stalling in first gear!) at low speeds and in light traffic.

I was twenty minutes early for an appointment recently, so I decided to ride my motorcycle around the neighborhood. Up hills. Down hills. Around gentle corners. And so on.

I had slowed to take a sharp corner when I laid my bike down for the very first time. I’d turned my head to look into the turn, as I’d been trained to do, but had failed to account for the thing layer of loose gravel on top of the road. At about 12mph, I leaned into the turn — and the bike slid out from under me. It stopped almost immediately, coming to rest on my right leg. Ouch!

Fortunately, all I suffered were skinned knees and elbows and a bruised ego. And I learned a valuable lesson. Even a little gravel is hazardous to a motorcycle in a turn.

I’m actually a very cautious rider. I’ve been an avid bicyclist for over a decade, and I’ve been in one bad car crash. I know the biggest danger on the road is other drivers, so I’m very wary. And having crashed my bicycle several times, I know how important it is to get back out there and ride. If you take time off after a crash, you psych yourself out. You become afraid to ride.

So, naturally, I haven’t let me little motorcycle accident dampen my enthusiasm. As I prepped to leave for Ecuador, I completed all my errands by motorcycle. And I can’t wait to get home. There should be a couple of nice weekends left for me and Kim to take some joyrides through the Willamette Valley. And just wait until next summer! By then, I hope to graduate from my “starter bike” to something with a little more power…