While in Alaska last month, I confided in Kim that I’m terrified of bears. It’s true. All my life, I’ve been ursaphobic.

My fear of bears is a real problem when I go camping. Unless I’m in a large group, I’m always nervous — especially if the camping trip involves a long hike into remote territory. It’s also a problem any time I go to Alaska.

When I visited Alaska in 2010, I had a couple of close encounters with bears. The first time, we saw a group of bald eagles feeding on some grizzly corpses near the shoreline. (Yes, the bears were dead — killed by hunters on another boat — but I knew there were probably more around. And I had no doubt they wanted vengeance!)

Later in the trip, Mac and I took an uphill hike at a bay north of Sitka. The well-worn trail was covered with bear scat and clawed tree trunks. I was terrified the whole time, and very relieved to make it back to the boat in one piece.

Kim finds my fear of bears amusing. On the first day of our trip, she sent me the following, which she found on Facebook: 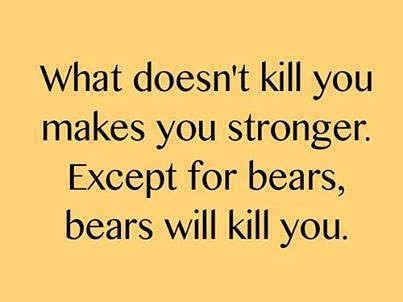 So true. So true.

In Juneau, I paused for a photo op: 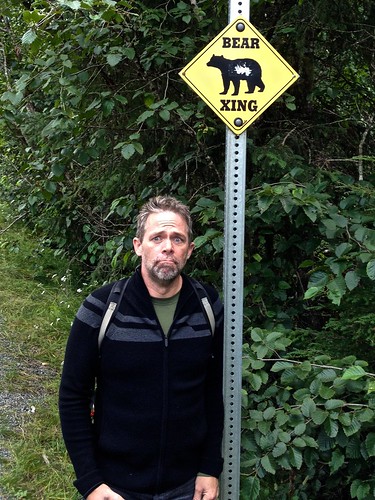 I don’t want to live anywhere signs like this are needed.

I had a close call in Skagway. Fortunately, the bear was more interested in getting me to buy jewelry than eating me (or the tasty salmon in my backpack): 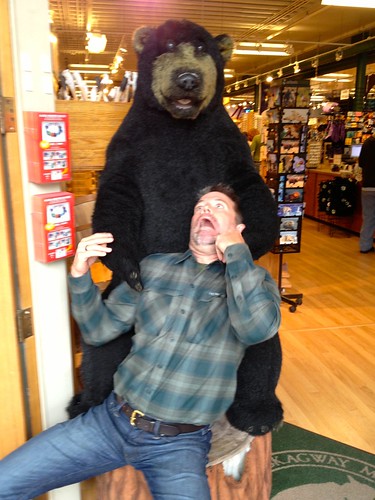 That’s enough bear action for me to last several years. Now, of course, I’m in Ecuador, where there are no bears. There are only jaguars. I’m fine with jaguars. I like cats…