I’m in San Francisco now, near the end of my marathon 38-day trip around the world. I’ve got a fun week ahead, but before I forget, I want to share a bit about what I did two cities ago. Last weekend, I passed some time in New York, my favorite city in the world.

One drawback to New York is that it’s expensive. I knew I could spring for a hotel downtown, but that it would cost me $200 or $300 or $400 a night. Instead, I made use of one of my favorite new websites. Airbnb connects travelers with rooms. If you have a spare room (or even a spare home), you list it on Airbnb and then people like me rent it from you for a night or three. You make money, and I get a good deal on lodging.

In this case, I rented a room from Rose, a young woman who was born and raised in New York City. Rose pays $3600 a month for her three-bedroom pre-war walk-up flat near Gramercy Park. She rents one room for $90 a night and a smaller room (my room) for $70 a night. She lives in the third. 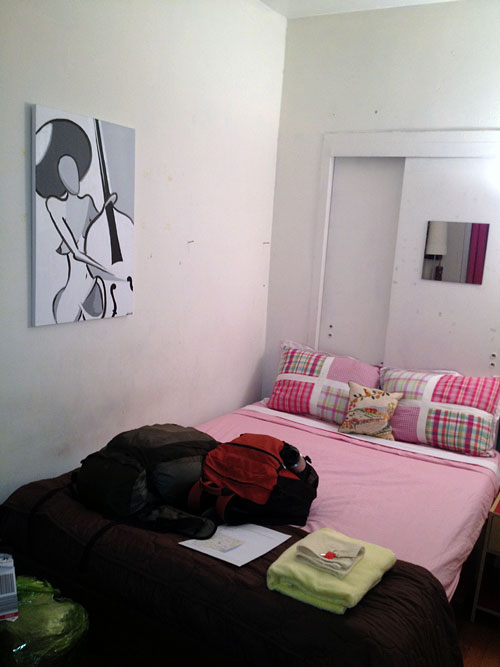 “How well do you with this?” I asked Rose one night over a bottle of cold beer.

She smiled. “Airbnb pays my rent,” she said. Seems smart to me.

For my part, I liked being close to downtown but saving tons of money. I figured I saved about $200 per night on lodging. I was able to put that money to good use by eating well and seeing Broadway shows. That, my friends, is conscious spending in action.

When I arrived in New York, I was still suffering from food poisoning that I’d picked up during my final night in Istanbul. The flight on Saturday was miserable, but I woke Sunday feeling rested and ready to go. The last of the food poisoning had finally passed, and I was eager to be active again, to see the city.

I left the apartment at 26th and Second intending to just pick a few things up at a corner grocer. Instead, I walked for more than an hour, finding myself near Wall Street in the Financial District. Then, just because I could, I slowly made my way up to Times Square.

I paused often along the way to take look and listen at the people and places around me. And once I actually reached Times Square, I climbed onto the red bleachers (new since I was last there in 2007) to watch the sleepy people gawking at the lights — just like me.

After a brief rest, I walked up to Central Park. At the entrance, I paid twenty bucks to rent a crappy bike for two hours. The thing had no rear brakes (and sketchy front brakes), and it was far too small for me, but it did the trick. I joined thousands of other folks who where walking, running, and biking through the park on a sunny autumn Sunday morning. I felt just one thing: joy.

Then, midway through my ride, I got a call from Kim. It had been exactly three weeks since we’d last spoken, and I was concerned that things might be awkward. What would it like to be reconnect after so much time apart? I needn’t have worried. Within minutes, we were chatting away like we always do. Talking with her felt like home.

We talked for two hours before we both decided it was time to get on with our days. And just in time too. Though the day had started sunny and warm, as I hung up the phone, the rain set in. All the people in the park dashed for cover, and I did too.

Later in the afternoon, I met up with Flexo from Consumerism Commentary for an early dinner at Chimichurri Grill, an Argentine restaurant on Ninth Avenue. Because I’d just returned from Turkey, a Muslim country where there’s no pork to be had, I ordered the Chuletón de Cerdo a la Parrilla: “grilled center cut pork loin, served with sautéed red cabbage, apples, sweet onions and crispy bacon”. Delicious! As we ate, we talked about blogging, about flirting, and about musical theater.

When we’d finished, we joined Ramit (of I Will Teach You to Be Rich) to catch The Book of Mormon on Broadway. This musical, from the creators of “South Park” and Team America: World Police, was shocking, offensive, and hysterical. I loved it.

I’ve never seen much “South Park”, so I didn’t know what I was getting myself into. But I grew up Mormon and I love musical theater, so I was predestined to like it, right? I’m not the only one. Flexo and Ramit liked it too, as have many other people. (The Book of Mormon won nine Tony Awards, including Best Musical.) The show is coming to Portland in early January. I’ll be there!

I spent much of Monday morning breaking apart the bulky bag of souvenirs I’d brought back from Turkey. I walked back and forth from the UPS Store at 27th and Fifth (right next to the Museum of Sex) carrying first supplies and then boxes for home. (And only after making three trips did I realize there was another UPS Store just around the corner from my apartment. sigh)

At noon, I made my way to the Time-Life Building on Sixth Avenue, where I met my editor for Time Moneyland. Over a lunch of Japanese noodles, we talked about my return to that blog later this month (or early in November). Next, I met one of my readers, Craig Anthony who writes at Money, Sex, and Focus. We chatted for a bit, and then I mentioned how much I love notebooks.

“Have you seen the notebooks at Kinokuniya?” Craig asked.

“Follow me,” he said. And I did. Craig led me a couple of blocks to a Japanese bookstore. We headed downstairs, where I was greeted by a vast wall of notebooks, all of them lovely. 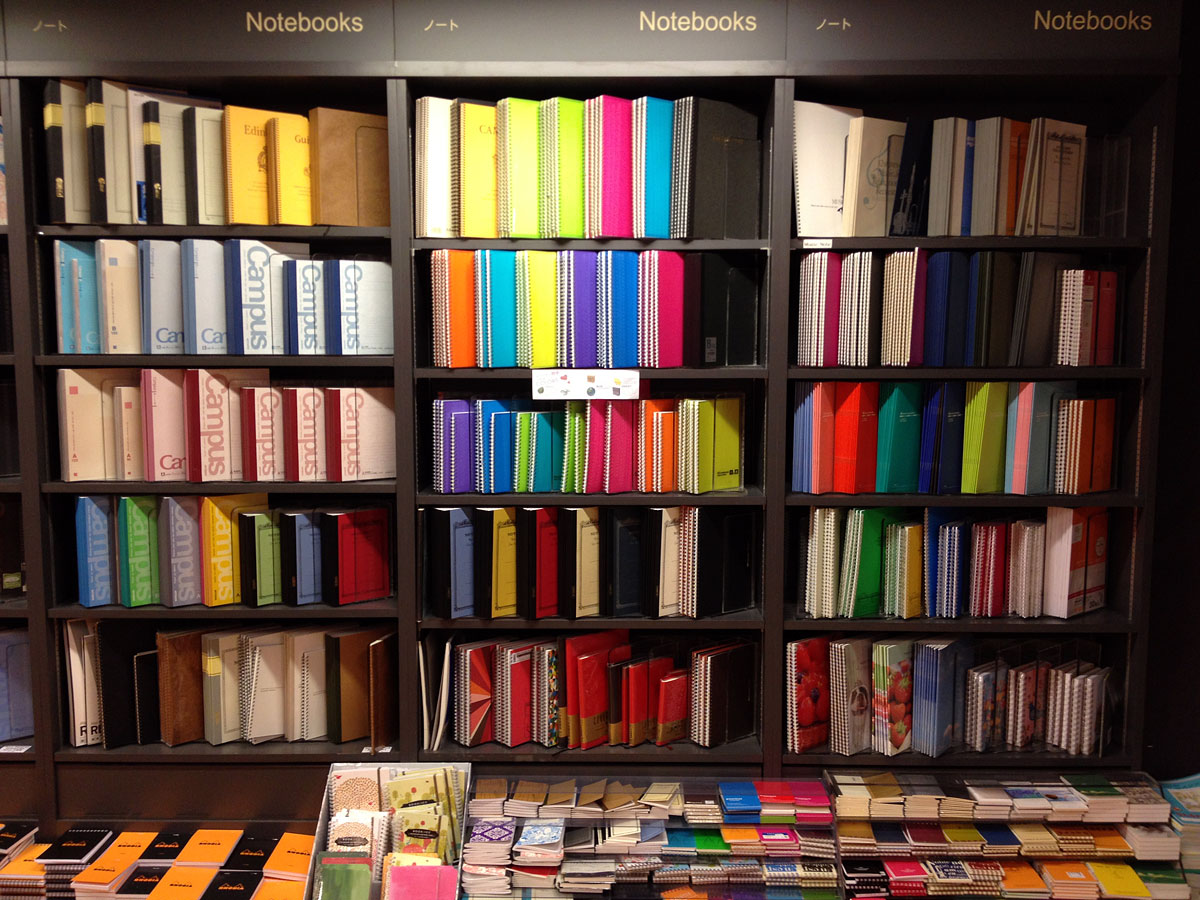 On Monday evening, I bought tickets to see Chicago, but I was disappointed. I like the film version of this show, but the Broadway production was mediocre at best. After the curtain fell, I walked home slowly, noticing the New York night life, even early in the week.

I started my last day in New York City by meeting Mike from Roboinvest in Bryant Park. Over coffee and cinnamon rolls, we chatted about travel and investing. The conversation was fascinating. After ninety minutes (that seemed like nine), I said good-bye to Mike and met up with Maneesh (best known as Ramit’s brother, but who is making his own name in the world — just watch and see).

“Let’s eat at Cafe Zaiya,” Maneesh suggested. I was open to anything, so I followed him across the street to…the very same bookstore Craig had taken me to on Monday. While Kinokuniya is filled with lovely notebooks downstairs, there’s an Asian cafe upstairs. Maneesh and I ordered food and then spent an hour chatting about his latest projects. (We also talked a lot about precommitment, a method Maneesh and I have both been using to make good choices.)

After lunch with Maneesh, I met up with Aaron, a former candidate for a staff writer position at Get Rich Slowly. We had a great conversation over coffee and donuts. When we’d finished, he showed me how to hop the subway down to my apartment so that I could avoid the rain, which was coming down in buckets.

Late in the afternoon, I met up with Maneesh again. This time we joined Sarah Peck, who was in town for a conference. When she was in Portland last month, Sarah stayed at my apartment (since I was in Turkey). While I’m visiting San Francisco, I’m staying at Sarah’s place. (I’m writing this story from her bed. She’s still in New York, so I’m using her room.) 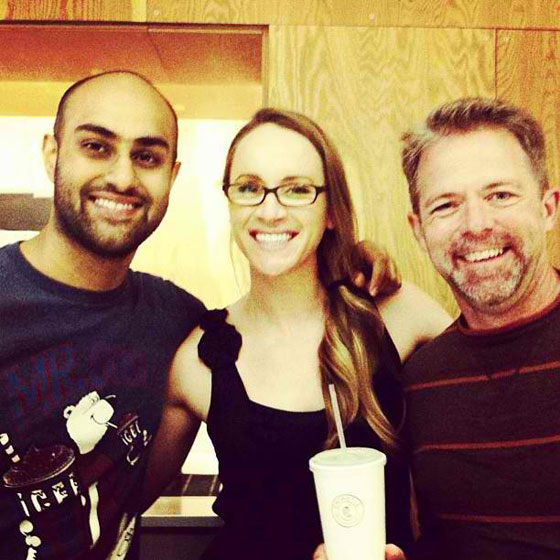 Maneesh, Sarah, and J.D., eating at Chipotle in honor of Chris G.

In the evening, I hit my third Broadway show in as many nights. This time, I saw Once, which is based on the sweet romantic film of the same name. Whereas Chicago disappointed, Once did not. I had agonized over how much to pay for my ticket, ultimately opting for a $200 premium seat. I’m glad I did.

This show is brilliant, quite possibly the best musical I’ve ever seen. Bittersweet and lovely. The set was simple but elegant, and I love the way all of the music is played by the cast members themselves (not an orchestra). No wonder this show won the Tony for best musical. Here’s one of the songs from the show:

It was a perfect ending to a perfect three days in New York, my favorite city.

On Tuesday morning, I caught a cab to LaGuardia. There, I flew to Atlanta for the third annual Savvy Blogging Summit. More about that tomorrow at Get Rich Slowly…