Yesterday, during my one full day in San Francisco, I squeezed in three meetings.

First, I met with the folks from QuinStreet, the company that owns my personal finance blog. We met at the Mission Beach Cafe, where we had a fantastic breakfast. I ate pancakes with vanilla creme and bourbon syrup. I also had a side of the best bacon I’ve ever had. And I’ve had a lot of bacon in my 43 years on this planet.

Next, I dropped by Twitter HQ to meet GRS-reader Mark Christian and a few of his fellow geeks. I ate lunch in the cafeteria, where Mark showed me what has to be the best perk of all time. Twitter employees have constant access to an unlimited supply of bacon: 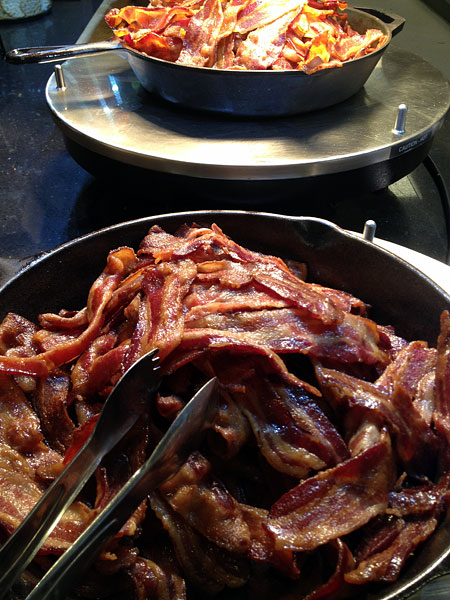 Finally, I walked over to the offices of Lending Club. Lending Club is a peer-to-peer lending platform. In plain English: It’s a company that lets regular folks like me lend money to regular folks like you, but in a way that spreads the risk. I met some of the Lending Club folks last month at Fincon 2012, and they asked me to stop in so I could learn more about their operations. I have to admit: I used to be a skeptic about peer-to-peer lending, but I’ve changed my tune. I’m going to try it out, perhaps even in a big way.

It was a good day. Along the way, lots of little things went right for me. But perhaps the best part of the day was witnessing the never-ending bacon supply at Twitter HQ. If I ever own a tech company, I’m going to offer that perk to my employees, too.