The best years of my life were spent at Willamette University. Don’t get me wrong — I love my life and, except for period bouts of anxiety, am quite content. But no memories compare to those of my college years.

Kris and I joined a small group of other Willamette alumni for a fifteen year reunion last night. Bernie and Kristi were there, looking dapper, as were other classmates we see less often: Ginger, Anne, Shelley, Martin Taylor, for example. And, especially, Paul (and his charming Stanford-educated wife, Tammy), and Aaron and Tiffany. 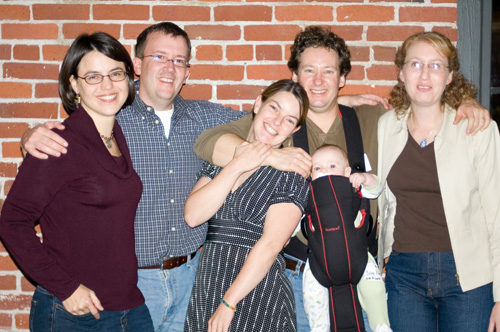 It was wonderful to catch up with these friends. It’s fascinating to hear what everyone is doing now, and to see how they both have and have not changed. For me the highlight of the evening was a long chat with Tiffany Tarrant. Tiffany was one of the residents of Matthews Hall when I was RA. She, Dan Rathert, and I took astronomy together. We loved it. We had a lot of fun. We even formed a short-lived astronomy club and published an issue or two of a newsletter. We called each other star names. Tiffany was Nunki; Dan was Ras-Al-Ague; I was Altair. I once wrote a mock love poem for Tiffany in which I declared, “You are my spiral galaxy.”

I would have liked to have seen more former classmates last night, but I’m happy for the time we were able to spend with those who made it.