Max (aka Meatball) has a bad habit. He likes to lay on the stairs, stretched long so that he takes up an entire step. This might not be such a big deal except:

As you can imagine, this presents some difficulties.

It’s official: I’m cutting back to just three blogs. I’m not sure that I shared the plan Kris and I came up with last week, but here it is for the curious:

These plans are tentative. Any number of things might change them. I might decide it’s foolish to quit. My web income might dry up. I might move to Australia. Who knows? But for now, this is the agenda.

Friday was gorgeous, just at the upper-end of my heat tolerance: sunny and 24 degrees centigrade (that’s 75 Fahrenheit for those of you who live in Oregon City). I met Matt for lunch, and then we headed to the tulip fields to take photos. Matt moved from California to Oregon a couple years ago. He’s a long-time professional blogger, and is full of great advice. Plus he likes photography, bike-riding, computers, etc. I’m pleased to have made his acquaintance.

Taking photos of tulips in the midday sun is an exercise in futility. The colors don’t photograph well under the best conditions; they’re a nightmare in the glare of the sun. The colors are so bright that they get “blown out”. Still, here are a few shots from the trip.

Two examples of “blown out” colors. 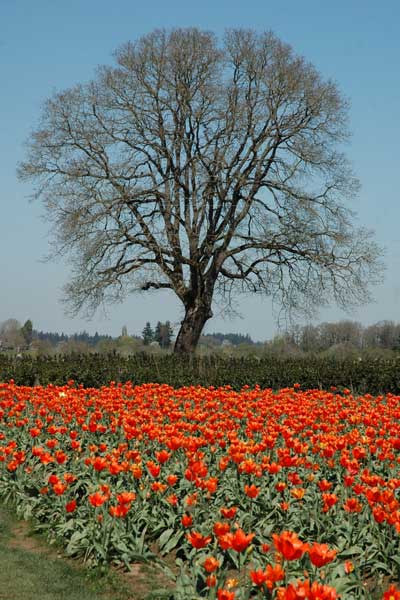 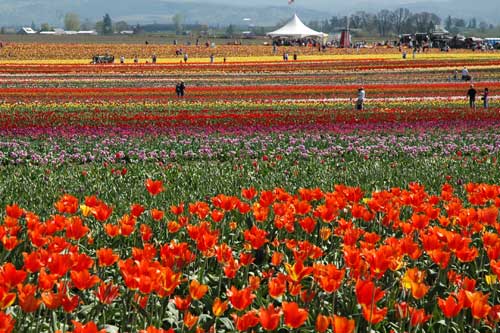 The tulip farm was very crowded. (I saw Karen Kropf.)

In the afternoon, Kris and I were going to visit the rhododendron garden, but we opted to do yard work instead. We made a trip to the hardware store to load up on mulch. Later, she worked in her flower beds while I popped dandelions and then mowed the lawn. Together we tied the blackberry and raspberry canes in bunches, which makes for a much neater presentation. My grapes look awesome. I love all the buds on the vines.

Because it was so beautiful, and because the weather is getting warmer, Kris opened the French doors in the bedroom and latched them down. In theory, they’ll stay open now until October. I say “in theory” because at 2am Saturday morning the rains set in. It rained for eight hours. It’s a wonderful, comforting sound (exactly like the “Hawaiian rain shower” I listen to on my iPod sometimes in order to get to sleep).

On Saturday we got a very early start, running all sorts of errands by noon. We stopped by to see Andrew and Courtney before 9am! Kris and Courtney discussed gardening while Andrew showed me his new Super Deluxe-o-Matic 12″ compound miter saw. I’m not much of a tool guy, but even I had to drool over that machine. (I’m drooling just remembering it.)

It’s been a great weekend so far. Now, early on Sunday morning, the sun is back, and I think we’re going to be able to finish our yard work while keeping dry. I’ll spend most of my day, of course, writing weblog entries for the coming week. It’s been a long time since I was ahead on my writing, but I sense that I can get there today.