Our Bunny (or, An Unexpected Guest)

It looks as if — for now, anyway — we’re not just a five cat family; we’re also a one rabbit family.

On Tuesday, for no apparent reason whatsoever, a rabbit appeared in the yard. We were standing in the kitchen when Kris said, “Look. Meatball is chasing a rabbit.” Sure enough. The big dumb oaf was chasing a white and brown bunny across the grass and into the boxwood hedge.

We went outside and spent several minutes trying to catch the rabbit, but to no avail. It’s got some smooth moves.

Over the past few days, the cats have gone from the aggressors, however, to the pursued. The rabbit has warmed up to them — and to us. It won’t let us pet it, but it does like to hop close to us. And to the cats. In fact, when it sees a cat, it bounds after it, essentially chasing the poor feline. The cats don’t really care for this.

Well, except Silver, one of our new additions. Silver thinks the rabbit is kind of fun: 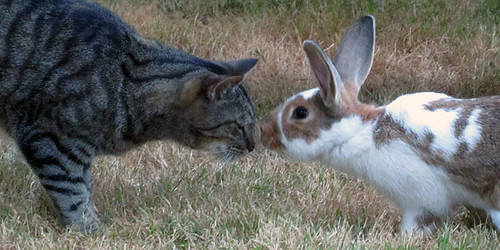 We’re not sure what to do with the rabbit. We’ve asked the neighbors, and nobody is missing a bunny. We asked on the neighborhood email list, and nobody knows anything about it. I guess our next step is to put up signs around our community.

I want to keep the rabbit of course (though outside — I don’t want an indoor rabbit). Kris, naturally, is opposed.

I think she’ll change her mind if we name it, but I’m at a loss as to what to call our little friend. Hazel? Bigwig? Briscoe? Conejo? Stew?