I did a little time traveling yesterday, and I didn’t like it.

“Sounds good,” Kris said. She rarely argues when I have an urge to do some cleaning.

A glimpse at the past 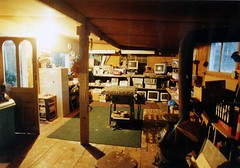 When we first looked at this property five years ago, I was drawn to the outbuildings. I have fond memories of the outbuildings on my grandparents’ land, so I was excited that our new house would have a detached garage, two sheds, and a workshop.

For the first couple of years, I actually used the workshop for its intended purpose. It was the place I practiced my (very limited) handyman skills. I also used it to build computers for family and friends. In time, however, the building fell into disuse; it gradually turned to storage.

I gave a tour of our home to a visitor last month. When I showed the workshop, I was dismayed. I hadn’t really looked at it in months — or years. But when I saw it through the eyes of a stranger, it was clear that it had become a dumping ground for my cast-off Stuff.

The past recaptured
I’ve written before about my battle with Stuff. In many ways, I’ve made great progress. I’m less acquisitive than I used to be, and I’ve sold most of the things that have value. But I still possess a great mass of Stuff.

As I began my cleaning project yesterday, the workshop was packed with:

Looking at this collection of Stuff — none of which I need or use anymore — I was overwhelmed. I felt sick. Did I really purchase all of this Stuff? Why? As I worked, I tried to answer that question.

Whenever I picked something up, I tried to remember how much I had paid for it and what had led me to buy it:

This voice recorder cost $59. I thought it would keep me from forgetting things, but I never remembered to use it. Not once. These photography books cost $20 each. I thought they’d help me make better photos, but I’m not sure I read any of them at all. I bought this old Apple II for $125 off of eBay because I wanted to play the games I remember from fifth and sixth grade. I used it for a couple of hours.

I took a trip through my past, and it wasn’t a pleasant experience. All around me was evidence of my wasteful ways. For nearly 20 years, I had been in acquisition mode. I accumulated Stuff. My workshop was filled with the last remnants of this life.

One fundamental principle of frugality is to buy only things for which you have a use (even if that use is pleasure). The old J.D. wasn’t good at this. I bought a lot of stuff that I didn’t need — and barely wanted.

Now here I am at 40, and when I look at all of the things I own, I can’t help but wonder what my younger self was thinking. Buying this Stuff seemed like a good idea at one time, I know, but owning these things did not make me happy. It didn’t make me feel free. Quite the opposite, in fact. This Stuff is a burden, a physical and a mental barrier to the things that are actually important to me.

A dream of the future
Kris and I are in the very early stages of planning our vacation for next year, and we’re leaning towards a Rick Steves tour. Steves is a one-bag zealot: Participants are not allowed to bring more than a single carry-on suitcase, whether the tour lasts two days — or twenty.

This might seem limiting to some, but I find the one-bag philosophy liberating. When Kris’ parents took us to London and Dublin in 2007, I took a single carry-on bag. For three weeks, my entire world consisted solely of the possessions I could squeeze into this suitcase. It was awesome. I felt unburdened. When we returned from that trip, the one-bag experience prompted me to undergo a short phase during which I purged Stuff around the house — but I never finished the job.

As I continue to develop my personal and financial goals for the future, I want to focus less on Stuff. I’ve learned to guard against the invasion of Stuff, but I want to take it a step further. I want to eliminate more of the Stuff I already own. To that end, I’ve developed some personal guidelines to help me approach the task:

I almost think that this project should make me feel happy and triumphant, not sad and mopey. Look how far I’ve come! Look at the smart choices I’m now able to make! And think of how much less cluttered my life will be once I purge all of this stuff!

I don’t feel triumphant yet, but maybe I’ll get there. For now, I’m hoping that my own experience can serve as an object lesson to others who might be acquisition mode. Buying Stuff (and getting Stuff for free) can seem like fun. It can seem like “winning”. It’s not. Don’t buy things for which you have no use; the value is in the using, not the having.