I was in first grade the first time I can remember anyone asking me what I wanted to be when I grew up. Throughout the year, our parents had come to class to give presentations on their careers. One dad was a fireman. One mom played violin. My mother brought in a food dryer and dried pineapple. Ironically (in retrospect), the presentation I remember most was from a man who worked at the paper mill in Oregon City. He passed around a jar of raw pulp as he described how paper was made. He gave us each a ream to take home.

At the end of the school year, Mrs. Onion asked, “Now that you’ve seen what parents do all day, what do you want to do when you grow up?”

I knew instantly: “I want to be an astronaut.”

For one thing, Steve Austin had been an astronaut. Though his mission had ended in disaster, he did have a bionic arms and legs to show for it. Also, Mr. Spock was an astronaut. Mostly, I wanted to live on the moon.

Throughout my childhood, I was obsessed with living in space. Every year, my teachers told me, “When you grow up, people will live on the moon,” and I believed them. I wanted to live on a space station orbiting the Earth. I wanted to visit Mars.

I devoured science fiction of all sorts, but especially that which portrayed humans living in futuristic societies. The Jetsons weren’t a comedy to me, but an idyllic vision of what might be. Isaac Asimov’s “Lucky Starr” books were keen not because of the mysteries and the robots, but because they posited a society in which people lived on Venus and Mars and the moons of Jupiter. (Not to mention the asteroid pirates — boy! how I wished I could be an asteroid pirate!) As I grew older, reality dealt harsh blow after harsh blow to my dreams of living in space. The rapid astronautical advances of my youth gave way to a relative stagnation of space-related progress. Still, I kept the dream alive by watching and reading whatever stories I could find that involved people living in space: The Black Hole, Outland, Alien. (All three of which are horror films to one degree or another.)

In time, my dreams of living in space faded. There were no more moon landings. The Challenger exploded. Gradually I became aware that my peers were actively hostile to the idea of a space program. (I remember one extended argument with some friends about the value and necessity of space exploration; they believed that NASA should be axed completely.) 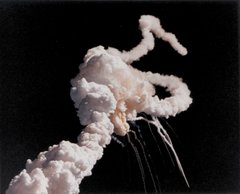 Now that I’m nearing forty, my youthful dreams seem fanciful. I’d dearly love for the space program to expand beyond shuttle missions and space station stays, but it’s unlikely that we’ll put people on the moon again in the next twenty years, let alone on Mars. I continue to consume stories of space colonization (like Kim Stanley Robinson’s wonderful Mars series), but I recognize that our world has become too inwardly focused to dream big anymore. We’re too busy fighting wars. We’re too busy arguing over who should get how much money. We’re too busy consuming. As a society, we have no vision of the future, no vision at all, let alone a vision that includes space travel.

Still, somewhere in the back of my mind, it’s my dream one day to live on the moon.