I’m not one who generally complains about the officiating of sporting events. Referees and officials have a tough job and they take a lot of grief. I’ve seen poorly officiated games both in favor and in opposition of teams I’m supporting. However, this year’s Super Bowl is the second most poorly officiated game I’ve ever seen.

It makes me angry.

#1 At the end of the first quarter, a Matt Hasselbeck touchdown pass to Darrell Jackson was called back due to pass interference. Was there pass interference? Technically yes, but it’s not anything that would ever be called under any other circumstance. The Seahawks settled for a field goal. (Though admittedly, they still had first-and-twenty after the call, so they had plenty of chances.)

#2 At the end of the second quarter, Ben Roethlisberger scored a touchdown on a third-down run. Or did he? 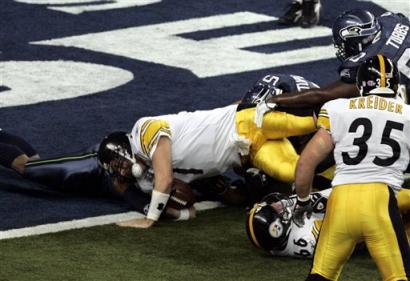 Roethlisberger fell to the ground with football at his side, the ball behind the plane of the goal. Only after he was on the ground did the quarterback whip the ball forward into the end zone. The official made a delayed call: touchdown. The play was subject to automatic review and was left to stand because the replay was “inconclusive”. You know what? If it had been called the other way (no touchdown), the replay would have backed the call, too. Why? Because there was no touchdown! The Steelers ought to have been held to a field goal and the halftime score should have been 7-3 in favor of the Seahawks. (And yes, the Seahawks could have helped the situation by tackling Roethlisberger a foot or a yard back.)

#3 A few minutes into the fourth quarter, Matt Hasselbeck threw an interception. On the return, he was forced to make a woeful quarterback-esque tackle of the defender. Again the official made a delayed call: Hasselbeck was guilty of blocking below the waist. What the…? This one makes no sense at all. The Steelers were given a bonus fifteen yards, fifteen yards that led to a Pittsburgh touchdown. (On a beautiful play, the prettiest play of the game.)

There were several other questionable calls that went against the Seahawks, and the Steelers were given free passes on a few others. I’m not saying that the Seahawks would have won the game, or that they played well (they did for most of the first half, but not so much in the second), but the Steelers’ lead should have only been 17-14 at the end of the game, and the Seahawks should have been playing for the tying field-goal, not trying to accomplish some sort of miracle comeback.

(I’m not the only one who thinks this Super Bowl was poorly officiated.)

For the record: the worst officiated game I’ve ever seen was the 1995 NFC Championship game between Dallas and Green Bay (actually played in 1996). That one was mind-boggling. Over and over and over calls went for Dallas and against Green Bay. Michael Irvin might be throwing a defender to the ground but the penalty would go against the Packers. Green Bay did its best, but ultimately lost 38-27. To this day I complain bitterly to Sabino (a Cowboys fan, and at my side as we watched) about that game.

Call me a conspiracy theorist, but it sometimes seems to me that officials (in all sports) have been given a mandate from their leagues: “Let this team win. It makes a better story.” For example, in the 1995 NFC Championship, I wonder if the officials were not told: “Let the Cowboys win. We want a Dallas-Pittsburgh Super Bowl that hearkens back to the olden days.”

Just wait ’til next year!