The prodigal son returns: J.D. Roth is back at Get Rich Slowly

Note: As of last Thursday, J.D. is once again writing here at GRS. His non-financial writing can still be found at More Than Money.

Hey, everybody. It’s J.D. here. I founded this site, and I wrote and edited the content for many years. Last autumn, I retired from writing here. Today, I’m unretiring — just like a professional athlete.

My role at Get Rich Slowly won’t be nearly as extensive as it once was. Ellen will still serve as editor, for instance, and I’ll have no hand in the day-to-day operation of the site. Instead, I’ll contribute stories about personal finance a few times per month. And, if things go according to plan, I may actually provide a couple of updates per week in which I link to other great personal-finance info around the web. (That used to be a key feature of this site, but it’s fallen by the wayside.)

Today, though, I want to give an update on what I’ve been doing for the past year.

First, for those who don’t know, I founded Get Rich Slowly in 2006. I was deep in debt and trying to learn how to manage my money. I hoped that by sharing my journey, it’d keep me motivated and help others who were in similar trouble.

The site succeeded beyond my wildest dreams. I dug myself out of debt using tried-and-true techniques. Then, as my income from this blog increased, I quit my day job working for the family box factory. I also published Your Money: The Missing Manual, a book about smart money management. Eventually, I sold Get Rich Slowly, though I stuck around as editor for three more years.

Last year, I decided I’d had enough. I felt like I’d written all I could about personal finance, and I’d come to dread the daily grind of producing a blog. (It takes a lot of work to produce a blog like Get Rich Slowly.) So, I retired.

Since then, I’ve been reading and writing, the same as always, but with less focus than in the past. (I’ll explain why in a moment.) I’ve been able to use my new site, More Than Money, to explore a variety of topics, and my pieces about money have mainly gone to Entrepreneur magazine and to the Time website.

Outside work, I’ve continued to pursue Crossfit. Plus, I’ve been dating the same woman for 15 months. Kim and I have had a tons of adventures in our year together, and we’ve worked hard to build a strong, mutually supportive relationship. It’s been a hell of a lot of fun. 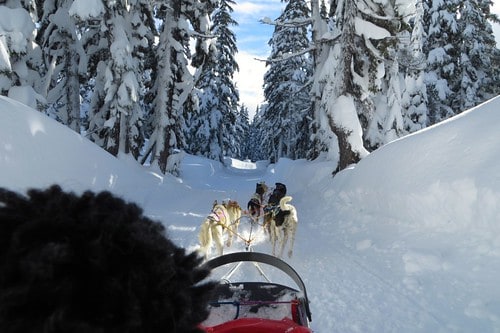 Over Christmas, Kim and I went dogsledding…

Recently, I’ve felt the urge to write about personal finance again. It’s in my blood. For example:

In short, I have more to say about money than I thought I did, so I’m going to write for Get Rich Slowly again. Before I get started, I should update you on a few major changes in my life.

Note: Many folks want to know how Kris is doing. She seems happier than I’ve seen her in a long time. She’s still gardening and canning and frolicking with cats. She’s been dating the same guy for over a year, and he’s even managed to convince her to go camping! (He’s a mechanic for a Mini Cooper shop, and I plan to take my car to him when it needs work.) Kris and I live five miles apart, and have dinner together about once a month. Kim recently loaned her juicer to Kris in exchange for some spicy pickled carrots. Next weekend, we’ll have a joint garage sale.

Last fall, I started seeing a therapist. I didn’t have a goal in mind at first. During the divorce, Kris had asked me to see one, so when a friend told me how useful her psychologist had been, I decided to give it a shot. I wasn’t sure how useful therapy would be for me. In time, though, it became clear that I was wrestling with anxiety issues and a mild case of ADHD.

A few months ago, my counselor decided this “mild case of ADHD” was probably more severe. She suggested I seek medication to help the problem. I was reluctant at first, but after three months of using Vyvanse, I’m a believer. I’m a functional human being again! I’m getting more done every morning than I used to get done in a week. Also, my anxiety has (mostly) vanished. My colleagues have noticed a marked difference, and so has Kim. Best of all, so have I.

I don’t like the idea of medication as a long-term solution, so one of my current projects is to create systems and schedules to keep me on track even when I’m not medicated. I’ve been testing these systems. They work well for a few hours, but by mid-afternoon my mind is a muddle. But I’m confident that with more work and more practice, I’ll need the Vyvanse only occasionally.

Note: My ADHD meds cause one notable side effect: I’m not hungry. When I take the Vyvanse, my appetite goes away. To fight this, I try to eat a big breakfast. But some days — like today — I forget to eat before I start working. When that happens, I can go all day without eating. Then I end up very hungry at night when the medication wears off. 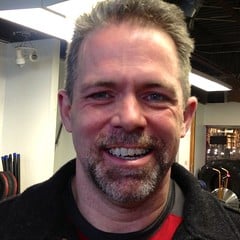 For years, I hemmed and hawed about whether I should get braces. I’ve had some crooked teeth and a wicked crossbite, both of which affected my self-confidence. I could never pull the trigger, though. It seemed silly to get braces simply for the sake of vanity.

Late last year, two things happened. First, my friend Matt (who is just as old as I am) got braces. Second, my dental hygienist girlfriend cleaned my teeth for the first time. “Huh, your teeth really are crooked,” Kim said. “You should see an orthodontist.”

In January, I got braces. I’ll have them for at least two years, but I don’t mind. I already feel more confident. I just wish food wasn’t so eager to get stuck on the brackets…

Note: The braces and the therapy are great, but they’re also expensive. I have health insurance, but it’s catastrophic health insurance, and it doesn’t cover stuff like this. If I’d been smart, I would have taken care of these things long ago, back when I was on Kris’s awesome health insurance. (And I don’t know what I’m going to do about my deviated septum.) Another personal-finance lesson learned.

A Place of My Own

Perhaps the biggest news, on both the personal and the financial fronts, is that I bought a condo. I loved my apartment in northeast Portland — it was close to everything! — but there were many disadvantages to it too.

Last summer, I met Andi Blackwell, who is not only a Portland-based real-estate agent but also a long-time GRS reader. (Andi used to have a financial blog of her own.) Andi and I worked together through the fall to figure out what sort of place I was after. As the real-estate market began to simmer again here in Portland, I found a nice condo in the lovely (and walkable) Sellwood neighborhood. After a short bidding war (ugh), I became a homeowner once again.

I’ve been here eight months now, and I love it. Sure, I miss having a yard, but I don’t miss the yard work. Besides, I live just steps from three wonderful parks, have quick access to a 20-mile multi-use trail, and can walk (or bike) to almost everything I need. Living here has been awesome. The only drawback is that they’re building a new bridge nearby, so sometimes (like now) the whole building shakes.

Because banks are tighter with money than they used to be, and because I barely have an income, I couldn’t qualify for a mortgage. I had to pay cash for this place. That’s put a crimp in my budget (and it pains me to not be able to take advantage of today’s low interest rates), which is helping me to rediscover my frugal side. 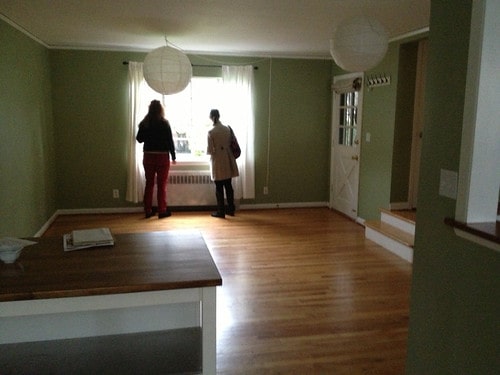 Kim and Andi exploring a condo in northwest Portland…

Though I still have a sizable emergency fund, I depleted a huge chunk of my savings to buy this place. (On the plus side, not having a mortgage keeps my monthly costs low.) Plus, my income is lower than it has been in years.

Kim is feeling pinched too. She’s smart with money. She’d been building her savings so she could replace her 15-year-old car. But she got hit with an unexpected tax bill, had extensive (and expensive) shoulder surgery, and then accompanied me on a three-week trip to Europe. Her savings have taken a hit.

So, this summer has been all about frugal dating. We’ve been exploring fun things we can do for cheap. We love happy hour and shuffleboard at the nearby pubs!

Meanwhile, I’m following my own advice and looking for ways to boost my income. Kim helped me sell my comic book collection (about which more later), I’m going to produce an ebook (about conquering fear), and I’ve started the proposal for my second real book — even though the last book project ended up paying me less than minimum wage. (Writing here won’t help. I’m doing this without pay!)

Professionally, I have a couple of unpaid speaking gigs (again on the subject of conquering fear), and helped to produce the third-annual World Domination Summit.

I have a good life, and I know it. I have a nice home, work I enjoy, a supportive girlfriend, and get to spend plenty of time with my friends. This is the happiest I’ve been in my adult life. And now that my ADHD seems to be under control, I can finally be a productive human being again. That means you’ll see a little more of me around here. It feels good to be back…