Our new home has passed its inspection; the appraisal came in fine; no known financial barriers stand between us and the new place. Because things look sure, we arranged a time to meet with the current owners. This morning, John and Mary Jo (brother and sister) gave us a three-hour tour of the house.

We didn’t get any information on owners from the first half of the century — perhaps our hosts didn’t have that info — but we have plenty from 1959. John and Mary Jo’s parents bought the house in 1959. John was thirteen, Mary Jo was about eight. Their parents lived in the house until they both died four years ago. Since then, Mary Jo has lived in the house, acting as caretaker.

When the family arrived, there was a filbert orchard along one side of the house. There was also a garage and a barn (used for horses, according to John, used for cows, according to Mary Jo). The filberts eventually died (because of ice storms during the 1970s?), and the orchard was cleared for lawn and roses. Jack, their father, loved roses. He was a member of the Portland Royal Rosarians, and the property currently has 134 rose bushes.

Mary Jo and Kris toured the gardens. Mary Jo has been responsible for the garden for the last several years, so she knew the names of just about everything. The are dozens of camellias, a redwood, a cedar, an oak, a spruce, something that may be a sequoia, two pink dogwood, a star magnolia, several holly trees and lots of lilacs, a mimosa, a huge locust, an Empress Tree (Paulownia) a filbert, a glorybower tree, many rhododendrons and azaleas, and manicured boxwood hedges. Winter jasmine, daphne, weigela, peonies, ferns, japanese quince, laurel, skimmia, and what Kris is hoping is a snowball viburnum — the list goes on. There are volunteer locusts and filberts and cedars that will come out to make room for fruit trees, and lots of trimming and pruning that needs to be done.

Jack converted the barn into a workshop. He built a garden shed between the barn and the garage, and added a second storage shed on the other side of the workshop. (We hadn’t even noticed this extra storage shed before today.) Here are some photos of the interior of the workshop, which is maybe ten feet by sixteen feet on the inside: 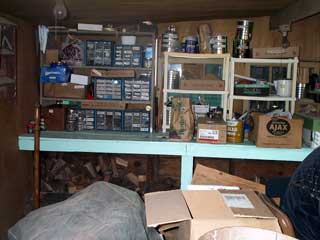 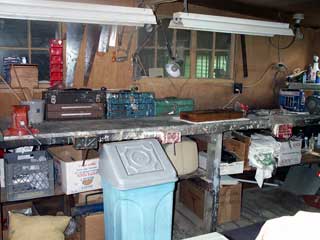 There used to be great chestnut and cherry trees around the house, but many of them have died, leaving only dark green mounds to mark their passing. One large English walnut remains, but it’s nearing the end of its life, too. Fortunately, a volunteer walnut has started on the property, and it may grow big and strong before the old one has to come out.

The previous family hadn’t taken great care of the house, so Jack and his family spent a lot of time fixing it up. The hardwood floors — a type of oak (as you can see from the following photograph, which shows us peeking under the carpet) — were dirty, but in good condition. They may never have been refinished. The current owners have kept carpet of some sort on them for 45 years. Our current plan is to refinish the floors as soon as we get the keys. 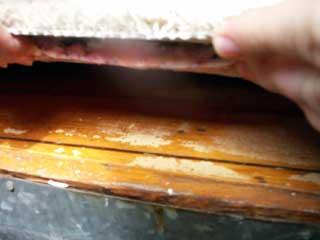 Jack loved windows and light, so he added many of them — including the circular window — to the parlor. His wife loved mirrors, so she mounted them on the wall, creating even more light, and adding a tremendous sense of space to the house. (I told Mary Jo that we’d love to have some of her mirrors, but we understood if she wanted to take them.) Jack liked to work with wood, too, so after he retired, he built tables, and plant stands, and a wagon-wheel light fixture, all out of a lovely maple. (Though the wagon-wheel light fixture is beautiful, we admitted that we wouldn’t keep it, which actually seemed to please Mary Jo. She’ll take it with her.) 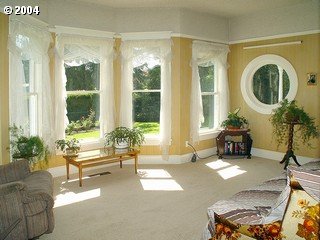 The wallpaper in the parlor and the den — the stuff Kris hates but I love — has been up since at least 1962. It is, at a minimum, 42 years old. We admitted that we plan to take it down and to paint the walls. Mary Jo did not seem offended. She’s unsure whether the walls are plaster or drywall. She knows that many of the walls upstairs are sheetrock, because they’ve only recently been replaced. She thinks the walls downstairs may be sheetrock, also, but this doesn’t seem likely since they exhibit deformities (cracking, etc.) characteristic of plaster.

The gas furnace that we thought we needed to replace imminently, we are now reassured that it will last at least a few more years with little risk. That means more of a budget for the bathroom remodel — still a major priority — the floor project and furnishings.

As we moved from room to room, I measured various spaces, trying to determine whether our appliances and furniture will fit where we want them. The space for the refrigerator, for example, may actually be half an inch too short for our current one. It may have to live in the mud room, and we may have to buy a new one. Our “Haseldorf cabinet” will fit in the kitchen, beneath a set of wall-mounted cabinets. Our second table will fit in the kitchen. Our main table, with all its leaves, will fit in the dining room. Our sideboad will fit there, too. The mahogany ball & claw-foot desk we purchased on Friday will reside in the den’s nook. Several bookshelves will fit in the den, and in the parlor. Our old hi-fi will probably fit in the den.

The big question is how much we can fit up the stairway. Mary Jo assures us that they’ve managed to get large pieces of furniture upstairs in the past; queen-sized mattresses are a tight fit, but they do go up the stairs. We’re still worried, though.

John and Mary Jo believe the house is in the Gothic revival style of architecture (though I remain unconvinced), which was popular during the latter part of the nineteenth century. Also, once when they were doing work in the walls, they found a newspaper from 1889 (according to John — 1887 according to Mary Jo). Because of these two facts, and because of the age of the materials in the house, the current owners believe the house was built around 1890. No official records actually exist on the construction of the house. The earliest records show that the house exists in 1903, but they’re not convinced this is the actual date of construction.

John and Mary Jo were wonderful hosts, and they took obvious pride in showing us their childhood home. We hope to do them proud, to maintain its glory for many years to come.

Each time we go to the house, we love it even more. It’s perfect for us.

Bring on the projects!

(Thanks to my co-writer and wife, Kris Gates, who really ought to have her own weblog, eh?)

Wow. If I can ever get back to Oregon, I hope you will let me drop by to see the new place. (Do you have a name for it yet?)
I have lived in Las Vegas for six years now, and have almost forgotten about gardens, roses and rhododendrons. I miss the sights and smells.
Here in the desert, we have a water district that pays you to rip out your lawns and install xerascape (rocks with a few drought tolerant plants). Such is the price you pay for 360 days of sunshine per year.
Congradulations on jumping through the hoops necessary to purchase the house!

It is amazing that the wallpaper can be 40 year old! It seems strange that it was never redone. But I guess that Grandma’s downstairs bathroom has had the same wall paper me whole life.

On your behalf, I went to the Oregon Historical Society website to try and find an old photo of your estate, but to no avail … I couldn’t remember the name of the original builder/owner. Isn’t it something like Guernsey? In any case, I found the online photograph catalog extremely user friendly, just for your information …

I’m impatiently waiting for you to get settled in so I can see the place! I wish I’d had time on either of my trips to Canby this weekend to stop in and talk with you about the house and the move. It all seems very thrilling, for those of us living vicariously.

You will have to keep a lookout for old artifacts as you remodel — maybe you will qualify for HGTV’s “If Walls Could Talk.” 🙂 What a neat project this is for you both! I’m wondering if you have had the inspection on the house you have are selling and how that end of the process is going.

Ack — I’m not sure how that extra “have” got in there; it should read “the house you are selling.”