Kris is crazy. She’s crazy for tomatoes. Here we are, in the coldest darkest corner of the year, and she’s conspiring with her cronies to order tomatoes. She’s itching to get them planted. She feels like she’s running late.

With Craig and Amy Jo, she buys specialty seeds from an outfit called Totally Tomatoes. This year the three of them ordered:

Kris just spent $25 on tomato seeds (which will work out to less than $1.50/plant between the three). She also spent $60 for a set of five super-deluxe tomato ladders. “If they work, I’ll get five more,” she told me. “I’m hoping that these will prevent some of the tomato crises we had last year.” (I’m hoping they will, too. Tomato crises are, well, crises. And of major proportions.)

Soon our parlor will be a mass of growlights, potting soil, and plants. Nosey law-enforcement could be forgiven for suspecting she was growing pot. She’s not. It’s just tomatoes.

But so are her friends. Witness Amy Jo:

I finally opened one of the jars of roasted Black Tula tomato sauce last week…oh, my, yum. Paul isn’t much of fan of typical tomato sauces but this one is meaty and smoky, perfect for hearty pasta dishes…

You can count me out of the Raad Red, my tomato roster is full, full, full. I’ll try any pepper though, I actually had some success with them last year.

Albert and I have been spending 1/2 hour each evening in the attic setting up the grow lights and plant shelves. The urge to grow stuff is hitting me early this year.

These e-mails were intercepted and used without permission, which may get me into trouble with the tomato fanatics. I’ll take my chances. Lisa’s aware of the madness, too. When I smiled knowingly at these poor souls via e-mail, she replied:

There’s a long list of tomato varieties on our kitchen counter even
as I type.

She snapped this photo of Craig and Albert planting early seeds: 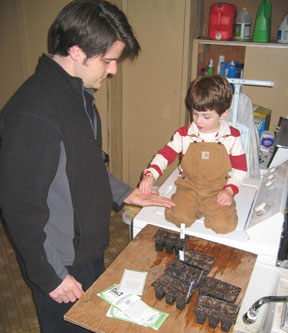 This morning I was razzing Kris again about her tomato fixation. She became indignant. “You don’t know,” she said. “People are jealous of our tomatoes.”

“Don’t you dare,” she said. “Remember: I have veto privileges. If you post that you may lose your rights to write about me.” I laughed again, but she was serious. (I’m taking a risk by posting this, obviously — I believe it’s for the greater good.)

We talked some more about tomatoes and her exclusive tomato club. “How come Rhonda’s not in it?” I asked. She buys starts. “And Jenn?” Starts again. Plus kids. “Pam?” More starts. And a kid (with another coming). And too far away.

Kris turned to me. “Tomatoes are not toys,” she said, in a tone that indicated children precluded sensible parents from growing tomatoes from seed. (Except for Craig, apparently. But then Craig is Craig, and he could grow tomatoes from seed even if he had a dozen children.)

Maybe she should start a tomato blog. 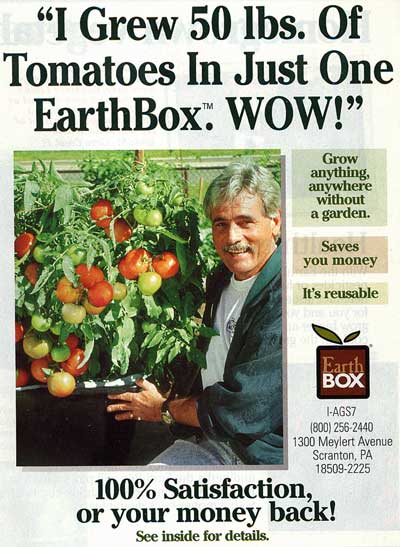