On 01 May 1994, Colors — the Custom Box Service shop cat — gave birth to a litter of kittens. I found them tucked in a corner of the paint room when they were just a few hours old. Because Colors seemed to consider me her “boyfriend”, she allowed me to touch the tiny, fragile babies. 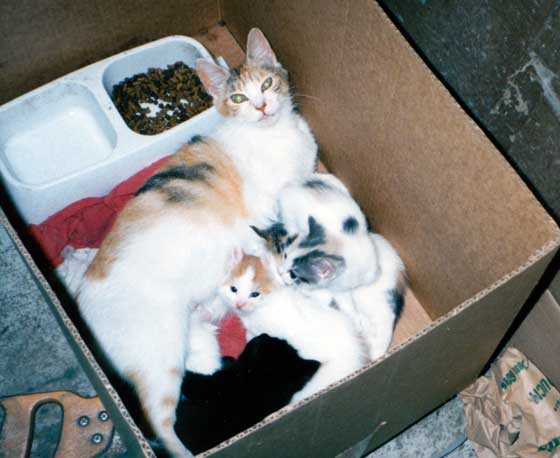 Over the next few weeks, the kittens grew into explosive bundles of fur. One of the kittens, the black one, we named Shredder because he was always attacking things and trying to tear them apart.

About this time, Kris and I bought our first house. We made an offer, had it accepted, and prepared to close on 23 June 1994. On June 21st, on a whim, I brought the entire litter of kittens to spend the night in our apartment. Kris’ cat, Tintin, was taken aback by the little balls of fur; the kittens just ran and played. Well, except for Shredder. Shredder was more fascinated by the baked potato Kris was eating for dinner. When Kris’ back was turned, Shredder grabbed the peel and tried to run off with it. 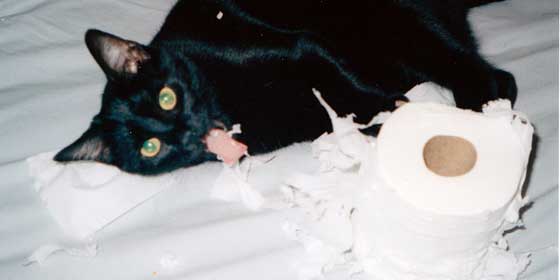 For a long time, Toto lived up to her original name, Shredder

Kris was reluctant, but agreed. So, when we moved into our new home a couple of days later, Shredder came to live with us. And about this time, we figured out Shredder was a she. She and Tintin spent the entire first day hiding in the back of the cupboard under the bathroom sink.

We decided we didn’t like the name Shredder, but couldn’t come up with anything better. It was Kris’ sister, Tiffany, who hit upon the name Toto, and it stuck. 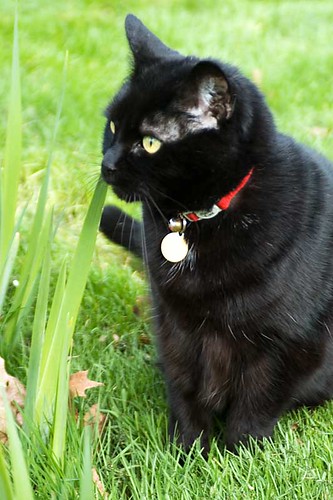 For the next seven years, the four of us — Tintin, Toto, Kris, and J.D. — lived happily in the Canby house. Tintin and Toto got along great. They never really snuggled, as some cats will, but they hung out together, and they played together. Toto loved curling up in a bowl on the kitchen table. She also loved Outside. She was a fearsome hunter, often bringing in birds for us to see. 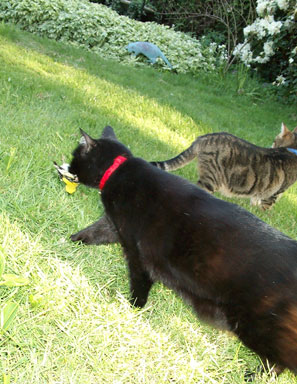 Toto used to be hell on goldfinches

Once, while we were watching the Summer Olympics (in 1996?), Toto brought a live bird into the living room and released it. It scared the hell out of me. I was eating a bowl of brothy soup, which I promptly spilled all over my lap. The poor, bloody bird kept trying to fly up through the ceiling. It left a series of red marks on the paint before we were able to capture and release it. Toto was very, very proud.

Though she was fond of birds, Toto loved nothing more than a delicious complex carbohydrate. Especially if she could share it with Kris. She was always begging for baked potatoes, bagels with cream cheese, and — her favorite — corn on the cob. She also loved tuna fish. She and Kris were a dangerous pair. Kris would often leave half-full glasses of water sitting around; Toto would tip them over and drink the spill. (This continued Toto’s entire life.) If you’ve ever wondered why our dining-room table looks so distressed, it’s because of Kris and Toto and their glasses of water. 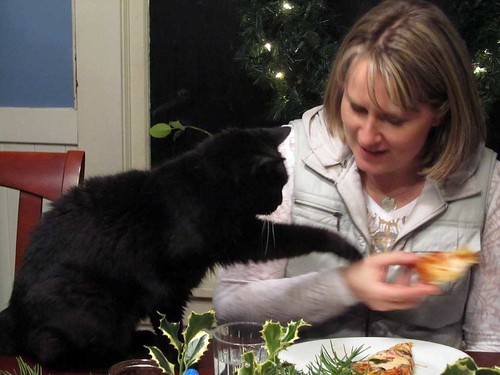 Toto was scared of few things in life. She was the Boss. But she had an irrational fear of bananas. No joke. If you held a banana to her, she would cower from it and hiss. I have no idea why.

In 2001, Toto’s best friend died. Tintin faded from diabetes and had to be put down in the fall. Toto never understood this, and she seemed to lose a part of herself once Tintin was gone. Though we acquired new cats — Satchel, Simon, Nemo, and Max — she never befriended them. (She hated Satchel and Nemo, had an uneasy truce with Simon, and tolerated Max, that lovable lug.) She always seemed to pine for Tintin.

When we moved to our new house in 2004, Toto didn’t adjust well. Whereas she used to love Outside, she now spent most of her time indoors. After just a few weeks here, we went on a cruise to Alaska with Kris’ parents. My cousin Nick acted as housesitter and cat caretaker. While we were gone, Toto had a veterinary crisis. She suffered from heat stroke, or something like it, and almost died.

After that, she was never quite the same. She had always been a bit of a grouch, but now her attitude was that of a constant crank. She growled and hissed and wasn’t very social. But I loved her anyhow. 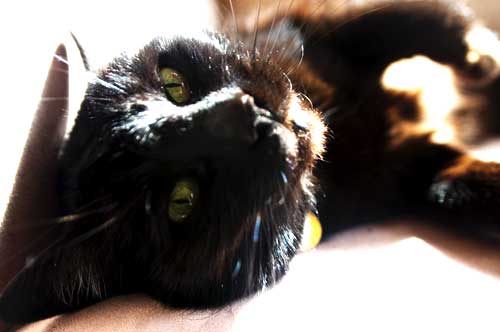 In fact, I loved Toto more than I’ve ever loved an animal. I knew her from the day she was born. She and I had a sort of bond that I haven’t even experienced with another human, not even Kris. We seemed to understand each other. For much of the past seventeen years, she was my constant companion. When I was working from home, she was always by my side. When I ate dinner, she sat next to me, waiting for her turn at the plate. She may not have been friendly to others — especially Aunt Pam — but she loved me, and I loved her. 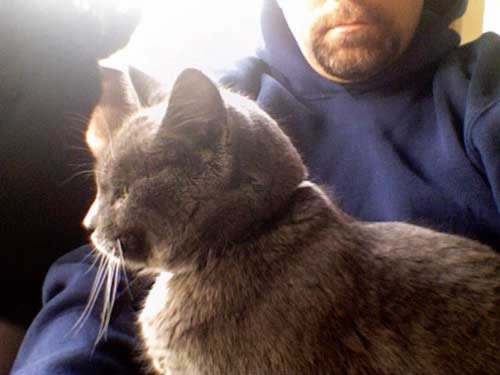 Toto and Max, helping me write about money

Last summer, Toto started showing signs that she was getting old. She had trouble getting around. She couldn’t jump as well as she used to. She started missing the litterbox — she couldn’t squat when she peed. So, we banished her Outside. She complained at first, but gradually learned to love it. In fact, it was like she had forgotten about Outside when we moved, but was now remembering all of its many charms. 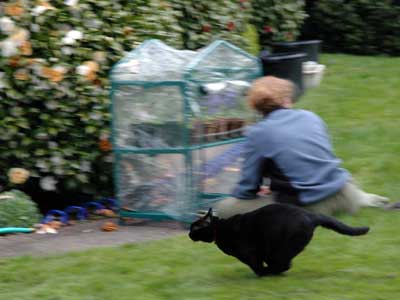 Toto used to be an active cat

When the cold set in, she was less content to be Outside, though. But we couldn’t have her inside all the time, because she was peeing outside the litterbox. We compromised. She could be inside while we were home, but had to stay Outside when we were away (or asleep). We rigged up a box with a heating pad, which she seemed to like, though she preferred to sit on Kris’ computer…

What Toto loved, though, was the wicker basket that Kris gave her. We put a heating pad on the bottom of that, too, and set it on the kitchen floor. That’s where Toto lived from the time we returned from France in late October until just this morning.

Toto on the porch with her raccoon friends

Last night, I notice that Toto was lethargic. Also, she wouldn’t purr, even when I petted her in the sure-fire spots (like her chest — she loved to have her chest stroked). She didn’t want to lay down. She simply sat upright in her basket, staring ahead. She looked like she felt sick. Though I’d spent months trying to deny the inevitable, even I had to admit: Her time had come.

Toto, remembering she loves Outside

This morning, I let Toto in from the front porch. She meowed and begged for food, just like always. I gave her some fresh water, some dry food, and her favorite flavor of wet food (Ocean Whitefish and Tuna). I sat at the dining-room table to do some work while she ate. When she finished, she hopped up on a chair, and then onto the table. But she grunted and growled as she did so. It hurt her. She came up to me by the computer and rubbed her head against me. I petted her, and she purred. But only for a little bit. Then she just sat there, letting me rub her, but not purring. Then she hopped down and curled up in her basket. 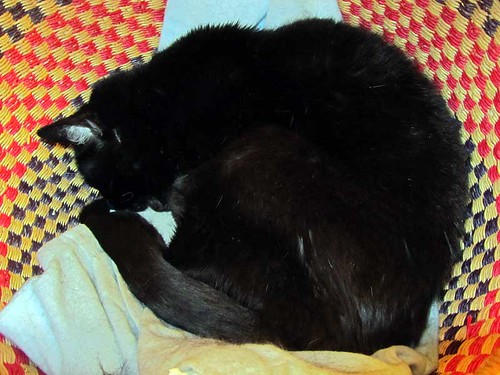 It hurt me more than I can express, but I unplugged the heating pad and curled the cord next to her, picked up the basket, and carried it to the car. I drove her to the vet. Toto didn’t put up her usual fuss, though at one point she looked at the car ceiling and let out a yowl. At 9:10am, I sat with her and cried (oh, how I cried) as the vet put her to sleep.

And then I came home and buried my baby girl. 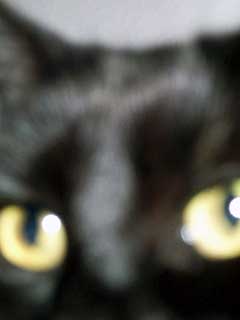 Toto Gates, 01 May 1994 – 05 February 2011
Footnote: As choked up as I am by this, here’s a hilarious postscript. Just 30 minutes after they’d put her to sleep, the automated update system from the vet sent me a reminder to schedule Toto’s “senior comprehensive wellness exam”.