Our trip to Belize began at 3:30 last Saturday morning. We crawled out of bed, grabbed our bags, and groggily made our way to the airport. Our travel — a 3.5-hour flight to Houston, a 2-hour layover, and a 2.5-hour flight to Belize City — was uneventful. Just the way we like it.

Note: I used to be an over-packer. When I flew, I’d check a large suitcase stuffed with clothes, as well as a carry-on and a daybag — even for weekend trips. No longer. I made this trip with just a carry-on and a daybag, and even that felt like too much. Next time, I’ll pack even less. (Though I will remember to bring a t-shirt or two.)

My first clue to Belize’s character came at Philip Goldson International Airport in Ladyville, 11 miles northwest of Belize City. Walking from the tarmac into the airport is like walking back in time; I immediately though of the grade school I attended in 1975: the wood desks and doors, the linoleum floors, the lack of most modern technology.

And immigration was perfunctory, at best. The officers who processed our passports were so busy chatting about their weekend plans that they hardly gave us a glance. It took Kris longer to use the washroom than it took for us to make it through immigration and customs!

By far our biggest adventure of the day was the drive from Belize City (or Ladyville) to San Ignacio (and the Black Rock Lodge). We were picked up at the airport by the amiable John, who drove us the two-plus hours to our accommodations. 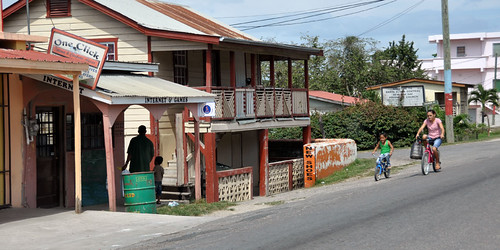 It’s difficult to convey what the roadside is like in Belize, but I’ll try.

If you’ve ever seen how folks drive in India (on The Amazing Race, for instance), then you have an idea of what the roads in Belize are like — though admittedly on a much much smaller scale. We drove on the Great Western Highway, which, despite the name, is a standard two-lane road like you’d see in the Oregon or Washington countryside. (Much of the drive reminded me of going from Estacada to Salem by way of Molalla and Silverton.)

Traffic is chaotic. Vehicles travel at wildly different speeds: Some loaded lorries were crawling at 20 kph; our driver preferred 100 kph. Motorcycles weave in and out of traffic, passing on the left or right. And the roadside is filled with bicycle and pedestrian traffic. Many of the pedestrians are hitching a ride, just like the U.S. in 1975. So, the beds of many pickups were filled with two, five, or six passengers, just like the U.S. in 1975. 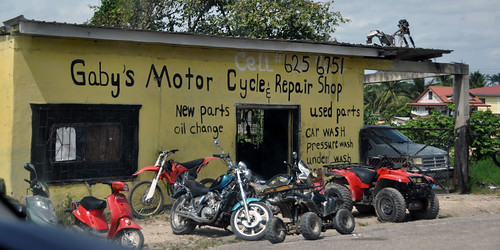 The Great Western Highway is filled with bus stops; the buses themselves are often old and rickety. (In fact, we saw a couple of shattered and abandoned bus hulks by the side of the road.) But through this chaos, order emerges. Drivers and cyclists and pedestrians are all keenly aware of each other. Maybe it’s just because traffic is relatively light, but I never felt unsafe.

After about ninety minutes of driving — first through swampy land, then through savannah, and then through jungle — we reached the twin cities of Santa Elena and San Ignacio, which are divided by the Macal River. As we drove through town, John honked and waved at people. They waved back. “That’s my little daughter,” he said, waving at a seven-year-old girl in a pink dress. She was standing alone outside a store. 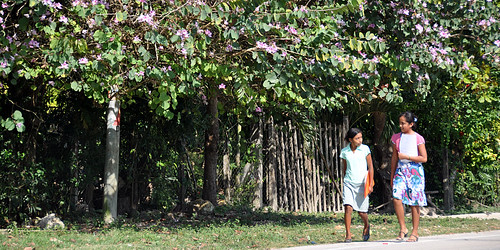 Note: I loved how independent children seemed to be in Belize. Everywhere we went, kids from six to sixteen walked and talked and played without adult supervision, either alone or in groups. Yet another way the country reminded me of the U.S. circa 1975.

The final approach to Black Rock Lodge is over a washboarded gravel road six miles long. In some places, the potholes are so large that John drove on the shoulder to avoid them.

“What’s this orchard?” I asked John as the headlights revealed a grove of flowering trees. John stopped the truck and rolled down the windows. After two hours of air conditioning, we were swamped by warm and sticky air, and by a heavy, sweet scent. “Those are orange blossoms,” John told us. “It’s one of my favorite smells.” And now one of mine, too.

We reached the resort just in time for dinner. Dinner at Black Rock Lodge is served family style — you sit at one long table with all of the other guests, and the staff serves you each in turn. (Your only options or “meat” or “veg”; other than that, everyone has the same meal.)

“Hi,” said the fellow sitting next to me. “My name is John and I’m from Oregon.”

I laughed again. “We live just across the river from you, in Oak Grove.”

John motioned to the couple across the table from him. “This is Beth and this is another John. They’re from Tigard.” 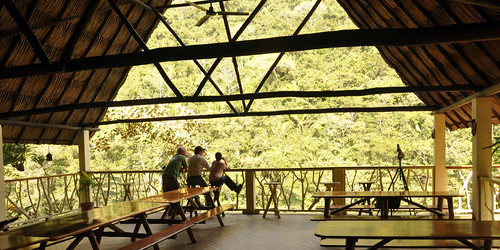 So, we’d traveled all day and covered thousands of miles to sit down for dinner with virtual neighbors. (Another strange coincidence: The music playing in the background as we ate was obscure 1980s “alternative” stuff, such as Opus and Marillion and Echo and the Bunnymen. In other words, the stuff I listen to every day.)

After a long day of travel, we went to sleep early. Kris put in her earplugs so my snoring wouldn’t keep her awake. I stayed up, lying in bed, listening to the sounds of the jungle.