Belize is humid. Humid humid humid. Like Minnesota in August humid. By 9am, you’re hot and sticky, and you’d better get used to it because it’s going to be that way for the rest of the day. You (and everyone around you) are going to be stinky and sweaty until after nightfall.

How humid is it? The cover of my Belize guidebook curled overnight. The pages of my journal are soft and moist to the touch. All of my clothes feel like they came out of the dryer ten minutes early. And the floor of our cabin is always slick with moisture, like somebody mopped but didn’t dry.

Survival of the Fittest
We woke to find a katydid in the cabana, clinging to the curtains. 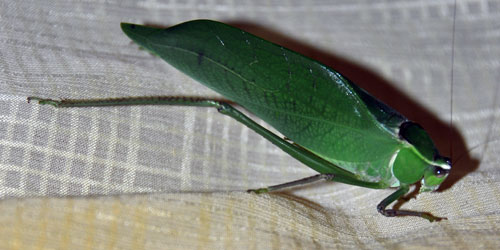 Kris immediately named it Katy. “I wonder how Katy got in here,” I said. “Because if she can make it inside, then surely the mosquitos can, too.”

“Let’s put Katy outside,” Kris said. “She doesn’t want to be in our cabin.” She spent a couple of minutes trying to herd the frightened bug out the door. “I think she’s hurt,” Kris said. “See how she can’t walk very well?” We left Katy to fend for herself and walked up to the lodge to have breakfast.

We ate with Tim and Shana (Shayna?), two doctors from Philadelphia. Tim is a radiation oncologist and Shana is in the sixth year of an eight-year residency for colo-rectal surgery. Kris and I thought both were smart and funny, and enjoyed our chats with them over the next couple of days.

After breakfast, we sat on our porch, putting on sunscreen and bug spray. “Oops. Katy’s leaving,” I said. “She’s scared of that bird.” I pointed to a white-collared manakin.

“There she is,” I said. “As long as she doesn’t move, she looks like a leaf on the floor of the forest.”

“She sure does,” said Kris. And at that moment, Katy took flight, a broad green butterfly wobbling through the air. “Ooh…look at that,” Kris said.

“I hope she —” I started to say, but at that moment, a smallish bird swooped from a nearby tree and snatched Katy away in his mouth. And that was the end of Katy the katydid, killed by my wife, who was trying to save her.

Note: Later in the week, we learned that if a katydid is in your cabin, it’s near death, anyhow. So if Kris and her bird friend hadn’t killed her, she would have died soon, anyhow.

Vaca Falls
Following Katy’s unfortunate demise, we decided to hike around the lodge to get a feel for the place. We looked at the birds and the trees. Kris made friends with the dozen horses that roam the property: 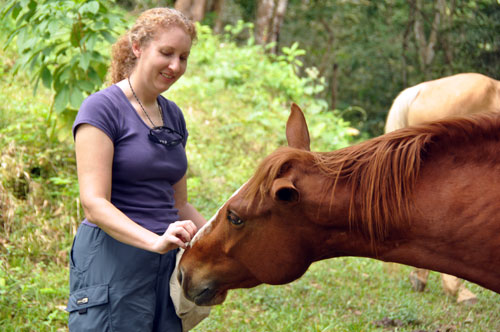 Eventually, we made the 1.5-mile hike from the lodge to Vaca Falls. As we walked, I was again reminded of rural Oregon during the mid 1970s. I was just a boy then, but I remember walking in my grandfather’s woods, and scrambling across the countryside with my friends. I had the same feeling now.

As we followed a dirt road above the Macal River, we looked at the strange vegetation and watched for critters that were new to us. We saw lots of termite nests like this one: 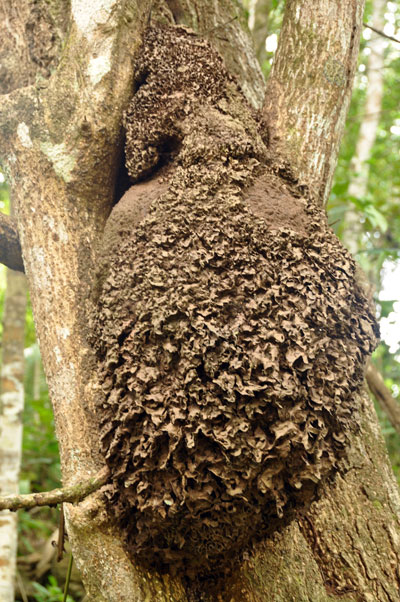 Eventually, we reached Vaca Falls, where a couple of men were fishing: 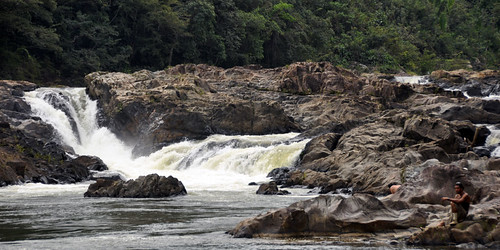 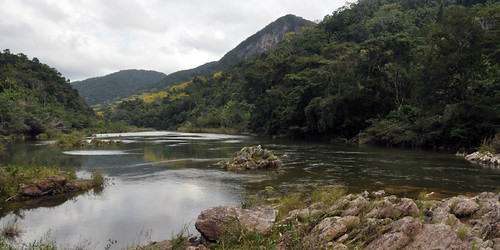 After enjoying the scenery, we strolled back to the lodge.

About Belize
Belize has a colorful history. Originally home to the Mayan culture, it has at various times drawn its population from Spanish Conquistadors, British pirates, African slaves, Confederate refugees following the U.S. Civil War (no joke!), and immigrants from neighboring Guatemala and Honduras. The United States may be a melting pot, but Belize is a chunky stew.

Formerly known as British Honduras, the country changed its name to Belize in 1973 and became independent from the U.K. in 1981 (though there’s still a strong cultural connection, and British troops are stationed in the country). Political and cultural conflicts with Guatemala bubble beneath the surface. Guatemala stakes a claim to Belize, though it did recognize it as a sovereign nation in 1991.

Belize has a population of 321,000, including several thousand Mennonites. (The Mennonites provide most of the country’s chicken, eggs, and dairy products.) Though there are many Spanish speakers, the official language of Belize is English, and most people speak it. (Nearly everyone we met was bilingual.)

In the afternoon, we did what we’d traveled to Belize for: We relaxed. I climbed in the hammock, smoked my pipe, and did a little reading and writing. Kris joined me on the porch. Ostensibly, she was reading, but really she was watching the wildlife, describing every bird she saw. Life was good. 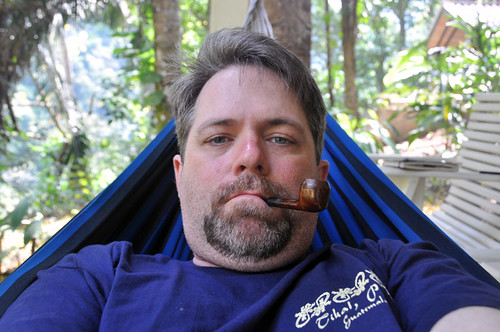 Still Waters Run Deep
Did I mention that Belize is humid? By 4pm, I was a sticky, stinky mess. Kris, John H., and I were on the deck overlooking the river when three collared aracari alighted in the nearby plantain trees. John and I scrabbled around on the deck to get good photos. As I did, my own body odor practically knocked me out.

“Wanna swim in the river?” Kris asked after the excitement was over.

“You bet,” I said. We changed and walked down to the shore.

Though the water wasn’t cold (maybe 15 or 16 centigrade), I was a pansy and inched my way in; I wouldn’t dive. But once I was in, I splashed around and had fun. I swam for a black rock about 25 feet away.

Right away, I knew I was in trouble. The current was swift, and I had to swim as hard as I could against it (which admittedly isn’t very hard) in order to stay in one place. Eventually I reached the black rock.

“That’s a perfect demonstration of vector dynamics,” Kris called from the shore.

The prudent thing at this point would have been to return the way I’d come. But since when have I been prudent? I decided to be bold and adventurous and swim for a sandy clearing on the far shore. Immediately after letting go of the black rock, I knew that I had no chance. The current swept me downstream.

I changed tack. Spying a huge rock formation a little further on, I turned back the way I’d come and let the current carry me to safety. I paused, held to the rock by the rushing water. I was still 25 feet from Kris and there was a lot of river between us.

Based on the way the water bubbled and rolled, I knew there were plenty of rocks just below the surface. But I also saw another giant rock formation just downstream. I steeled my courage and made for it, careful to watch for sunken boulders.

At this second rock formation, things were both much scarier — and less so. I could see that just beyond this outcropping, the river broadened and calmed, so that was good. But the rock itself was dangerous. The swift current had eaten away its base, so that while there was lots of rock on top, there was nothing but an inward-sloping craggy curve below the water. It would be all too easy to get sucked under.

I s-l-o-w-l-y made my way around the rock formation, pushed off, and swam for the sandy shore. Within a minute, I was safe, and I’d formed a new resolve to respect the water. 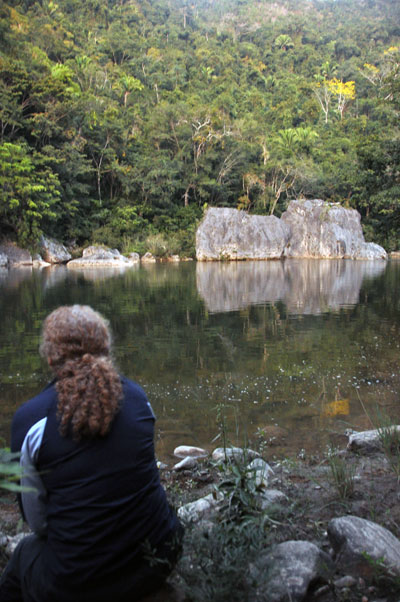