With rare exceptions, I’m not a fan the horror genre. It’s a little too real for my tastes. Still, now and then, a little horror can be fun.

This year, Jennifer threw a late party for Kim’s 40th birthday. Because we held the event at the end of October, naturally she chose a funerary theme. For instance, she rented a hearse to transport Kim and me to the celebration: 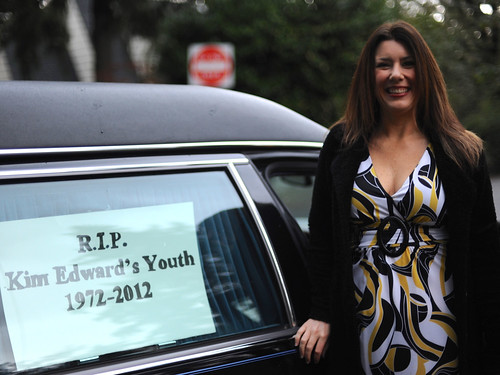 Brett and Vicki gave us (sort of) spooky masks: 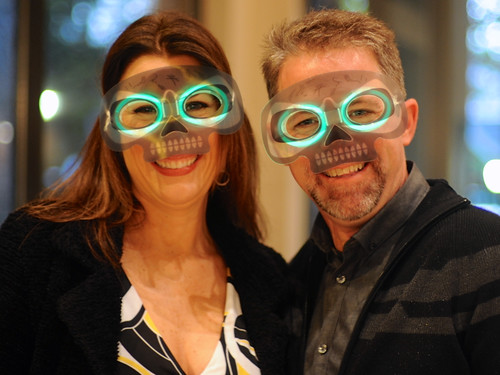 And, of course, the cake (a “rice krispie cake”) was shaped like a tombstone: 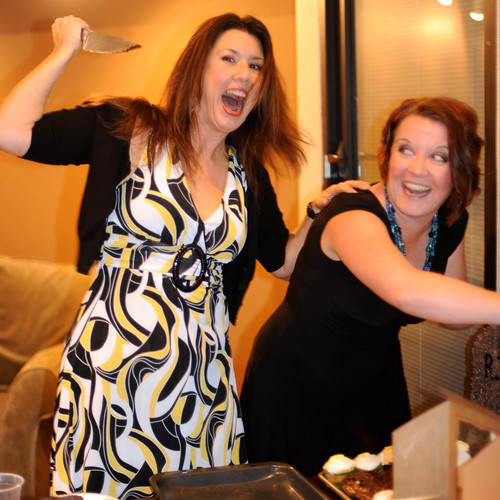 Last weekend, we joined a couple of dozen other folks to play along in the gym’s second-annual “zombie apocalypse” game. The game involved lots of running for us humans, but the zombies didn’t get much of a workout. I think the zombies had more fun, though. Take a look at Kyra and Kim’s makeup: 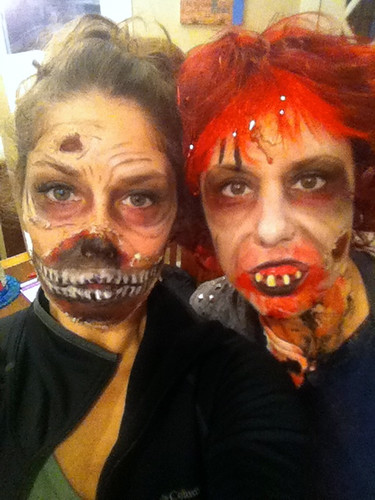 Kim and Kyra vowed that they were going to “kill” me during the game. I vowed they weren’t. Ultimately, however, Kyra prevailed and I was forced to join the walking dead…

All of this is prelude to the following: Although I’m not a fan of the horror genre in general, I do like ghost stories. Ghost stories are great fun. I like complex novel-length ghost stories (like Wilkie Collins’ wonderful classic, The Woman in White) and I like short, simple ghost stories — like “The Velvet Ribbon”.

When I was a boy, my sister Shelley had “The Velvet Ribbon” on vinyl record. It scared the hell out of me, but I listened to the story over and over. A few years ago, one of my readers sent me an mp3 file of the story. And now, in the age of YouTube, somebody has posted the story online:

If you’d rather read than listen, here’s a text version of the story:

The Velvet Ribbon
by Ann McGovern

Once there was a man who fell in love with a beautiful girl. And before the next full moon rose in the sky, they were wed.

To please her husband, the young wife wore a different gown each night. Sometimes she was dressed in yellow; other nights she wore red or blue or white. And she always wore a black velvet ribbon around her slender neck.

Day and night she wore that ribbon, and it was not long before her husband’s curiosity got the better of him.

“Why do you always wear that ribbon?” he asked. She smiled a strange smile and said not a word. At last her husband got angry. And one night he shouted at his bride. “Take that ribbon off! I’m tired of looking at it.”

A week passed. The husband no longer looked into his wife’s eyes. He could only stare at that black velvet ribbon around her neck.

One night as his wife lay sleeping, he tiptoed to her sewing basket. He took out a pair of scissors. Quickly and quietly, careful not to awaken her, he bent over his wife’s bed and

went the scissors, and the velvet ribbon fell to the floor. And

off came her head.

It rolled over the floor in the moonlight, wailing tearfully: “I…told…you…you’d…be…s-o-r-r-y!”

Tonight, I’ll be doing decidedly non-Halloween stuff. If it’s autumn, it must be time to plan next year’s World Domination Summit. The action team will be gathering at WDS HQ to discuss speakers, venues, and more. But when I get home, I’ll spend an hour or so reading ghost stories. Any recommendations?