Nick and I have been in Cappadocia for 48 hours. It’s awesome.

Cappadocia is a region in central Turkey, high on a 1000-meter plateau (much like the great African plateau). It’s a place filled with strange geologic formations, including the famous fairy chimneys (or hoodoos). Many of the canyons and hillsides contain hundreds-of-year-old churches (or even cities) carved into the rock by the former inhabitants. And Cappadocia itself is a Persian name meaning “land of the beautiful horses”.

Nick and I are staying nearly a week in Cappadocia. We reached Göreme by bus on Saturday afternoon and spent the rest of the day getting acclimated to our surroundings. We walked around the town, and then followed some of the trails on the surrounding hillsides. 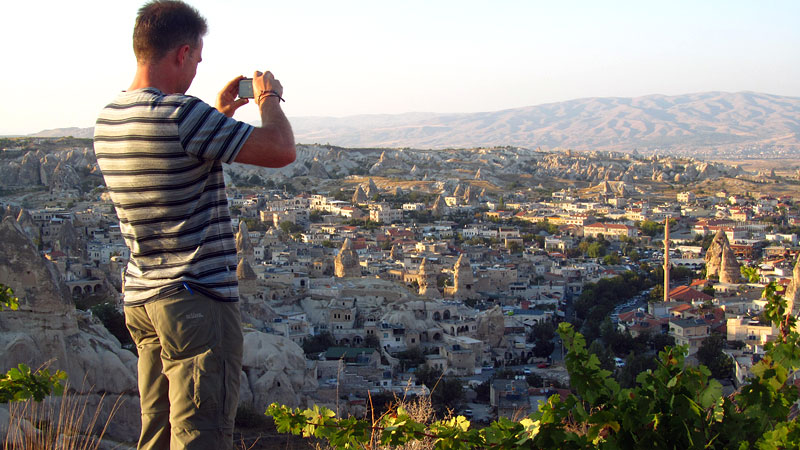 Nick photographing me snapping a photo (with Göreme in the background)

We paused for a few minutes to watch the sunset. From a bluff overlooking the town, I joined other tourists to take photos of the valley below. 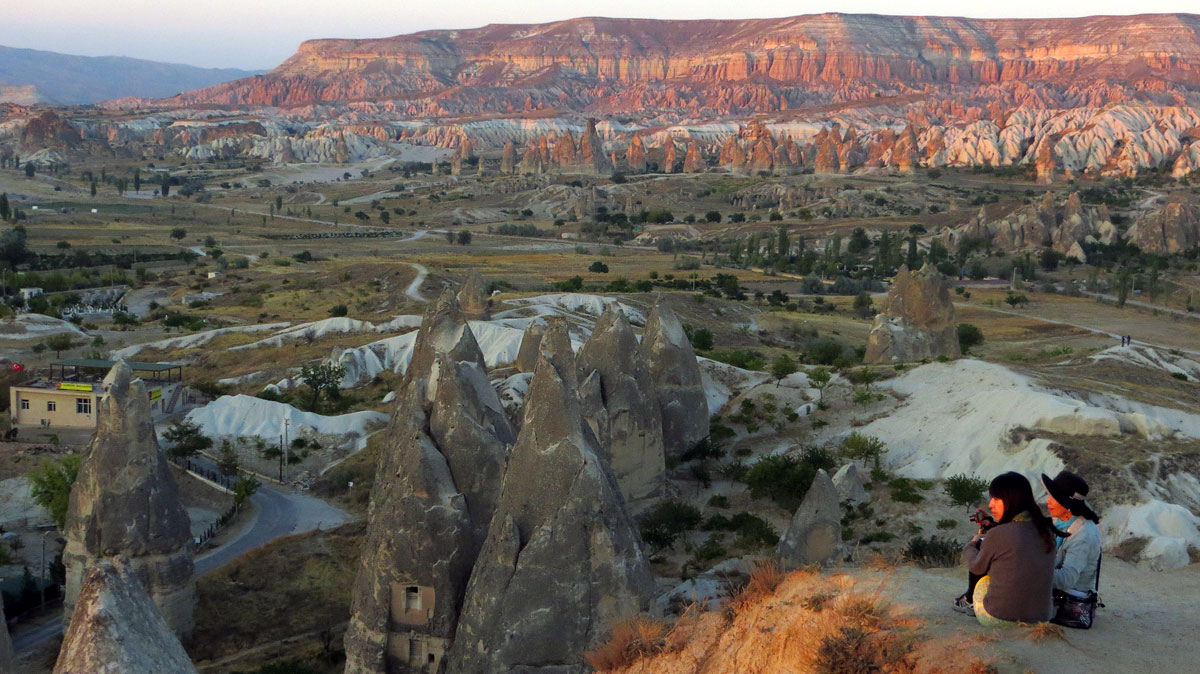 On Sunday morning, Nick and I hopped a dolmuş to the nearby town of Çavuşin. From there, we hiked into rose valley to explore the rocks and the ruins.

As we left the city limits, we were joined by one of the many dogs who were wandering the street. This dog stayed with us for about five kilometers (three miles) before being scared off by a bigger dog. He became our guide, and was actually quite loyal to me for the two hours he was with us. I liked it. Plus, we’d lose the trail at times; when that happened, the dog would walk on ahead a ways, and then turn to tell us to follow him. He was like a personal guide. 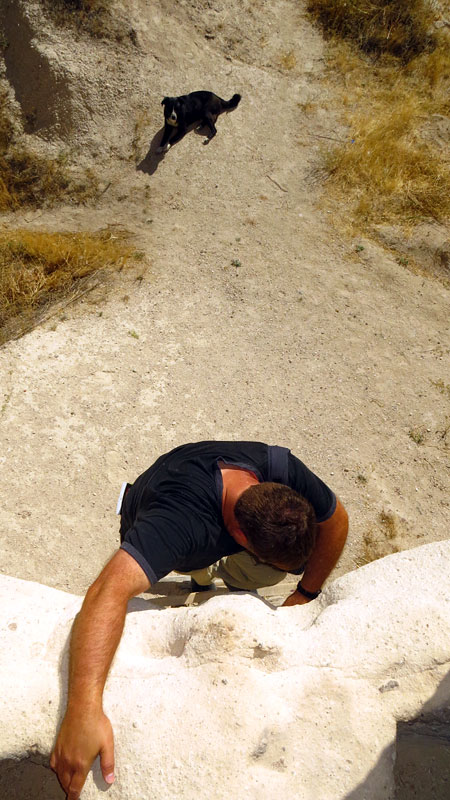 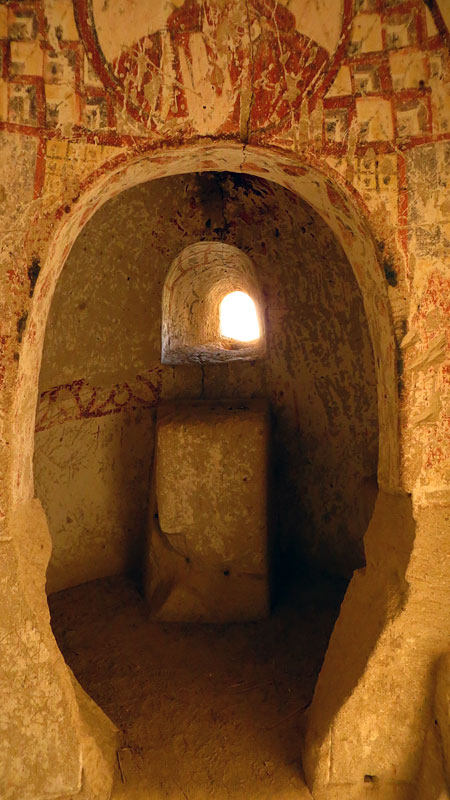 Nick climbing up to a cave church; our “guide” is behind him. Inside the cave church.

The hike through the rose valley is probably the highlight of my trip to Turkey so far. It was beautiful. The weather was perfect. And despite the fact that Göreme (and surrounding towns) are flooded with tourists like us, there were surprisingly few people on the trails.

We walked up and down the cliffs and canyons, exploring the caves and churches along the way. We picked grapes from the vines planted throughout the valley. At one point, we met a man named Hussein who was harvesting walnuts. He asked us to stop and chat with him a bit, and he shared his (bitter) fruit with us.

“Walnuts: original Viagra,” Hussein laughed as he cut the walnuts apart with his knife. 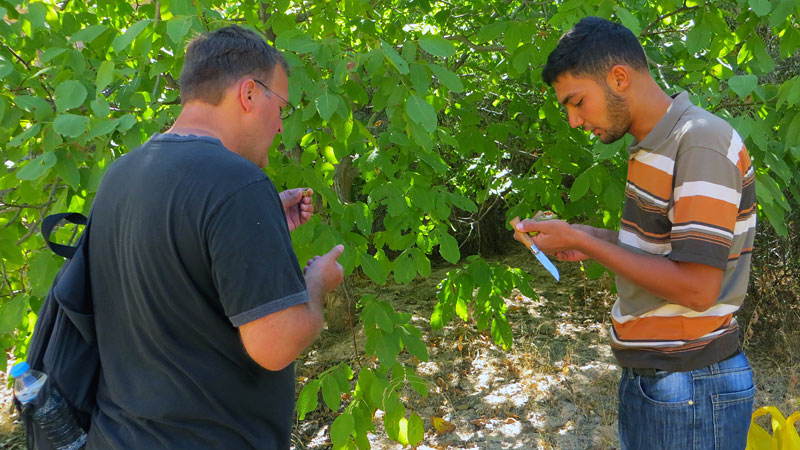 Our path twisted up and around and down again. Eventually we passed a British couple who advised us not to miss the cave church up ahead. “It’s magnificent,” they said. And it was.

We crossed a wooden bridge into the church and began exploring. My old fear of heights has mostly vanished, so I did stupid stuff like crawling out windows of the church so that I could scale the cliff outside to reach other sections. At one point, I was afraid I wouldn’t be able to get back down except by falling!

The day had grown hot, and I had grown sweaty. For much of the morning (and afternoon), I ran around without a shirt on, which is totally not my normal style. In the magnificent cave church, we bumped into an Australian man (also shirtless) and his wife. They live in the area and visit the caves often. They noted that the bridge into the church wasn’t there a month ago. 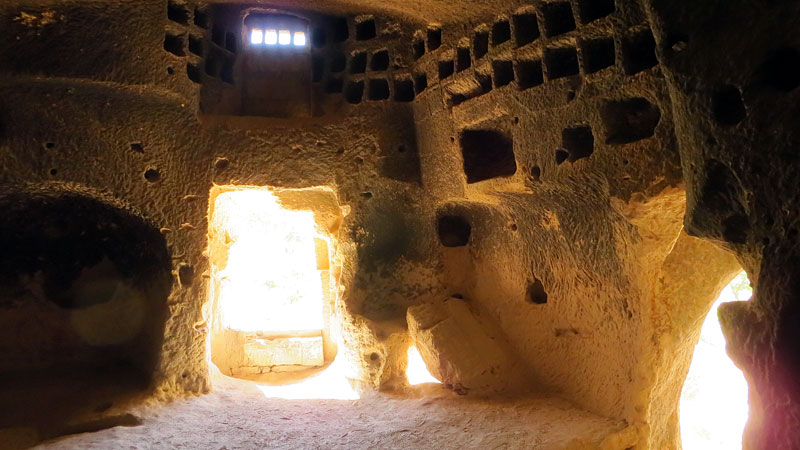 Inside a cave church. This is more primitive than some of the ones we saw.

After we’d finished the rose valley, we walked back to Göreme under the blazing sun. Over four hours, we hiked about twelve kilometers (or 7.5 miles). In town, we scarfed down a hearty meal.

In the evening, we took a trip to a nearby cultural center to see the whirling dervish ceremony, which was fantastic. Nick and I were mesmerized. It cost €30 each and lasted 45 minutes, which seems like a steep price. But we’re both glad we saw it. It was haunting and beautiful. The music was enchanting, and unlike anything I’ve ever heard.

Unfortunately, photos of this religious ceremony were not allowed, but I found this clip on YouTube, which shows something similar.

Not the ceremony we saw, but similar

This morning, we rose at 5am to participate in a tourist ritual. When you come to Cappadocia, you must ride the hot-air balloons.

Three weeks ago in Portland, I went hot-air ballooning with Kim. Our flight took off from the Aurora airport, and we drifted south past Woodburn. It was a peaceful flight, and it was fun to see my native region from a different perspective. 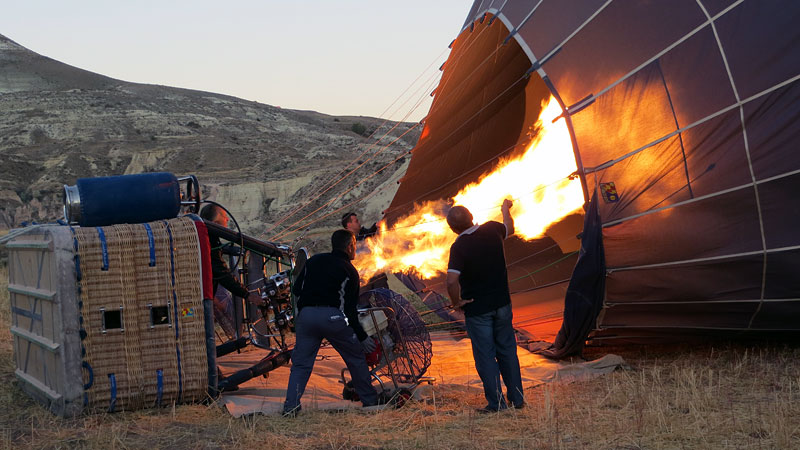 Today’s flight was different than the one back home. For one, we never reached the same altitudes. For another, we rose and descended over and over again, exploring the many valleys around Cappadocia.

Note: In a strange twist of fate, our pilot was the same shirtless Australian man that Nick and I had met in the cave church yesterday afternoon!

Another major difference between this flight and the one in Portland was that this time we were not alone. In Portland, Kim and I could see a couple of other balloons in the distance (in Newberg). Here, there were almost 100 balloons all taking off at once, and all within a few hundred meters of each other. The sky was crowded. 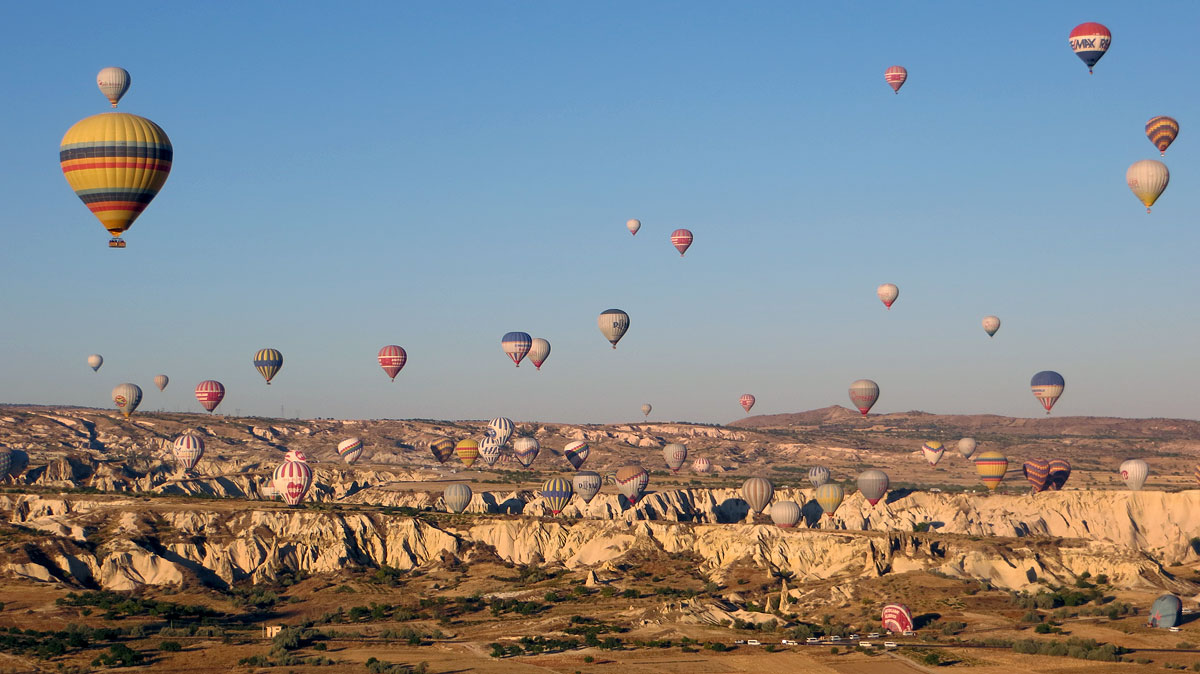 Taking the balloon ride was expensive. At €200 (or $275) each, it’s easily the most expensive single thing we’ll do on this trip. But, like the dervishes, this was an experience we’re glad we had. It’s once in a lifetime. 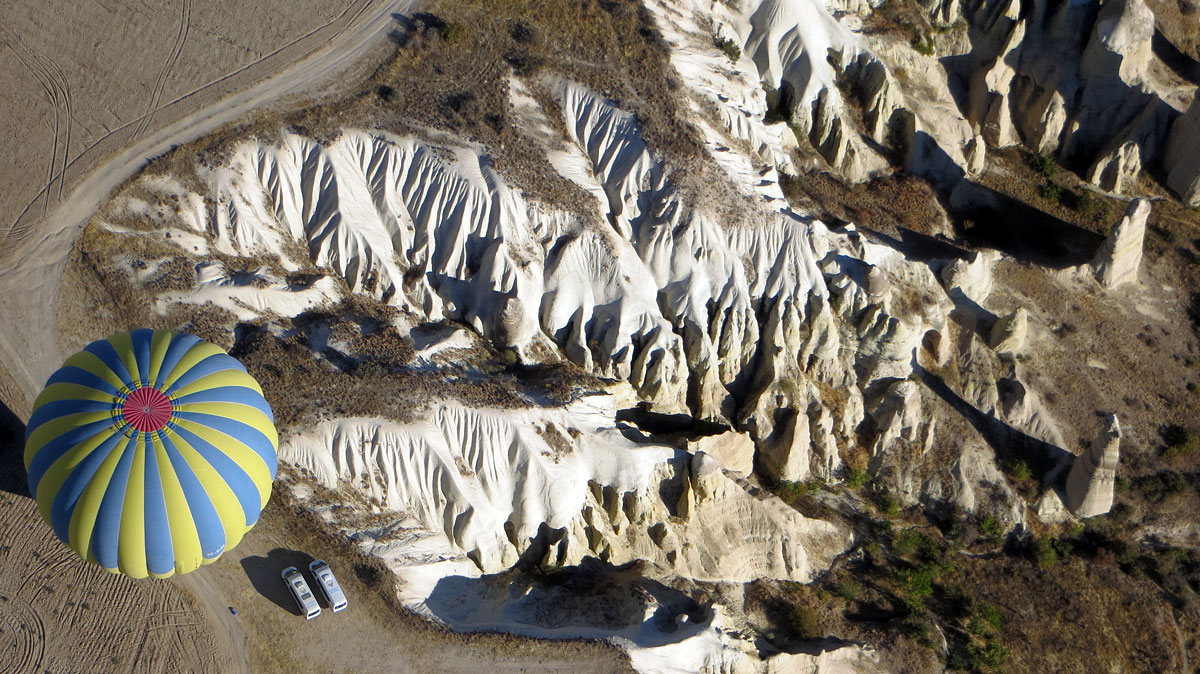 Cappadocia from above in a hot-air balloon

After seeing Cappadocia from the air, this afternoon we’re going to see it from the ground. We’ve booked a four-hour horseback ride, which ought to take us down and around some of the valleys and canyons we haven’t seen yet. Tomorrow, we’ll take a guided tour that touches on even more of the natural beauty around here. Wednesday, I plan to rent a motorbike or scooter, get a quick lesson, and then head out on my own.

There’s a lot to see here in Cappadocia — which means I ought to stop writing and get out there again to do stuff!