For me, this trip to Turkey is different from past trips in many ways. The biggest difference is that I can’t communicate. On every past visit to a foreign country, I’ve been able to get by with a bit of the native language (and lots of English).

Yes, there’s some English here, especially in tourist areas. But the deeper we get into Turkey, the less that’s true. Late last night (actually early this morning), we flew into Kayseri, launching point to Göreme in Cappadocia. From the moment we landed, we’ve been going on sign language and trust. (Trust that the other person gets our meaning — and we get theirs.)

So far, it’s worked. We took a taxi from the airport to the hotel. We checked in. We slept, ate breakfast, checked out. We took a taxi to the bus station. And we just bought two kilos of cured meat while waiting for our 11am bus to Göreme. 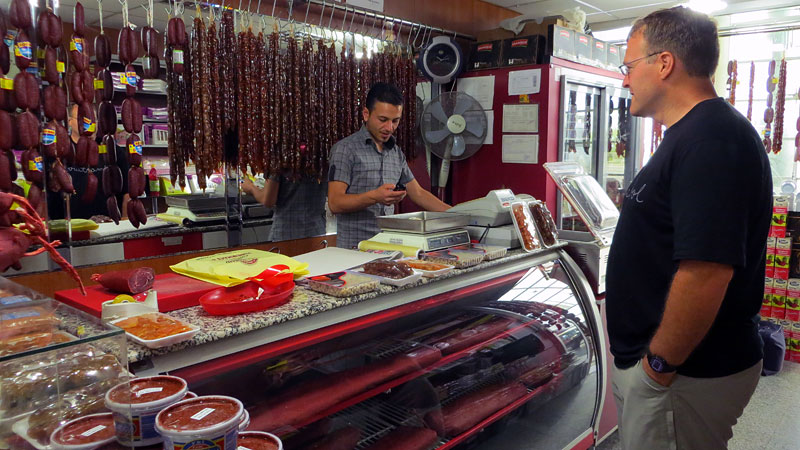 Nick, shopping for cured meat at the Kayseri bus station

For local, in-town transport, you don’t even have to got to the otogar. You can use a dolmuş, a sort of shared taxi. You find the van you want, pay the driver three lira (about $1.50US), and hop on. Once the dolmuş is full, it leaves for its destination.

For longer journeys, you have to purchase tickets on a coach. That’s a little more complicated, but not much — even if you don’t speak Turkish. When I need a ticket, I find the information booth at the otogar and give the name of my destination. The attendant always points me to a bus company that can get me there.

Then I walk up to that company’s ticket counter and repeat my destination. The clerk points to a clock to tell me when the next bus leaves, and is always able to show me the price in Turkish lira. And those prices! 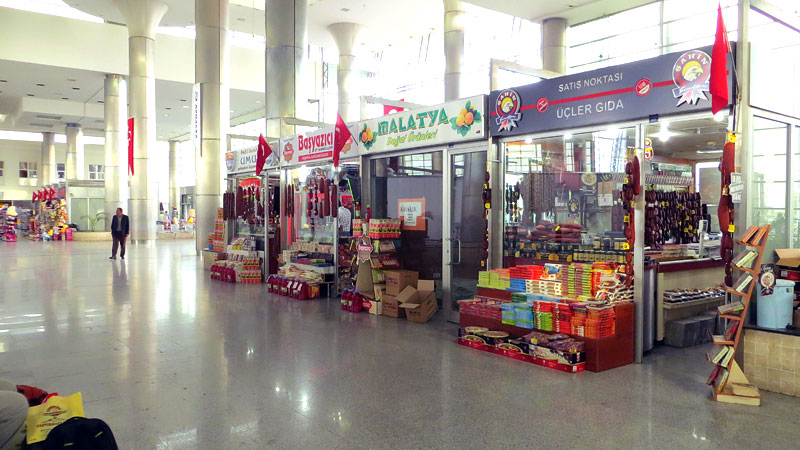 Inside the Kayseri bus station.

If you’re traveling on a budget, taking the bus is certainly the way to go. You save big bucks over a taxi or an airplane. (To get from Kayseri to Göreme by taxi would have cost between 180 and 220 lira. By bus, Nick and I were able to get there for 20 lira total. That’s a savings of $100!)

The downside? Buses take time. Often, lots of time. The bus from Istanbul to Izmir took us nine hours, but we coud have flown it in one. (It probably would have taken four hours total counting transfers to and from the airport.)

Here’s a run-down of our bus expenses (in time and money) so far:

There are other upsides to riding the bus:

The bus isn’t for every traveler. Using the bus requires patience. Things go wrong. Buses leave late (or early) and get flat tires. You meet…interesting people, for good and ill. 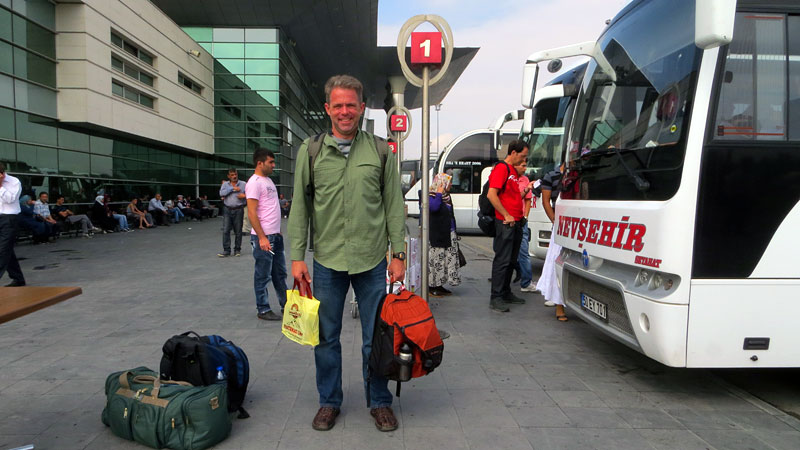 Back on the bus, y’all! Getting ready to board the bus to Nevşehir. Yes, I am sunburned.

Nick notes that the bus system here in Turkey is much like the train system in Italy and other parts of Europe. Everything is connected, and it’s very easy to get where you want. (The difference, of course, is that trains are faster.)

“It’s relaxing and scenic,” Nick says. “It’s very different than the United States. When I rode the bus in the U.S. — and I’ll admit this was 25 years ago — it was for people who couldn’t afford to fly, and it was not fun.”

He and I both thought buses would be more difficult. But they’re not. In fact, while I’m flying back to Istanbul in a few days, Nick plans to take the bus just for fun.

This morning, Nick and I took the otobüs from Kayseri to Nevşehir. The trip was unremarkable because I slept most of the way. One thing of note: As we neared Nevşehir, I spent about ten minutes chatting in Spanish with a man from Bilbao, Spain.

When we reached Nevşehir, the bus made several stops. The driver made sure to let me and Nick know when we’d reached ours. “Göreme?” we asked him as we reclaimed our bags from beneath the coach. “Otogar?” He motioned us down a side street. We followed his directions.

We expected to find a dolmuş (or two), but instead found ourselves outside a supermarket. We stopped to ask for directions. A group of schoolboys was gathered nearby, goofing off. “Where from?” asked the smallest of the boys. He stepped to the front of the group. His friends laughed.

“The United States,” I said, but that only confused him.

“Oh, America!” he said. His friends laughed. “Where you go now?” he asked.

“Oh,” he said. “Bus station is near. Maybe 100 meters.” He indicated the direction, but then he thought better of it. “Accompany me,” he said, and he started walking. We accompanied him, and so did his three friends.

Adi’s three friends repeated after him: “Nick. Nick.” They laughed.

Note: As we walked and talked, Adi’s friends would repeat words in English and laugh. Adi ignored them. So did I. Nick, for his part, was listening to them, trying to pick up words and phrases in Turkish.

“Yes,” I said, a little surprised. “Of course.” We stopped so I could write down my Facebook address on a slip of paper. (I’ll be interested to see if Adi finds me there and asks to be a friend.)

“How long have you been learning English?” I asked.

I laughed. I thought it would be too complicated to explain that I do tutor one person in English. Instead I said, “No, I’m not a teacher.”

“Forty-three,” repeated his friends. They laughed.

“Thirteen,” said Adi. And then he stopped walking. “We are here. Bus to Göreme will be here. Good-bye, John.” He extended his hand, and I shook it. He joined his friends and they left, laughing.